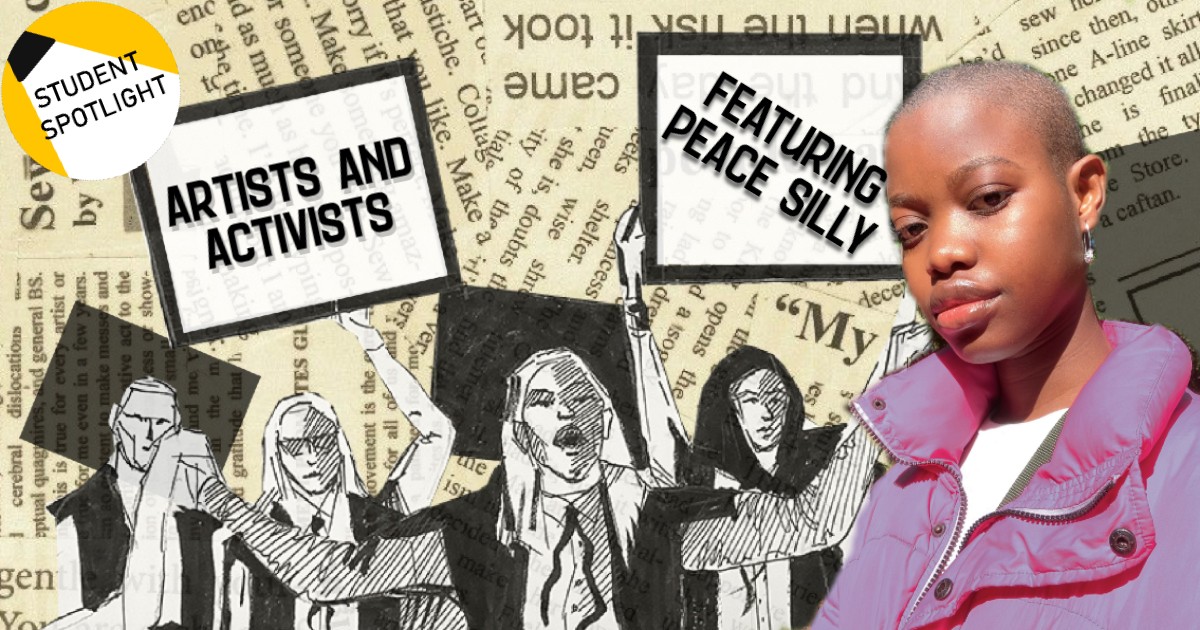 Artists and Activists: In conversation with Peace Silly on fighting period poverty

As part of our Artists and Activists series, I had the pleasure of interviewing Peace Silly, one of the founders of the youth-led non-profit organisation, PeriodLink. Since 2019, PeriodLink has worked to keep young people in the Volta and Upper East regions of Ghana in school by destigmatising periods and providing sustainable period products. Peace is a second-year studying French & Spanish at Oxford.

Could you give us a bit of background on your what has influenced your life and outlook thus far?

Spending my childhood in Togo was undoubtedly one of the most defining experiences of my life. I had a more or less communal upbringing in the sense that family did not stop at the house gate, but it extended to neighbors, family friends, etc. However, I also quickly realised as a kid that we did not all enjoy the same rights. Despite the pretence of democracy, Togo has been under the authoritarian rule of the Gnassingbe family since 1967. In this deeply oppressive climate, little effort is made to serve the people, and the difference in the lived experiences of the have and the have nots was and still is palpable. Every morning, I was taken to school on a motorbike (a fond memory now that I think of it), and on our way, I remember we would often ride past kids my age who were selling snacks by the roadside or begging for money. The immense discomfort that I felt those mornings still inhabits me and I can see how, in a way, it propels my desire to speak up against inequality.

That there needs to be a justice movement around a natural bodily process is a sad reminder of our failure in building societies that ensure basic dignity for all.

What inspired your activism in the menstrual justice movement?

I have always strongly believed in academic education as a tool of emancipation for all people. My friend Marina and I often discussed the issue of lack of access to education for girls, and I was aware that a number of systemic barriers prevented girls, especially in developing countries, from pursuing education to the same level as their male counterparts. However, I was shocked to find out the extent of the role that menstruation plays as a factor. Statistics show that 1 in 10 girls in Sub-Saharan Africa miss school during their periods.

Realising that many girls missed out on education because of a natural bodily process was appalling to me. Access to education is a fundamental right so, for me, working towards better menstrual health management for schoolgirls is a way to bridge the education gap between the sexes.

What do you think are some of the most important aims of the menstrual justice movement and what it has to offer?

I think the menstrual justice movement is ultimately a fight for equality. That there needs to be a justice movement around a natural bodily process is a sad reminder of our failure in building societies that ensure basic dignity for all. That said, I think the movement is bringing about positive change in two ways. The first is that those who menstruate are able to understand their bodies better as there has been relatively poor education around the topic until now. The second positive change is that everyone is understanding menstruation and the needs of those who experience it. This will hopefully allow us all to coexist better.

it is often very easy to engage in fights publicly while fostering an environment where those close to us are able to comfortably perpetuate the very things we claim to be fighting.

The stigma and taboo surrounding menstruation and period products is infamously widespread. Do you think that this is changing and what do you think is the best way that we can fight against the stigma?

While attitudes are changing for the better in general, taboos are still thriving in secluded communities in developing countries. For example, ‘tabooglobalperiods’ highlighted a community in Nepal where women are still made to isolate themselves while they bleed under a tradition known as Chhaupadi.

I think it is important to challenge those around us when they express sentiments rooted in stigma; it is often very easy to engage in fights publicly while fostering an environment where those close to us are able to comfortably perpetuate the very things we claim to be fighting. So we should do the work around us and also support the people and organisations that are doing it in places where it is most needed.

In countries where period poverty is most severe, people cannot afford disposable menstrual products so sustainable alternatives are often the solution by reason of necessity. In developed countries, however, campaigns tend to revolve around the reduction of the price of menstrual products, such as the removal of tax on pads and tampons. I think that as part of a wider effort to take responsibility for the impact of our excessive consumerism on the rest of the world, we, in the developed world, should really start placing more emphasis on sustainability when it comes to menstrual health management.

PeriodLink focuses on targeted change in the Volta and Upper East region of Ghana. Could you tell us the background for this decision and why it was made?

We first visited the Volta region because we had contacts in the community. This gave us the advantage of liaising with the people we already knew in order to have the work directed by the local community itself. Later, we learned that in upper east Ghana, many farmers were and still are struggling to cope with the droughts caused by rising temperatures and lack of access to water. As a result, students, often girls, have to travel miles to fetch water daily during school hours. When we came into contact with GAYO (a Ghanaian organisation that has experience working with the community of Kandiga in upper east Ghana), we decided to collaborate to launch a project that addresses period poverty, access to education, and the climate crisis. We are currently running a campaign and raising funds to build water boreholes in the region and thanks to the generosity of our donors, we have raised over £5,000 of the £10,000 target. In the future, we hope to connect with more communities and organise more projects in which the beneficiaries are able to take center stage in their realisation.

if we need to take a picture with the community members of a village to promote a project that we are working on, does there need to be a white person standing in the middle of that picture? What narrative would this perpetuate?

The recent discourse around anti-racism has shed light on the racist practices within humanitarian and charitable work in regions of the ‘Global South’. Was this culture in the activism sector something that you noticed when working in Ghana  and is this something that you were conscious of when founding PeriodLink?

Of course. In my observations, one of the ways this manifests itself is through the phenomenon now widely known as white-saviourism. I think part of the solution to this goes back to not building a relationship whereby we come in as the champions with all the solutions, but rather one where we listen to locals and make sure they have directorship in the work being carried out. Active collaboration is imperative. It is also paramount for us to be aware of the image that we project in the media. And it comes down to asking ourselves the little questions. For example, if we need to take a picture with the community members of a village to promote a project that we are working on, does there need to be a white person standing in the middle of that picture? What narrative would this perpetuate?

How do you think the pandemic has affected those who lack access to period products? How have you found working through PeriodLink under pandemic conditions?

The pandemic has visibly exacerbated the financial difficulties faced by many people and, for those who already struggled to access period products, it is sure that the situation has worsened for them. Some students who accessed products through their school would have also lost access due to school closures in many countries, including the UK. This is why it is important that we continually reform our systems so that in times of crisis those who are most vulnerable are protected as much as possible.

At PeriodLink, we have been forced to delay our plans, and this is unfortunate because periods don’t stop during pandemics. However, things are starting to improve across the globe and we hope to resume our activities soon.

What is the most rewarding part of having founded with PeriodLink and what do you hope to achieve through it?

Founding and running PeriodLink alongside other young people has taught me a lot about community and collaboration. The dream that I have is for us to reach a point where menstruation is no longer a reason a schoolgirl has to miss classes or drop out of school. Until then, I hope that we will keep learning and reaching more communities.

You can find out more about PeriodLink here