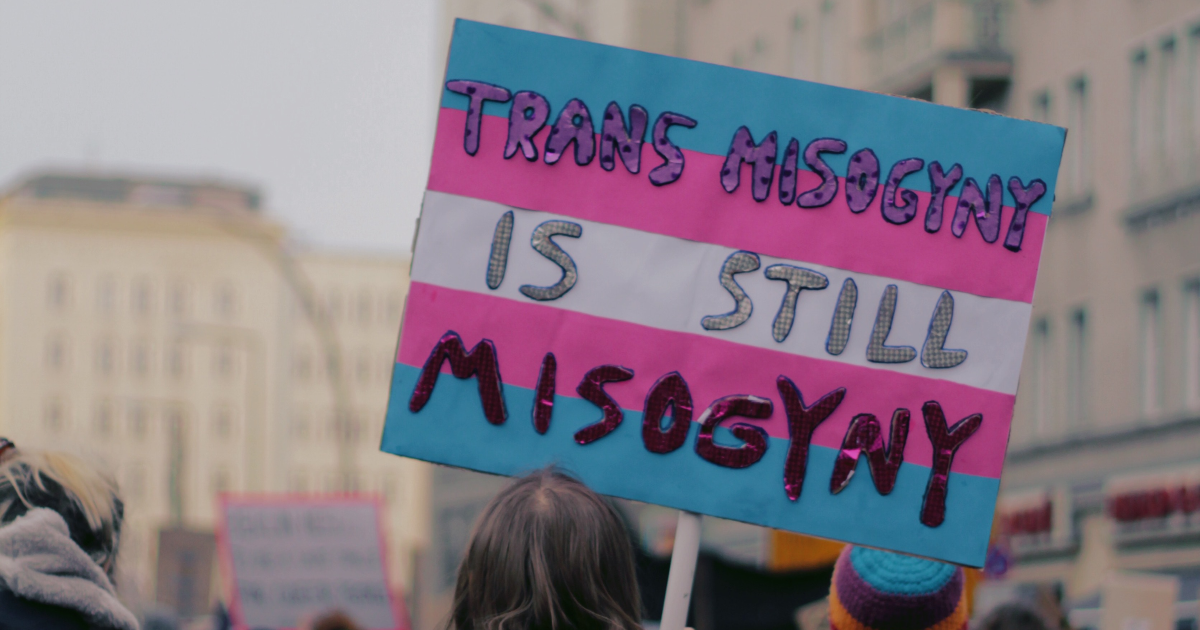 The greater systemic impact of transphobia in the UK

Image Description: A sign in the trans flag colours that reads: ‘Trans misogyny is still misogyny’

Beyond their obvious implicit transphobia, there is an odd narrative being spun by UK-based Trans Exclusionary Radical Feminists (TERFs, a term describing those who actively and deliberately attempt to exclude trans people, and especially trans women, from their discussions of equality) as of late that, as a trans woman myself, baffles me.

Much of their argument surrounding this supposed ‘issue’ (regardless of the fact that inherently it isn’t even an issue to be discussed in the first place), stems from their strange claim that thousands of children and young adults are being rushed into medically transitioning through hormone therapy and that ‘hormones have become the new anti-depressants’, and yet, if they bothered to actually research or try to understand trans people’s situations in the UK, they would see that not only are young adults and especially children not being ‘rushed’ into hormone therapy and transitioning, but that it is in fact actively difficult and time-consuming to even get to this stage.

Not only are young adults and especially children not being ‘rushed’ into hormone therapy and transitioning, but it is in fact actively difficult and time-consuming to even get to this stage.

The only way in which I have been able to be medically transitioning at the age I am given the age I came out to myself (and the age I was able to come out publicly which was much later), is through highly expensive yet still rigorously gatekeeping private healthcare (my experiences of which I may go into another time), which I was only able to access with the help of a GoFundMe campaign.

The ridiculous and extreme length of the wait times for the NHS Gender Identity Clinics is well documented at this point, but to put it in perspective, I was referred in October 2019, and I have heard not a single thing since then to the point where I often second guess whether I was even referred in the first place. I have heard stories of people waiting 5+ years before they were even seen for a first appointment, let alone be able to start hormone therapy.

Regardless of the major fact that under-17-year-olds are legally not even allowed to be prescribed hormones in this country for transgender hormone therapy purposes and only reversible puberty blockers, this wait not only renders the notion of ‘rushing’ as completely misinformed and ridiculous, but makes the outrage around transitioning children pointless too, as the UK’s system makes it extremely difficult for them to even get puberty blockers in time before they are legally adults because of how long they would be waiting from initial referring.

The UK’s system makes it extremely difficult for them to even get puberty blockers in time before they are legally adults because of how long they would be waiting from initial referring.

Although one might argue that it is a bit of a moot point to argue this, considering we are dispelling TERFs harmfully uninformed and hysterical reasonings with the reality of the NHS and UK government’s equally harmful understaffed and underpaid gender identity services, this rhetoric that they are pushing damages any potential for this system to be improved, which in the process would improve the lives and mental health of trans youth in general.

By using their large platforms to spread false rumours about the trans system, high profile TERFs are preventing any further change by convincing people and the government that the system is actually too fast, not too slow, even though it is the exact opposite. This includes the added facts that you must ask your GP to be referred, making it luck whether they will actually be trans-friendly enough to accept your request, and the obvious social difficulties that are faced with coming out in the first place because of parental and other disapproval.

By spreading misinformation and lies about how ‘the NHS are forcing our kids to transition’, when in fact from my experience the system seems to be actively doing its best to halt transition for as long as possible, TERFs are preventing any greater outrage which would force the government to change the laws, and instead lets them sit in complacency regarding the matter. This has been seen most starkly in the rejection of the calls for the ability to legally self-identify as your gender, with ministers saying it was not the “top priority”. This basic notion of self-identification is just another example of how far the UK is from true transgender acceptance and equality, leaving many trans people alone and without support.

TERFs are preventing any greater outrage which would force the government to change the laws, and instead lets them sit in complacency regarding the matter.

The trans system in the UK still has miles to go before this country can even begin to be thought of as offering even the rudimentary basics for satisfactory care for the lives of trans people. These wait times and harmful gatekeeping that is found within the NHS’s gender identity system not only deeply harm many trans youths’ mental health, but further discourage coming out or any attempt to transition, and further encourage the types of passive aggressive transphobia that is found embedded within cultural thought as a whole.

I can only mainly talk from my experiences, but an example of this is the way in which my parents used the knowledge of these wait times to prevent me from socially transitioning and as a buffer for them to ‘hope’ that I would move on from this ‘phase’ and ‘go back to normal’, preventing them from ever attempting to accept or adjust their attitude. If the system remains the way it is, who knows how many more trans lives will be affected in the process, not only in the lack of access to life-saving healthcare, but also in the encouragement of a continued deeper rooting of transphobia within our society.

TERFs in this way, are not only upsetting and harming trans people directly with their rhetoric, but also preventing any further change in the more passive transphobia found everywhere in the UK currently, leaving us behind and struggling, whilst those in charge are allowed to remain too despondent to act.