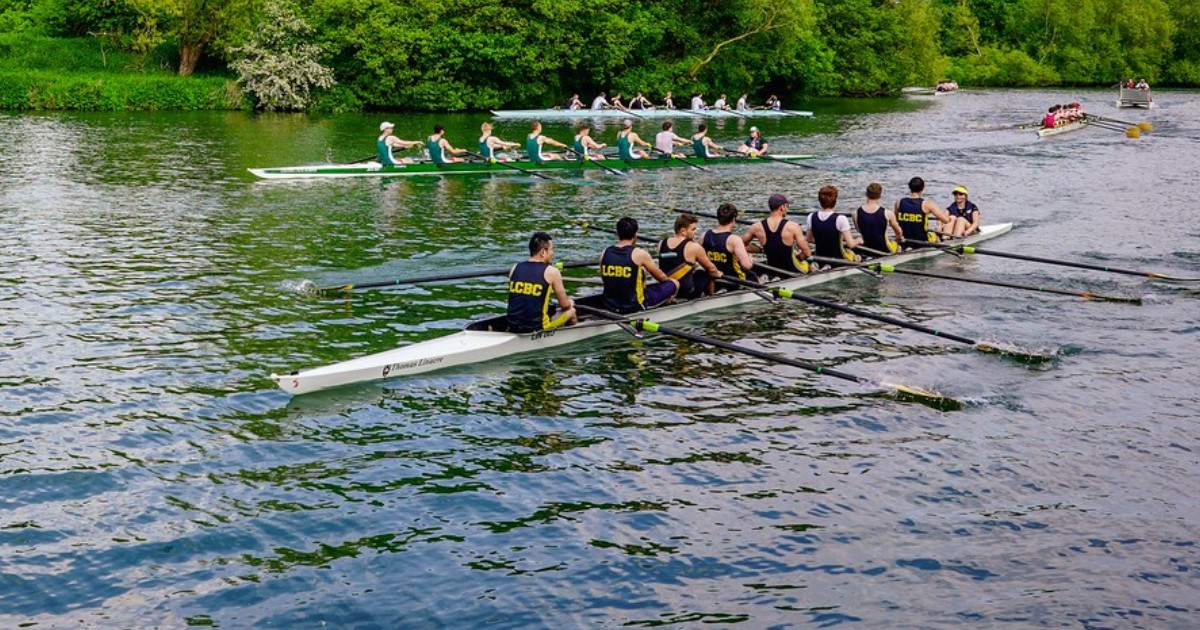 Image description: an eight on the river in Oxford, viewed from the river bank on a sunny day

A boat full of college students, rowing down the stretch of the Isis in Christchurch Meadows, whilst the less sporty amongst us watch whilst drinking pimms is one of the more iconic ‘Oxford’ images of usual term time. But over the past two years, the usual functioning of college rowing has been increasingly fraught.

One part of this is river conditions. Over the past two years, the number of red and amber flags displayed for the river have been dramatically increased, meaning that the safety of the river is reduced, and only very experienced crews, if anyone, can launch onto the river. Anyone that has attended any races in their time at Oxford will know that the standard varies dramatically. Whilst the top of the bumps table contains experienced and athletic rowers, the bottom often involves crews almost entirely made up of novices, who often struggle to steer entirely correctly. With difficult river conditions, this goes from vaguely amusing to a genuine safety concern very quickly. It simply is not permissible for an untrained crew or inexperienced cox to be let onto the water in many of the conditions which are becoming increasingly commonplace.

over the past two years, the usual functioning of college rowing has been increasingly fraught

I spoke to Kate Halcrow, a cox, and secretary of Lincoln College Boathouse, who has years of experience in the rowing scene. Kate told me that there had been “pockets of time where certain coxes who have a lot of experience have had the permission and ability to go out on the water with mostly senior crews”, but that beyond this, river conditions had meant an increased reliance on land training such as circuits.

Boxing Day 2020 saw the highest river level on the Isis since 2014, and the river is still currently on an amber flag. Anu Dudhia runs the page that rowers use to check the current conditions of the river. He told me that the past few winters have been “particularly wet”, leading to the “almost total loss” of rowing in Michaelmas 2019 and Hilary 2020, including the cancelling of the Torpids races. However, Dudhia added that in his personal opinion, we shouldn’t take this as an indication of future trends or predictions.

But it is not just difficult river conditions that have impacted Oxford’s rowing scene: Kate tells me that it has been a case of “combination of concerns”. As with everything else, the impact of covid has been severe. Over the past year, it has been almost impossible for full eights to go on the river. Restrictions on household mixing means largely only 4s and singles are permissible. Unlike other team sports, there is limited scope of any level of ‘quasi-rowing’ – as one person I spoke to said “either you’re rowing, or you’re not”. British Rowing’s current advice is that affiliated clubs close all their facilities, including indoor training facilities, and that competitions should not take place. Where boats can be accessed, launched and revered without accessing the club, in a local area, and individually, rowing is allowed if waterway authorities also permit this. But these caveats are unlikely to apply to students in Oxford: it seems highly unlikely that any students are storing their own personal rowing boat in their accommodation.

Over the past year, it has been almost impossible for full eights to go on the river

It is also not only national restrictions and British Rowing guidelines that must be adhered to. OURCs guidelines, and college specific risk assessments must also all be taken into account before rowers can start to train and get on the river. Different clubs have taken different attitudes, from the very cautious to the surprisingly innovative. Either way, it is a case of working with very little, to achieve as much as possible, whilst also keeping everyone involved safe. Any time on the water is appreciated now: Kate told me that “everyone’s like, oh, we’re out on the water in any capacity, that’s wonderful!”

But as Dudhia points out, coupled with the loss of rowing in the 2 pre-covid terms “all college boat clubs are now missing two years’ worth of rowers and coxes that would have been normally trained up from novices”. An ex-Captain of a college boathouse told me that he wasn’t sure if it would be ‘responsible or safe’ for inexperienced rowers to be taking to the water once restrictions are over: a few more experienced people will have to take on far more responsibilities. The culture of complete novices finding a passion for rowing on arrival in Oxford has clearly been effected by the past two years. One undergraduate rower I spoke to said: “there’s definitely concerns for how on earth rowing will continue in coming years, as its such a specialised sport that relies on more experienced students to recruit and train up novices.” When those with experience graduate, who will be able to safely take over that role? However, there is a real optimism in the people I have spoken to that they have both retained enough interest, and recruited enough new people, even without actual rowing, to leave the pandemic functioning, and strong. As the ex-Captain pointed out, “the people who have stuck with rowing through last year and this year are most likely going to be people who know they want to do reading and are kind of willing to wait this out.

“there’s definitely concerns for how on earth rowing will continue in coming years, as its such a specialised sport that relies on more experienced students to recruit and train up novices.”

The rowing scene has not simply just stopped. Training, in general fitness and in ‘ergs’ (rowing machine based practise) were still possible when river conditions were difficult, and have been able to continue in a variety of forms since the pandemic began. Recruitment “hasn’t been awful” according to undergrads I spoke to. Zoom in particular seems to have been a particular lifeline. The impact of these has not just been maintaining numbers for when rowing returns, which by all accounts they have done a good job at. Kate told me that they were still recruiting and retaining novice rowers: “we’ve retained them through online circuits and a good sense of teamwork outside of just being on the river that’s allowed us to gain new members who haven’t been in the sport at all. And it might be because they want some kind of personal contact with a group through college, it might be because they want some kind of impetus for getting fit, they want it for mental health”. Kate told me that for the women involved in rowing at Lincoln, the sessions they have been running have been somewhat of a lifeline. There is a sense that the men’s sides are struggling slightly more, having traditionally focussed more on the competitive side of rowing, rather than the camaraderie of simply being involved in a community.

The rowing scene has not simply just stopped

Some boatclubs are likely to be effected more strongly than others by the events of the past year. This might effect smaller clubs particularly, or less known for their culture of ‘giving it a go’. Kate accepts that it is unavoidable that land training is ‘less enticing’ to sportspeople: “you end up with slightly diminished numbers maybe greatly diminished numbers, depending on the environment of different clubs”. However, the relatively recent introduction of composite crew policies should meant that college clubs will not have to fold, and will be supported by other boatclubs to participate in races. Where one college is missing a cox, or needs a couple more people for their second boat, it is hoped that other clubs can step in to help them.

Necessity, as Kate pointed out, is the mother of invention – clubs have been forced to become more creative and grateful for what they could do. For coxes just to see rowers faces, and vice versa, was really important, even if this was through a screen. It seems to Kate that “happily many people are just sort of waiting until we can all be back, working out together and racing together and on the water together, rather than what I feared in the very beginning, which was just clubs crumbling”. A real sense of innovation and grim determination to make it work once it can shone through from everyone I spoke with. There may be troubled waters, but Oxford College Rowing is determined to stay afloat.