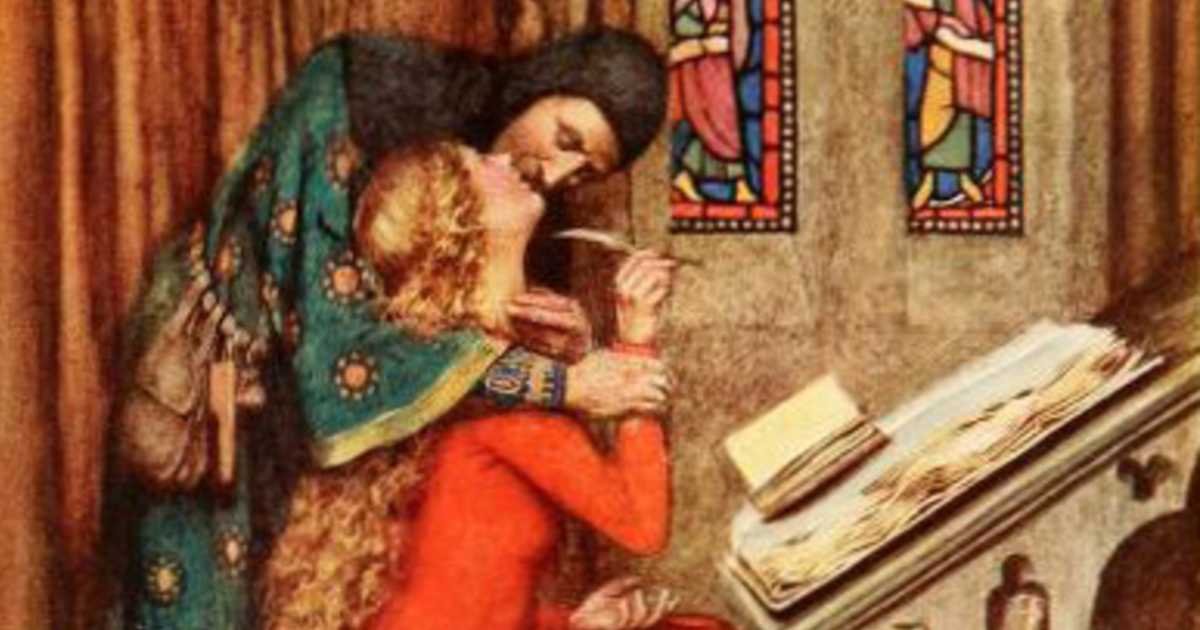 The Letters of Abelard and Heloise: a medieval romance for the modern day

Image description: An illustration of Abelard and Heloise kissing while Heloise writes a letter by artist Eleanor Fortescue-Brickdale

In the past, Abelard and Heloise were names ranked alongside Romeo and Juliet, or Dante and Beatrice, as an everlasting tale of passionate romance and forbidden love. I can imagine most students reading this article, however, are largely acquainted with Shakespeare’s creations, with Dante’s Inferno superseding his love of Beatrice, with Abelard and Heloise entirely unknown. This is hardly a criticism: the letters of Abelard and Heloise are written in a style that nowadays appears unwieldy, often circumventing the point of the letters through a myriad of Biblical citations. Nevertheless, having read their letters recently, specifically the 1974 translation by Betty Radice, I find that there is something there that is valuable to anyone wishing to engage with a historical romance which, in many ways, is strikingly original compared to their more popular brethren – and it’s rendered so much more interesting by virtue of the fact that it’s all true.

Peter Abelard (c. 1079-1142) was a French logician, philosopher, and teacher during the 12th century; the schools he established in Paris during his lifetime went on to form the foundation for the University of Paris, and by extension the model of the medieval university. Indeed, Henry II banning Englishmen from attending the University of Paris in 1197 is at times seen as one of the reasons for the foundation of Oxford as a great centre of learning. Heloise (c. 1100(?)-1163-4) was one of his students, and later an abbess of the Paraclete, a site founded by Abelard during his wandering years. We know of their love through Abelard’s Historia Calamitatum (Story of My Misfortunes), an open letter which came to influence the autobiographical genre of writing, and through the personal correspondence of the two.

I call these letters original because they avoid the tropes and the style which would undoubtedly burden this story if it were to be written in the modern day. The authenticity of the time is obvious in every word, in every passage cited

To give a brief summation of their romance, Heloise was the niece of a curate in Paris, and was taught by Abelard at his request. They fell in love, and according to the letters it was quite the whirlwind romance, with Abelard (a respected scholar) practically abandoning his work to write endless love songs for his beloved. Unfortunately, such publicity, and Heloise’s pregnancy, brought the attention of her uncle, and an offer was made by Abelard: he would marry Heloise, but the marriage would be kept secret to preserve his reputation as a teacher. At that time they were often conflated with a priest and would have certain standards applied to their behaviour. The uncle agreed, before betraying the two, spreading the word of their marriage, and eventually sending several thugs to forcibly castrate Abelard. Afterwards, Abelard became an abbot of a monastery which (apparently) tried to kill him on multiple occasions, and Heloise went to a nunnery.

Their letters are passionately written, by a woman who was always opposed to marrying Abelard, both on the grounds of domestic life weighing down a philosopher who should, ideally, keep himself isolated from the world, and to keep his reputation as sterling as possible. ‘If Augustus, Emperor of the whole world, thought fit to honour me with marriage and conferred all the earth on me to possess for ever, it would be dearer and more honourable to me to be called not his empress but your whore’. Spicy stuff. We read the personal correspondences of two impeccably educated and incredibly intelligent people, who are kept apart by virtue of their occupations, and their history. Abelard comforts her from afar, trying to help her grow accustomed to her new role as a nun, and even gives her land and a monastic rule to establish her own nunnery when her order is thrown out of their original home. In response, she engages with him as an equal, and after his death obtained absolution for his sins, incurred through his constant strife with prominent church figures, from Peter the Venerable, abbot of Cluny.

Heloise curses her hypocrisy of loving God as a nun while still loving Abelard as a woman. She wishes nothing more than to return to him – yet that is obviously an impossibility.

I call these letters original because they avoid the tropes and the style which would undoubtedly burden this story if it were to be written in the modern day. The authenticity of the time is obvious in every word, in every passage cited, in every stylistic choice or rhetorical flourish. The hardships which the two endured were enormous: physical mutilation and a constantly attacked reputation for Abelard, and near-constant separation for the both of them.

In a modern retelling, the Church would be the undisputed villains, their patriarchal menace shattering this pure love. Yet Abelard and Heloise never lose their faith – though Heloise wrestles with her own. She curses her hypocrisy of loving God as a nun while still loving Abelard as a woman. She wishes nothing more than to return to him – yet that is obviously an impossibility. And he does his best to help her from afar, comforting her and attempting to renew her faith.

One of the more poignant examples of this is the nunnery which she established later in life. In his years as a wandering teacher, Abelard taught at a place in Ferreux-Quincey. He did not develop this land with his wealth (for he had none), but it was built by his students who flocked to his side. And years later, this refuge for him in his years of exile from Paris, became a refuge for Heloise in her time of exile. The name of this home? He called it ‘the Paraclete’, meaning ‘one who consoles’, a term applied to the Holy Spirit in the Bible. Stripping away the intense scholastic merit of the two, we have a touching, and immortal, story of two people divided by circumstance, who nevertheless long to be together. I find it difficult to imagine a more appropriate tale for our own times.