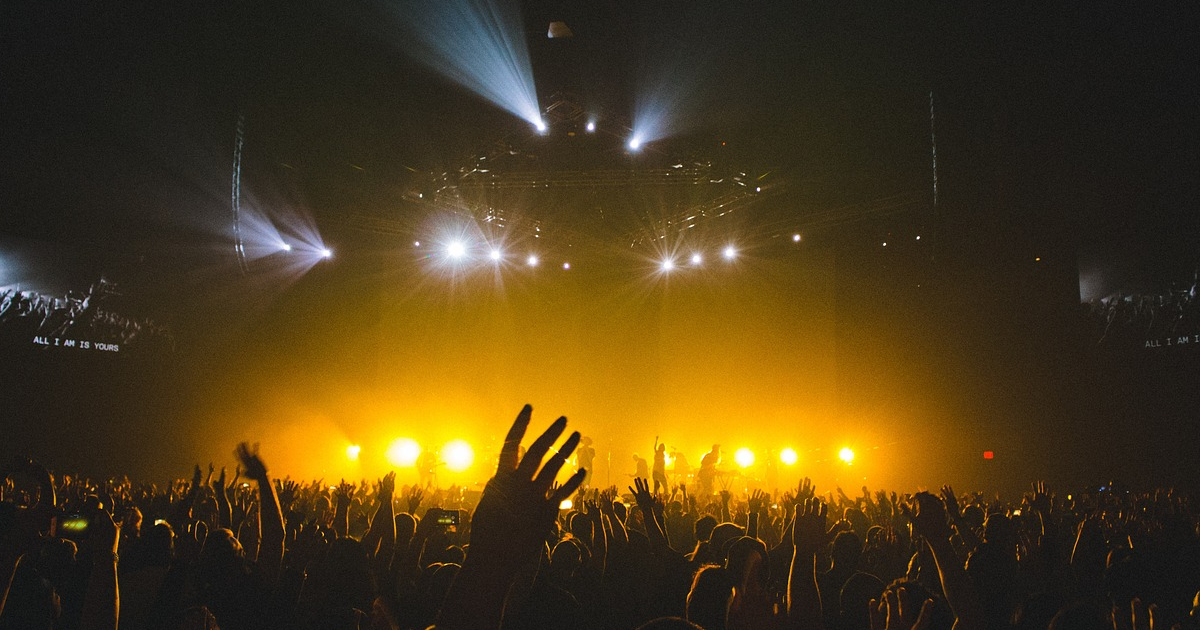 Image Description: A crowd in a concert venue, a silhouette of a hand is in focus on a background of yellow lighting.

In better times, concerts were easily my favourite night out. There’s something about the ebb and flow of a crowd that makes music that much more thrilling. I have very vivid memories of losing my friends in the bustle and learning to be content among strangers who offered me warm beers and cigarette hits. It’s why the holy melody of “Menswear’ by the 1975 resonates with me to this day. I was 16 when Matty Healy drank an entire bottle of red on stage and let the synths pick up the slack. The kick of lyrics at the end of the song sent the crowd into a wave of rhythm: phones down, eyes closed. It was warm and smelled of sweat and perfume. A haze of smoke lingered above the crowd and dissipated amongst the soft, revelatory applause.

It is an image that seems almost anti-Covid. To love a crowd nowadays is blasphemy. Sharing cigarettes with strangers is sacrilegious. I do find myself missing this sort of close anonymity— that perfect anticipatory discomfort before the band comes out. I consider myself an introvert, and moments like these functioned as a much-needed escape from my own isolated consciousness. Music unites crowds. Covid disperses them. We know this.

This brings me to my first and only encounter with “Live music” during the pandemic: a virtual Dua Lipa concert. I am, notably, not a huge Dua Lipa fan. My friend, however, is. She bought the ticket and declared it a lady’s night. We gathered the ciders and I, my personal bottle of white, and borrowed a friend’s projector to make it even more concert-esque. Leaning against pillows and each other, we waited for the “live” performance to begin. Certainly, if there is any way to enjoy this online solution to entertainment, it is alongside friends you adore and have no risk of losing in any hubbub.

To love a crowd nowadays is blasphemy. Sharing cigarettes with strangers is sacrilegious.

The “live performance” was admittedly much like an extended music video. That being said, I was pretty happy to hazily watch Dua Lipa look incredible for an hour. Have you seen this woman? Feminine beauty paired with a lovely voice is really something else – but I digress.

The show itself was a bit underwhelming. My friends and I noted that Dua Lipa never actually addressed the audience or thanked us for watching. Forgive our self-righteousness, but it’s nice to be acknowledged as a supportive fan! It’s one of those personal aspects of a concert that makes you feel connected to the artist on stage, and that was somewhat lost here. We definitely felt more like observers than participants. Later on, there was even a strange appearance of Elton John and a brief rendition of “Rocket Man”. My friends and I were somewhat baffled by this artistic combo. To introduce the legend that is Elton John, in line with Lipa’s sort of intergalactic theme, was certainly a bold choice. Yet, the fact that he barely sang at all seemed like a bit of a cop-out. Just because you can, Dua, doesn’t mean you should.

With that being said, we ended up having a pretty fun night together- although I think that this was more due to the company than it was the performance itself.  I danced and sang along to the three songs I knew, and we laughed as my other friend fangirled over each and every song. If you’re a live-music lover like me, it’s definitely pretty easy to be critical of these new entertainment formats – but that’s something I tried and succeeded at leaving behind this night. I wanted to experience the “concert” as a form of digital performance rather than criticize it for everything that it couldn’t be. It almost seems unfair to try to compare these online events to live music. In the end, you can’t really imitate the hum of a music-fueled crowd on any sized screen.

Recalling what was and what will eventually be, certainly makes such online experiences a tad bittersweet, but it also draws you closer to the company you do surround yourself with.

For fifteen pounds, I would definitely attend one of these online performances again. If you find yourself with a similar opportunity, I encourage you to embrace it as well. Whip up some cocktails with friends to get yourself in the mood and definitely opt for a screen bigger than a laptop. It may not be the full concert experience, but there’s no use in rejecting perhaps the next best thing. If it’s not everything you dreamed of, at least It will give you moments (i.e. Elton John’s oddly brief appearance) to make fun of.

Even writing this piece has made me a little more sentimental for the concert crowd. I think that’s okay in times like these. Recalling what was and what will eventually be, certainly makes such online experiences a tad bittersweet, but it also draws you closer to the company you do surround yourself with. It’s akin to picking out your favourites from a crowd of strangers and dancing with them in a dark corner of the concert hall.