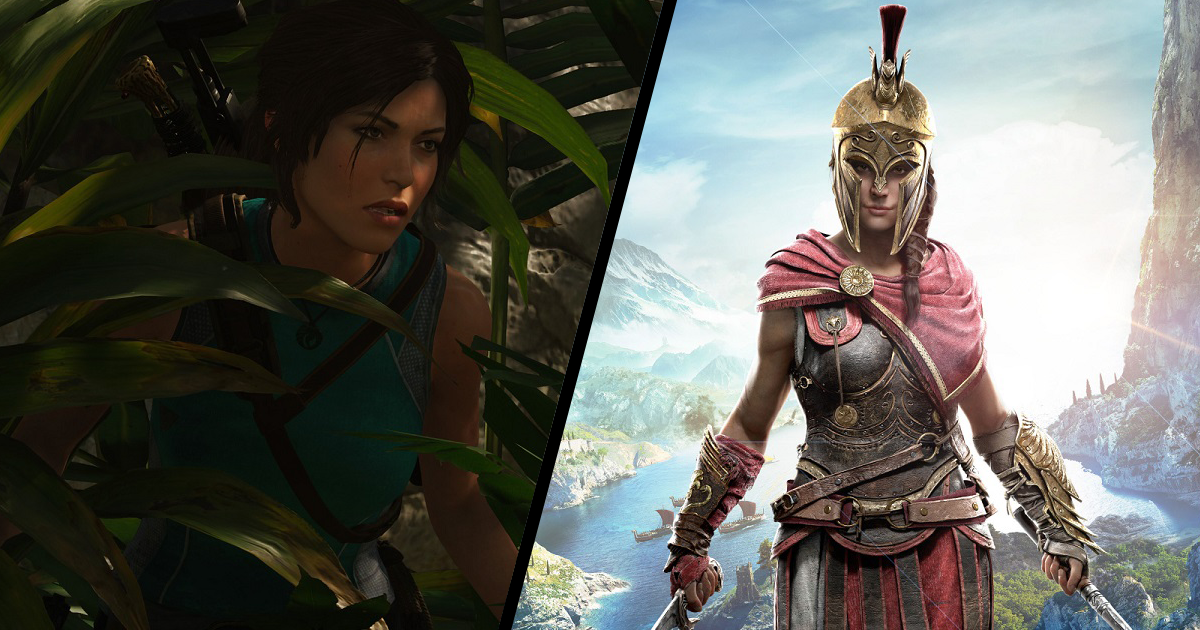 A portrait of a gamer as a young girl

Only 18% of the computer games announced at E3 in 2020 had a female protagonist. Yes, this is a dramatic increase from the 2% in 2016 but the number is still woefully low, particularly when Savanta has proven the gaming industry to now be a 50/50 split. Despite these somewhat embarrassing statistics, I can count myself lucky that the first face I ever saw on a computer game was actually woman worthy of icon status – Lara Croft.

Yes, everyone’s favourite tomb raider will probably never be able to escape the male gaze (thanks Eidos for putting her in booty shorts, great job on gender representation there) but to little me she was, and perhaps will always be, more. One of my earliest gaming memories was sitting on my dad’s knee playing Tomb Raider: Anniversary – I must have been about four or five because my hands were still too small to properly hold the mouse.

I don’t remember noticing her spandex, I remember an independent woman who refused to conform to expectations, especially those set by men … and she raided tombs, scaled pyramids and fought winged devil things in the process, what’s a 5-year-old girl obsessed with climbing literally everything not to like?

I remember an independent woman who refused to conform to expectations, especially those set by men

Yes, I was probably much too young to be watching, I definitely had many a nightmare about the chamber of Damocles – a tomb which involves the huge sword of Damocles suddenly falling down on Lara’s head in a jump scare that (embarrassingly) still gets me now! When you’re five earning the right to swing from the rafters of Croft Manor is the most exciting thing ever, even if your dad does most of the controlling. When I flew solo seven or so years later I have to say I did cringe to remember just how psyched I was to play the tutorial level.

The first game I properly played was ArenaNet’s Guild Wars 2. It came out right when I was starting secondary school, I know this because it was the first thing I downloaded onto my new laptop. This was a highly important moment because it meant I could now play side-by-side with my dad; I was quick to emphasise how my Necromancer was way cooler than his Mesmer (I didn’t know really know exactly what Mesmer was, and to be honest I still don’t, but I knew it couldn’t be cooler than a sorcerer that literally raises the dead). Guild Wars 2 taught me the gameplay basics; I quickly became a dab hand at stacking spells, clunky combat quirks and the grimness that is grinding.

I also learnt to game the system. I remember an interesting gender discussion when dungeon raiding. I had thought that my real gender was self-explanatory because I had chosen to play as a hot female necromancer (I was happily naïve to the sexual element of female computerised characters, several years off my first playthrough of The Witcher) so a party member typing ‘you’re really a girl? let me help you’ was a strange moment. I was not at all flattered and when they sent me some shiny new armour I just laughed. I grinded these gifts like I grinded for ore.

Furthermore, when finding a party of five experienced enough to make a legendary dungeon worth your time was so infuriatingly hard, having the golden ticket of being ‘really a girl’ was great. So many men on Guild Wars 2 seemed to really love a saviour complex but I got ascended gear out of it, so their desperation really was my win!

A party member typing ‘you’re really a girl? let me help you’ was a strange moment

Yes, I did go through phase when I began to question my life choices; were these hours on the PC really the best use of my time given that it was GCSE year? Absolutely yes! Gaming can be educational… don’t roll your eyes, it really can and in terms of educational value I must praise Ubisoft’s Assassins’ Creed franchise. I would like to thank Unity for my French Revolution A-Level, even if it does have more bugs than a bushtucker trial.

For all my fellow kinaesthetic learners, Assassins’ Creed allows you to learn by doing. It gives you first-hand access into a multitude of different historical periods and, with the exception of the third instalment (whose protagonist would give dishwater a run for its money in dullness) you find yourselves living vicariously through some insanely fun characters. Plus, the gameplay is characteristically simple which I think is always a plus.

Being an English student, and absolutely crazy for anything Vikings, I simply adored their newest game Valhalla. I was stoked to dive into the very period I had just studied in Michaelmas. I was also impressed by how extraordinarily well-researched it was. Another bonus was the addition of drinking games which I heard Ubisoft came up with after blowing their research budget on a huge Viking themed party in Norway for purposes of ‘testing the market’ (hmmm?!?!). I also find it very refreshing that the franchises’ biggest sellers have female leads, and that Kassandra (from their Ancient Greek dalliance, Odyssey) was ranked second on a Watch Mojo on the best Assassin’s Creed leads…obviously behind Ezio!

People are quick to prioritise gameplay over story which is completely justified. Clunky gameplay is a huge bugbear of mine. I have (somewhat embarrassingly) thrown my mouse on the floor after spending a solid hour looting a Hanse fort in the Witcher 3, on Death March I might add, only to succumb to fall damage when descending some stairs.

However, when I think of exactly why I came to love gaming, I almost exclusively think of the stories. I remember the women I saw in games that were like me. I was a little brunette climber, of course I was going to idolise Lara Croft! Jane McGonigal once said ‘reality is broken. Game designers can fix it’ and she couldn’t have put it better. Yes, for many people gaming is just an escape but, for me, gaming proved (and still proves for that matter) that being a girl is actually a pretty cool thing to be.