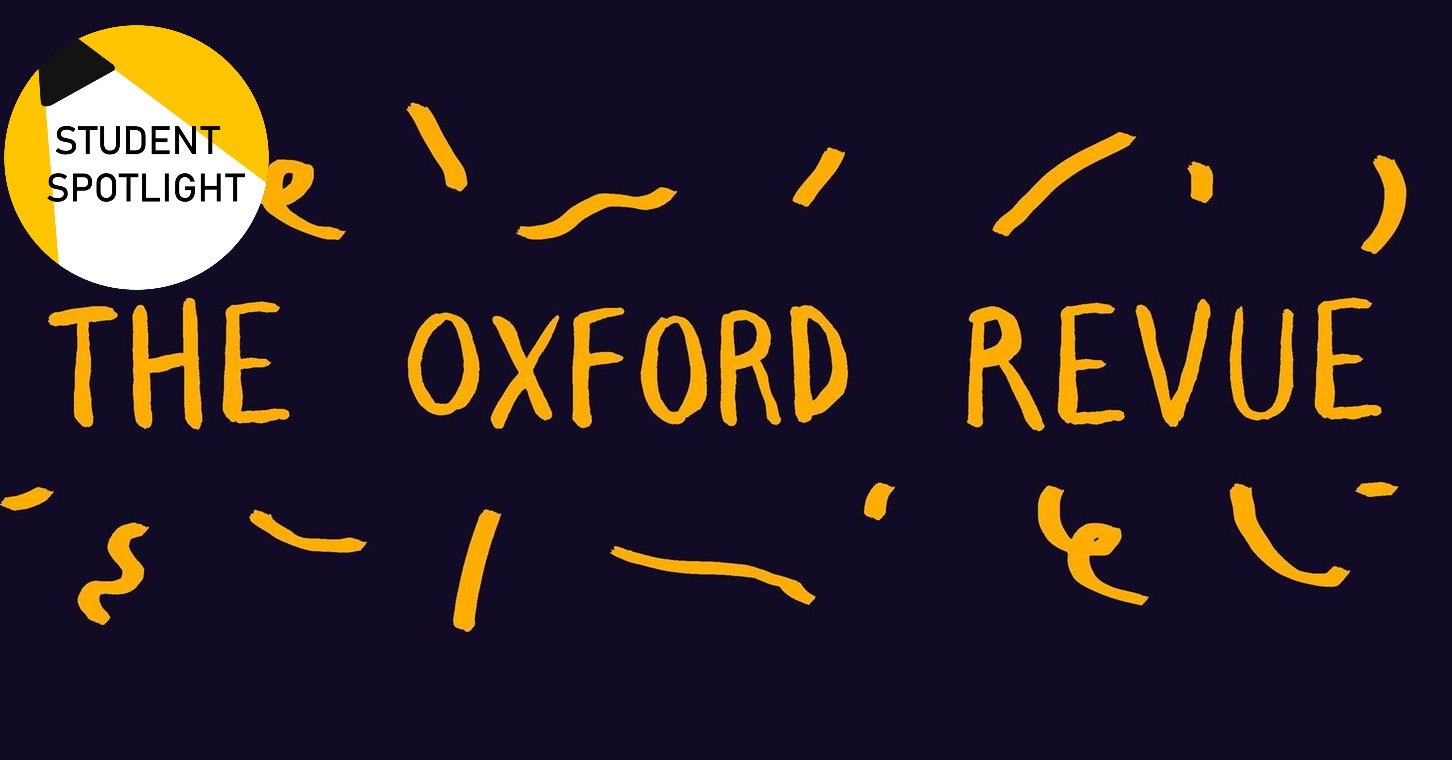 Image description: the text The Oxford Revue with amber lines against a dark blue background and the Student Spotlight logo

We spoke to the Oxford Revue, the University’s long running and well established comedy group about the projects its members are working on, its esteemed alumni and the struggles of performing virtual stand up comedy. The group’s president, Angus Moore, kindly provided us with the following insight.

We are the Oxford Revue, and we are the university’s comedy club. In an environment such as Oxford where there is such a wealth of creativity, I think that comedy acts as a wonderful outlet – it is well-suited to the academic mind, and offers a low-threshold entry into both writing and performing! Within such hectic 8-week terms, I remember comedy gigs in my first year being a fantastic relief: there’s nothing quite like the release of laughter to escape the blues of an essay due in 2 hours.

Why/how did it begin?

The club began in the 1950s, when a group of students came together in order to take a comedy show up to the Edinburgh Fringe. The society then became more organised and unified, and has performed every year at the Fringe since! With the likes of Michael Palin, Rowan Atkinson and Al Murray all taking part in the Revue, it’s a society which has consistently produced excellent performers.

How would a normal week during term look for a student involved?

It varies throughout the term: in a sense, there’s no ‘normal week’. We usually host a couple of stand-up gigs every term, in combination with a sketch show at the Burton Taylor. In preparing for the sketch show, a good deal of time is spent sitting down with the writers and coming up with sketches – much of the time is spent on coming up with ideas which will never, ever make it into the show. But it’s fun. Then, like any play, time is taken to rehearse and perform – with similar levels of procrastination.

The great thing about the Revue is that it is self-driven: each of our members take part as much as they wish, and all of the content is written by us. What we put in, we get out.

Comedy has, obviously, been fairly hard-hit by the pandemic. Because student comedy is almost entirely reliant on live audiences, we have had to strip back our normal schedule, not helped by well the cancellation of the Fringe last summer. We’ve moved our content online: we release sketches every Monday on our Facebook and Instagram pages, and are currently rolling out content from our newest members! We managed to do a live stand-up gig in Keble at the end of last term with a socially distanced audience and a live-stream – although the laughs had a long way to travel from the sparsely organised audience, it went well!

What is the most rewarding part of being involved with the Revue?

I think taking part in student comedy is a genuinely novel and eye-opening experience. Almost no-one has done it prior to coming to university, and so trying it for the first time is a real plunge into the deep end. At Oxford, there are always audiences wanting to come and watch, and so the threshold for entry is fairly low – I am still almost embarrassed to admit to people that I do comedy, because it sounds so grand. Also, it makes people think you’re really funny, which puts an unnerving pressure on conversations.

Doing comedy is both terrifying and exhilarating: the thrill of getting laughs at your own script from an audience of real people is unparalleled. It’s a thrill and a skill that I think very few other societies or hobbies can offer. And although ‘bombing a set’ (getting no laughs) can be pretty humiliating, it’s a great story.

Much of our activity is – naturally (yawn) – largely contingent on the development and progress of Coronavirus. We will continue to release weekly content for the foreseeable future, and our ideal plan would be to do an in-person sketch show at the end of Trinity Term, before heading up to the Edinburgh Fringe. We have written an hour-long sketch show, so we will get it out there – no matter how!

We ran workshops in 3rd and 6th week for students – we will look to do some more next term! Likewise, students are very welcome to send in scripts or recordings to [email protected], and if we like it, we will release it! We would normally be doing auditioned stand-up gigs, and we plan to continue with these in Trinity, although this – as per – depends on the Covid situation.