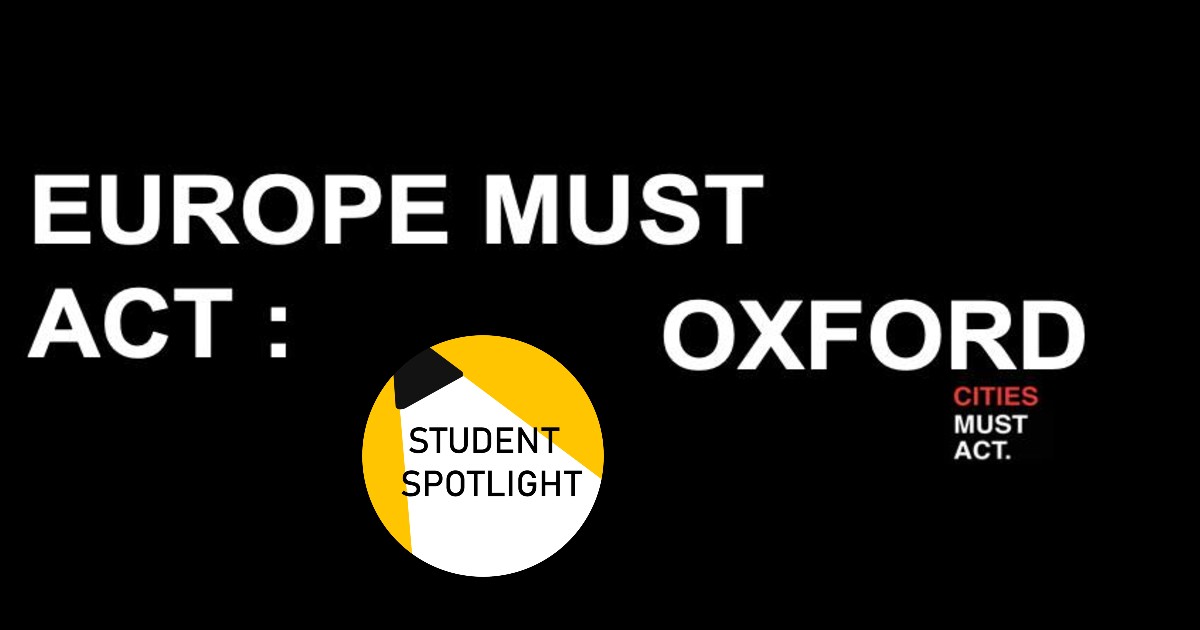 Bethan Roberts spoke to Lily Sheldon, Kate Dorkins, and the Oxford Must Act Committee about their work mobilising and campaigning for refugee’s rights in Europe during the COVID-19 Pandemic.

Our group is called Oxford Must Act and is a new grassroots movement. It is attached to the wider campaign called Europe Must Act (EMA); EMA has the aim of decongesting the Aegean island refugee camps which are overpopulated, largely due to the hotspot policies that UK is implicated in. EMA is essentially a non-violent and non-political lobbyist group which appeals to local municipalities to enact change, there are over 50 chapters. Oxford Must Act is part of the Cities Must Act Campaign. These are the key goals as cited on the website:

The campaign works with other charities such as Choose love and Safe Passage which both work on relocating refugees.

The campaign is responsible for the Aegean Islands report which revealed the inhumane conditions that so many asylum seekers and refugees are living in, we can’t sit back and accept this, we demand change!

Why/how did it begin?

Europe Must Act started approximately a year ago with activists in the Aegean Islands calling for local governments to take action. Turkey backed out of the EU-Turkey deal which resulted in an opportunity to demand a more humane policy. There was perceived complacency from different cities within Europe in regards to the refugee crisis and so Europe Must Act was calling on citizens to show that there is hope that citizens care. It coincided with the start of the COVID-19 pandemic which exacerbated existing issues and worsened the quality of life: not wanting to spread the virus could be used as an excuse to turn away asylum seekers, schools were closed, and less attention was paid to the refugee crisis.

However, the fact that Europe Must Act started during the pandemic did result in a large number of people getting involved with the campaign. People had more time freed up to read about the situation, to talk to others who want governments across Europe to take action, and to set up their very own local chapters.

The movement is pan-European and horizontally run – meaning there is no hierarchy and each chapter is city-specific so is run their own way. The different chapters are however connected through Slack and have been having meetings every two weeks for a year now.

Oxford Must Act, specifically, was run by students last year but as they were all finalists, we are trying to start it up again!

What are your meetings like? How would a normal week during term look for a student involved?

We have bi-weekly meetings with Oxford Must Act and with the whole of Europe Must Act. However, the Europe wide meetings are not compulsory but are optional depending on your schedule.

The meetings are extremely relaxed and will always start with a chat about how we are all doing before we delve into the juicy stuff.

Each person in the committee has their own role: secretary, lobbying specific MPs, education in the Oxford area, running the social media, and more! Each person sets themselves specific goals which the group can help shape, but it is up to them to ultimately achieve them. We then give feedback at the meetings – so what students do really does depend on their week-by-week and role-by-role.

The group was formed during the pandemic, so it feels as though Zoom is the most natural way to operate! Mostly, we have been having meetings and working on recruitment. It has been a great chance to get to know people from all different years within Oxford and although we haven’t physically met each other, we’ve created strong bonds through our bi-weekly meetings and common goals.

What is the most rewarding part of being involved in your group?

Often as a university student at Oxford, I feel as though student culture is so individualised and based on one’s self-interest, academic or social success. This group has instead allowed us to work together to achieve more than that, through lobbying, in order to create a more humane government policy. We also are engaging with Oxford, not just as a university town, but as a city with a specific political infrastructure.

In addition, although we have left the European Union, Oxford and the UK have- surprisingly enough- not floated away. Due to the UKs policy, we are very much implicated in the struggle of these refugees and asylum seekers. Europe Must Act keeps all the chapters across the continent connected.

This is a grassroots group, so it’s rewarding in the idea that it really is whatever we want it to be. No structure, no goals, no establishment. Everyone has a role within the group and those roles are all equally important.

Currently, we are working to get the MPs to sign the Early Day Motion of relocation of asylum seekers and refugees from Aegean Islands. France, Germany and Norway are taking in more refugees and we demand the UK to do the same.

Different members are currently setting up meetings with various councillors in order to discuss policy and with principals of our colleges to discuss our next steps.

We additionally have an upcoming letter-writing campaign day on the 15th of March! Over Zoom, we will write emails and letters to various MPs within Oxford to get them to sign the EDM.

The best way for students to get involved is to like our pages on Facebook, private message myself, Lily Sheldon, or Kate Dorkins (the head of Europe Must Act) and we can get you added to all the groups.

Come along to the letter-writing session on the 15th of March and get a political taster of what the movement is all about!

Let us know if you want to be a college representative, our aim is to have one in each college. You can contribute what it is that you are able to bring to the table: lobbying, social media, education resources or even just enthusiasm.

Above all else, just come along (virtually for now) as we are always looking to get more people on board: we’d love for you to help us to shape the cause that’s most definitely worth fighting for.