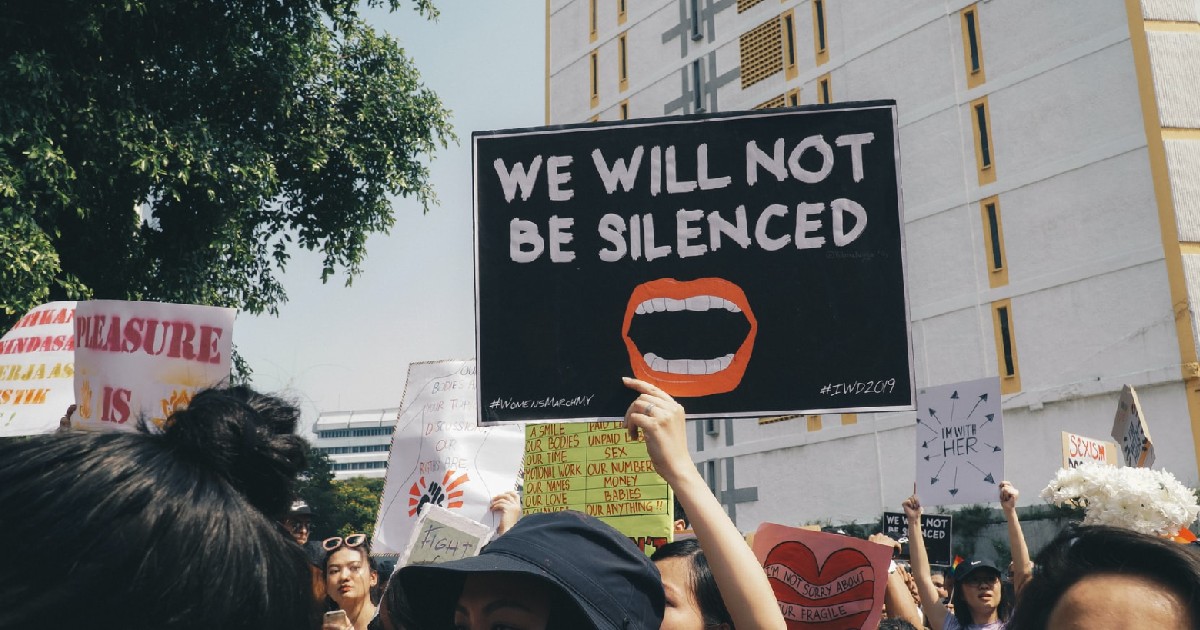 Precarity of Protest: the Met’s treatment of women

Image Description: women at a protest holding up a banner that reads “We Will Not be Silenced”.

Sarah Everard was murdered when walking back from her friend’s house via Clapham Common 11 days ago. The Met have confirmed that the man they have now arrested was a serving police officer. He had been reported to the police for indecent exposure twice before.

It shows how very little the authorities care for our safety and how deadly their negligence is.

Furthermore, the brutalisation of women, as darkness fell, by the police at a protest mourning the death of a woman killed by an off-duty officer at night, illustrates precisely how disconnected the institution is.

The violent response to the vigil proves once more that the police do not exist to protect the most vulnerable.

In the wake of the action of the Met there have been numerous calls for the resignation of Cressida Dick. However, whilst it is undoubtedly important to hold her and the force accountable for their gross misconduct, it would be naïve to believe that her removal alone, or a one-off investigation would resolve any of the fundamental factors that led to such a disproportionate and inappropriate response. Parallels can easily be drawn with the police’s brutal response to the Black Lives Matter protests of last summer.

The troubled relationship between the police and protest predates Dick. In the late 90s and early 2000s dozens of undercover officers engaged in long-term and sexual relationships in order to infiltrate peaceful environmental and women’s rights organisations. This included  a member of ‘Reclaim the Streets’, the organisation which originally planned the vigil on Clapham Common. An institution that was designed to uphold the property rights of a white male upper class is inherently threatened by protest that attempts to disrupt the maintenance of this status quo.

All of this comes at the same time as Priti Patel plans to expand the powers of the police to crack down on protests. The Police, Crime, Sentencing and Courts Bill plans to permit the imprisonment of protesters for up to 10 years, and allow prosecution on the basis that protest acts had the risk of causing ‘serious annoyance’ – the precise purpose of protest. Given the countless cases of explicit and sinister brutality towards protesters and activists that pervade the history of the police force, such an expansion of powers is frightening for the future of protest.

In response to the police’s action at the vigil, feminist groups including the anti-austerity organisation Sisters Uncut have organised a protest outside New Scotland Yard. Such groups demand that we reimagine what protection and safety looks like, calling for community based and more specialised responses to violence against women. Given the persistent threat that the police pose to marginalised members of society such fundamental change is long overdue. As the daily experience faced by black and minority ethnic individuals, transwomen and sex workers show – it is a privilege to believe that the police will protect you.

I was going to attend the vigil on Clapham Common but couldn’t because – ironically- none of my friends could make it and so I would have had to walk back alone. Instead I shone torches and lamps from my front door at 9:30pm. Nobody else on my road did. I left a candle in a small stand to burn outside all night.

A recent statistic stated that 92% of female students at Oxford have experience groping on a night out – making Oxford the 4th worst University in the country for this form of assault. Undoubtedly this University is an environment dominated by (white) men. Countless articles have been written about the disproportionate number of men on courses like PPE, the way in which rugby culture dominates college social spaces, and the pervasiveness of ‘sharking’ that many freshers face. But this is a problem that extends far above the action of men in the student body.

Year after year, witnessing the extent to which the powers that be within Oxford colleges do not care about the protection of women, and the lengths that they will go to to excuse (and so protect) men, I feel as if I have gone cold to the reality of the pain and anger that these experiences provoke.

As Women’s Officer I had to emotionally distance myself or else I would have been too distressed by the reality that faced me. Women are threatened with libel for speaking up about assault. Assault is excused because he was ‘stressed’ about exams and had ‘promising academic potential’. The reality placed a man’s reputation or education over a women or gender-nonconforming person’s safety and life.

Last night I was reminded of the fear I have experienced nonstop for as long as I can remember. The fear I felt every single day after school when I came back to an empty house. The fear I feel every time I walk back at night, or walk up a too quiet road in the day, or walk past a van on the street.

On the doorstep as I was sitting there, I let myself feel these emotions for a second for myself and the countless times I have felt the precarity of my existence. And also for my friends and family, whose experiences are far worse than my own, who remind me that I am one of the ‘lucky ones’. For the one woman every three days in the UK killed by a man. And for Sarah.