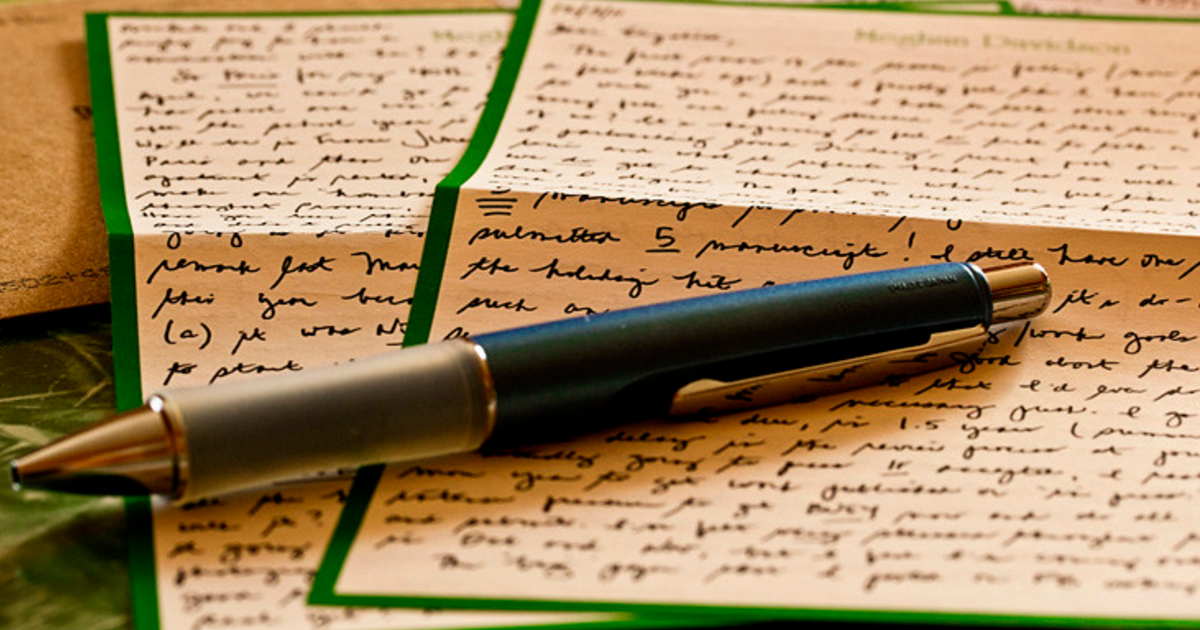 “A letter always seemed to me like immortality because it is the mind alone without corporeal friend.” – Emily Dickinson

Last March when we were put into our first lockdown, I sent my friends literary quotes each day online, – often, they would send some back and it felt like a way of connecting to them in what was (and still is) an unsettling time. However, a few weeks in, I dreaded sending yet another selfie with the peace sign to let my friends know that I had again had Weetabix; asking “how are things?” to be told that all continued in the Groundhog-esque way and that The Yellow Wallpaper was no longer fiction, but an all too pressing reality.

There were things I considered trying in order to battle the boredom, the restlessness, the sense that life had paused: these included new languages with the scary Duolingo owl (too scary so it never happened), the couch to 5k challenge, or learning the art of crocheting and giving in to the introverted granny figure which floats along beside me. However, I chose not any of these things, but instead to pick up my pen and begin to connect to my friends through letter-writing. Over the past year, it is something that has given me joy, connection and hope in a year in which it was needed. Letters connected me to my friends, my family, in a way that endless social media messages never would have been able to.

On Tuesdays at my primary school, we would have a letter-writing session – this memory floated to my mind as I considered why I had been so compelled to write letters – and why they had made me happy. I think when I was 8, I gained my pen licence. There is something so wonderful about putting ink to paper, especially when writing to someone you care about: it is a way of capturing your thoughts and feelings forever on epistle, it is permanent, real, tangible. Yes, texts will float about in technological spheres I will never understand, but there is something that connects on a much more fundamentally human level when we have an epistolary exchange.

One of my friends from college said to me once “all letters are love letters” which I think is a beautiful sentiment – perhaps, not entirely true. Nonetheless, the connection we get when we realise people have sat and taken the time to write and share either deep emotions or nothings about the walks they have been on, mean there is an element of sentiment to any letter. One of my friends said to me that “it was typical of an English student” and many said that they were fully loving the “Jane Austen vibes.” This only shows that in a technological age we have moved away from the letter – the only letters I have received for a long while have been bank statements, and I can firmly say that they don’t hold any sense of humanity. The letters from my lockdown, then, are not bound ontologically in love necessarily, as my lovely friend A told me, but they do hold true human sentiment.

There is something so wonderful about putting ink to paper, especially when writing to someone you care about: it is a way of capturing your thoughts and feelings forever on epistle, it is permanent, real, tangible.

I like the physicality of the letter – the tangibility – the fact that there are stains, smudges, human fallibility scrawled across the page so that there is imperfection: an imperfection that mirrors life. I am naturally introverted, but in letters, I come alive, verbose, they are where I can express myself: I would capture what’s important to me, the literature that had moved me, the seasons changing as I saw them and was unable to share them with my friends. They would share the same with me – passages from books, quotes that moved them, how they felt. What’s more, is we shared our feelings in a way that would perhaps never have been done without these letters: it opened up new measures of vulnerability, closeness, platonic intimacy that I think only this medium was able to bring. I wrote letters to distant family friends, people older than me, with so much experience of the world: they told me stories of their life, they asked what inspired me. Letter-writing became more than just something you would do with a pen-pal as a way of slightly improving your 12-year-old French. For me, it became connection, storytelling, a sharing of life.

My letter writing took on a fundamentally deeper meaning when I suggested to my birth sister that perhaps we should get to know each other through letter writing. A primary love I have of sending letters is it re-teaches us the lost art of patience in a world that is full of consumerism, a need for most things to be readily available, online connection at our fingertips. I liked that this way there could be a pause, a breath – an allowance to sit with our feelings. It takes the pressure off communication – it allows us to pause, as lockdown too paused life. Letters, for me, were a good welcome pause. I would walk to my postbox listening to music, revelling in the small details of life, and would release a breath as I sent that letter for the first time. This was scary, but from this has grown a relationship I now look forward to growing further – we moved to emails and soon will meet in person for the first time. From an exchange of letters filled with curiosity will come a story of connection to a blood relative: it happened for me in the gentlest and most wonderful way.

I have kept up a letter exchange with a few of my friends over the entire course of the pandemic. With one of my flatmates, Max, they have been something I look forward to with a lot of joy. We don’t talk a lot online, though he is one of my best friends. In fact, I told him I loved him and appreciated him for the first time in a letter for his 20th birthday: I wrote out the poem Desiderata for him in that letter too – it holds within it the words “be cheerful, strive to be happy.” It is a sentiment I live by, and one that encapsulates our friendship. This is a man who has listened to me over pints, Belle and Sebastian soundtracks, has seen me at my most sad, my most vulnerable, has told me he will collect me when I was scared in Oxford having been harassed, has offered to pick me up from hospital, has danced with me and laughed with me, but most importantly has been my friend.

From an exchange of letters filled with curiosity will come a story of connection to a blood relative: it happened for me in the gentlest and most wonderful way.

In many years time, I will look back at our countless letters, which act fundamentally as a time capsule to an unforgettable year. All letters are time capsules to another time, another version of every single one of us who was writing in a precise moment in time — they act as a literary tardis, a way of connecting to our past selves – they are something tangible that remind us of true, deep connections we had with people. I am grateful that my hobby was letter writing – it is something that I will keep for life.

Every time I would go into the post office for more stamps (one of my biggest expenditures over lockdown) and would wish the grumpy postman a good day. I would laugh at his non-reply: it was something I looked forward to. I look forward to the day he will smile at me – another win for human connection. For now, the pile of letters must be over one hundred – they are a time capsule of memories, emotions, connections: a collection of humanity that I am grateful I have.