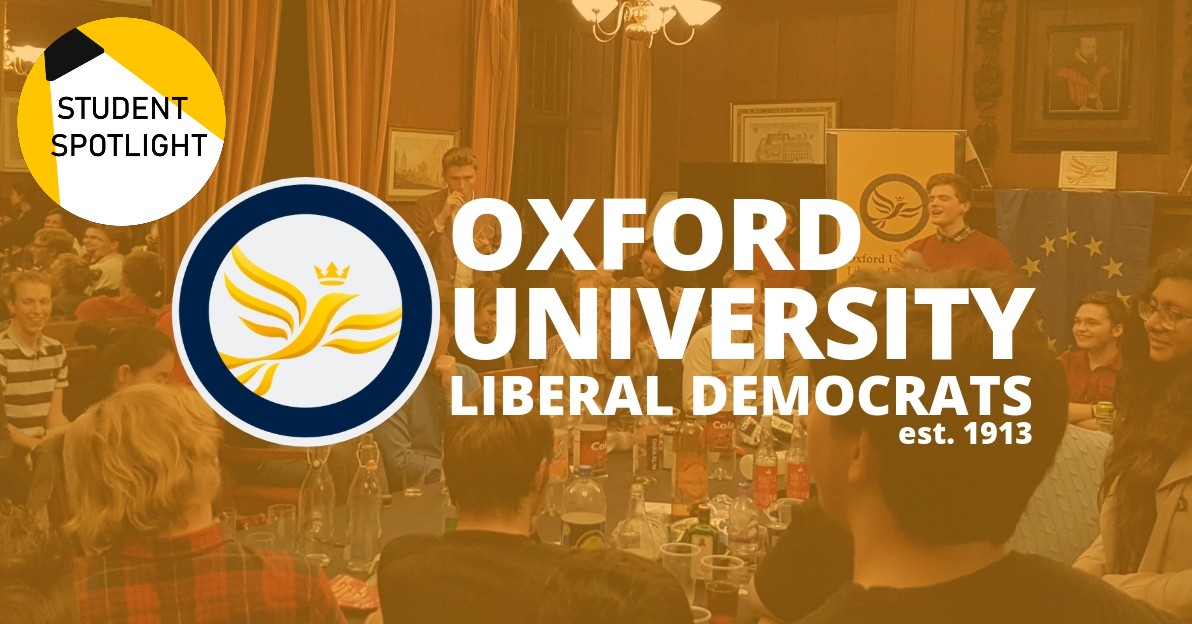 Image description: the text ‘Oxford University Liberal Democrats est 1913’ against a background photo of students socialising with an orange tinted overlay and the Student Spotlight logo

Continuing where we left off with OUCA, we spoke to OULD. Founded in 1913 (albeit as the Oxford University Liberal Club), it frequently boasts that it is the oldest student political society at the university, and indeed any English university. Intriguingly, among its list of past members one can find the names Harold Wilson and Michael Foot, who both went on the lead the Labour Party.

The club’s current President, Natasha Voase, has provided the following responses to our questions.

Student politics sometimes gets a bad rep, but is this entirely fair?

OULD is a place where like-minded people can meet, have a drink and then stagger (in pre-Covid times, obviously) to Park End or the King’s Arms. We place a lot of emphasis on ensuring that as many different people attend our events as possible and our events are attended by members of other student political societies.

We’re a very sociable bunch and we’re known for attending as many political debate nights as possible. In normal times, we also have many crew dates, including our famous “Coalition” crew date with OUCA and our termly crew date (or “swap” as our misguided friends in Cambridge call it) with the Lib Dems of Cambridge (CULA). We also do charity work, such as our Charity Spirited Discussions where we donate £1 of every entry fee to a chosen charity. So yes, it’s true that come 7th week, our events are suspiciously full of Union members but hacks are people too and this just gives us an opportunity to meet even more interesting people. In short, student politics at OULD is a long way from the West Wing-style drama splashed across Oxfess.

What are your meetings like? How would a normal week during term look for a student involved?

When there isn’t a pandemic going on, our weeks are filled with events where we get to see people in the flesh rather than through the medium of Zoom. Our main event has always been Spirited Discussions which takes place every Wednesday. Traditionally, we provide unlimited spirits (and mixers) for £5 and then people go on either to the KA (King’s Arms for the freshers) or to Park End, or both. This is a pretty fun event and involves lively debate and a lot of laughs definitely one to check out when Boris eventually lets us get within two metres of one another.

We also organise as many crew dates as possible with a variety of different societies, such as OUCA, C&S and CULA. Once a term, we meet our friends at CULA in either Oxford or Cambridge for a Spirited Discussions and a crew date which always gets rather messy.

We also organise campaigning every weekend and non-drinking events such as Cold Takes (this involves ice cream) and speaker events. This term, we welcomed a lot of very exciting speakers to the society and we hope to continue this in the future.

How has your club responded to the pandemic? What sort of events have you been holding in the past few terms?

We’re really proud of how we’ve responded to the challenge of the pandemic. It’s true that for a society which revolves around in-person social events, the past year has been tough. However, we’ve risen to the challenge and we’ve been holding regular speaker events with other societies, including CULA and OULC (Oxford University Labour Club). In some ways, the pandemic has even been an opportunity as it has allowed us to invite speakers from all over the world. We even managed to do Spirited Discussions with CULA which made everyone nostalgic for our crew dates. However, zoom fatigue is beginning to hit so we’re now eagerly looking forward to being able to hold some in-person events as soon as it’s possible to do so.

How are you getting ready for the upcoming local elections in Oxford?

With doorstep canvassing and leaflet delivery no longer an option, we’ve had to move our campaigning activities online too. Our virtual campaigning sessions now consist of phoning up voters from the comfort of our rooms. To simulate the atmosphere of in-person campaigning, this ‘virtual phone banking’ happens as part of a big group zoom call with everyone on mute. We have even taken part in a national mara-phone event, in which Lib Dems from across the country all called voters on the same day. We can’t wait to get back to campaigning on the streets of Oxford as soon as possible. The local elections this year are some of the biggest in decades, and, as usual, a few of our members are even running as candidates themselves!

There’ll be a new President next term so as ever, a couple of things might change. We’re planning more speaker events for Trinity, starting with Stephen Farry MP, the trailblazing Deputy Leader of the Alliance Party of Northern Ireland, and Munira Wilson MP, Health Spokesperson for the Liberal Democrats. Hopefully, as restrictions are lifted, in-person events (even if outside!) will be able to go ahead.

Our doors are open to everyone regardless of their political affiliation as we love to meet as many people as possible. While our 7th week events are inevitably plagued with hacks, our other events are full of friendly and sociable people. Anyone who wants to get involved should pop into one of our events and say hello as it’s such a good way to meet lots of different, and at times eccentric, people from across the university.

We know that not everyone is interested in a loud drinking event so we organise non-drinking events where people can get to know us in a calmer environment. We hope to see you there!