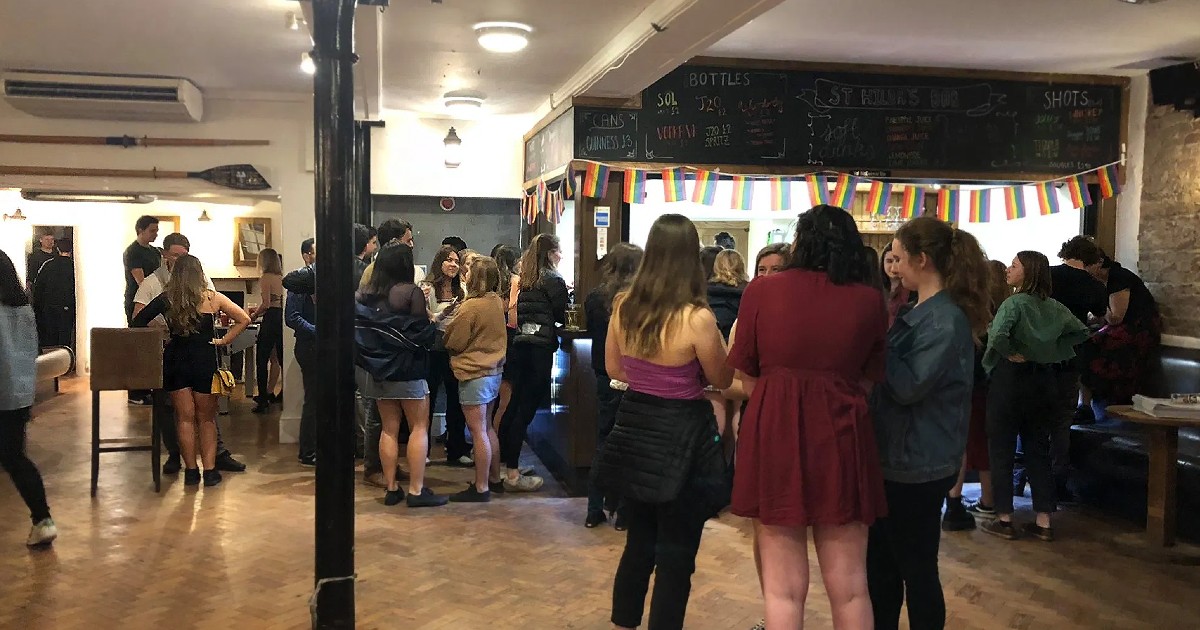 St Hilda’s bar to be taken over by college

Image Description: A group of students stood in the St Hilda’s College bar.

The administration of the St Hilda’s bar, one of the last completely student-run bars in Oxford, has been removed from the JCR by the College. This comes despite student attempts to have the bar remain in the control of the JCR..

The Hilda’s JCR President announced the changes in a post on the JCR’s Facebook page. A petition was started, gaining over 200 signatures, alongside the support of a former JCR President and the bar’s namesake, Val McDermid.

Hilda’s students were updated once more by the JCR President about the outcome of the petition and meeting with the college. Despite significant concern from St Hilda’s students, the Governing Body resolved to accept the proposals.

“Thanks to everyone who spoke at the JCR meeting on Sunday, or has spoken to me since – I raised all of our concerns and objections, as well as the petition and alumnae support, in the Governing Body meeting I had on Wednesday. I raised objections and questions about the proposal for college management of the bar for 90 minutes – unfortunately in that time not a single member of the Governing Body spoke against the proposal. With 35+ to one I really tried my best, but Governing Body has resolved to approve the transition of management.”

The JCR President continued to state that the reason he believed that the college is pursuing these changes is due to issues of legal liability. He reiterated how disappointed he was, and emphasised that he had tried his best to prevent this from happening.

“During the Governing Body discussion it became apparent that College’s argument boils down to one of legal liability. If something bad were to happen in the bar, they feel that they need to be able to prove that they had all the correct procedures in place in order to have mitigated the risk. I made multiple attempts to assure them that this could be done under student management. However, with the support of multiple former Deans, the argument was made that this had been an issue that has been ongoing for years, with attempts to resolve it within student management made previously, most recently with the bar supervisor role. Given that they do not feel the issues have been addressed, they see this as their only remaining option.”

“I know this is incredibly disappointing, I am as disappointed as everyone else – and I really have tried my best to prevent this from happening.”

In a statement to The Oxford Student, the JCR President further highlighted his disappointment at the decision:

“I am incredibly disappointed by the Governing Body’s decision. The JCR has clearly shown its opposition to this move, and provided constructive approaches to resolve College’s concerns whilst retaining student management. As the only JCR space in college, student concerns should have been prioritised in this decision but they weren’t. It’s disheartening that college have chosen to end the student management which was one of St Hilda’s most unique and successful features, as well as being the pride and heart of the JCR community”

“Everyone’s worried that the bar will become inaccessible and expensive. As the only space for undergraduates in College, we feel that the buttery and the bar should be protected, and we are concerned about the impact of College on student spaces.”

St Hilda’s College responded to these concerns by emphasising that this change had been adopted with input from the JCR and MCR The JCR will be consulted in the matter early in Trinity term. The statement also categorically denies that the changes will affect the general use of the JCR space.

“The College’s Governing Body considered this matter through its committees, on which the JCR and MCR are represented. Early next term the College will be engaging with the student body to take the matter forward. The proposal relates only to the management of the bar and operation of bar service during opening hours. It does not affect general use of the JCR space.”