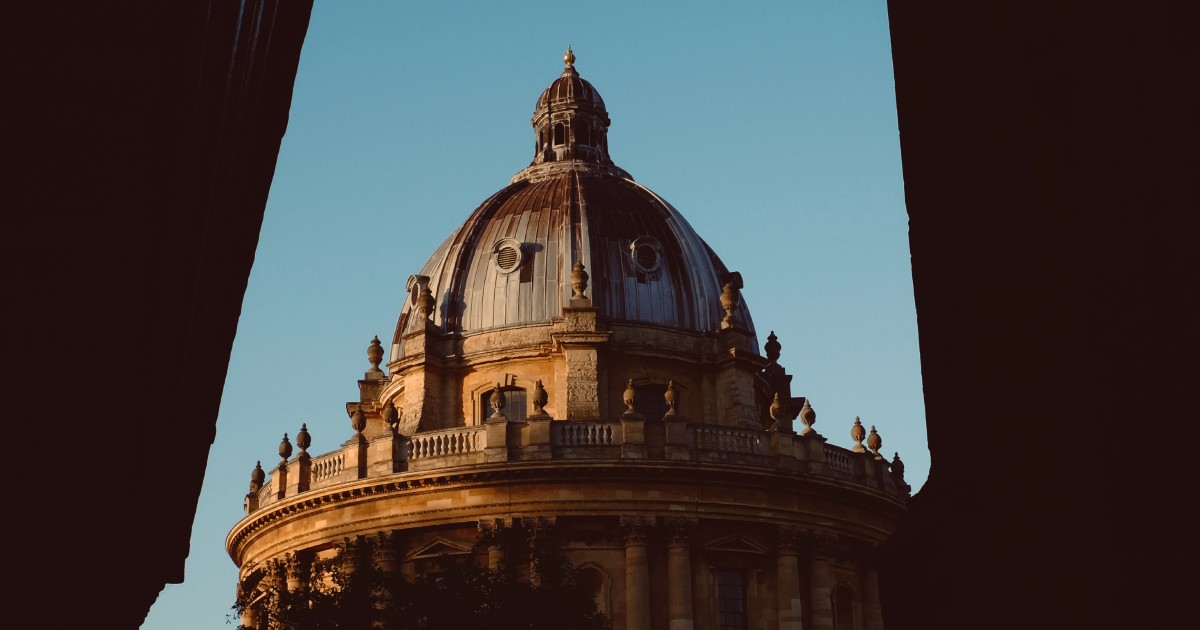 Image Description: A picture of the roof of the Radcliffe Camera, through an archway.

Oxford India Society, Oxford University Hindu Society and Oxford South Asian Society have released a joint statement on recent coverage in the media regarding the resignation of former Student Union President-Elect Rashmi Samant to address a “misleading narrative”, including claims from Samant that calls for her resignation were driven by “an element of racial profiling”.

The joint statement said that the societies wished “to clarify that this is not why Ms Samant had to resign, and by that, we mean that neither her nationality nor her religion are what prompted the calls for her resignation. Her narrative of this being a racist attack against her undermines real experiences of racism of students at the University.”

The statement was prompted by recent coverage of events in Indian media, and notes that this coverage “incorrectly portrayed that Ms Samant’s resignation was prompted by an irresponsible social media post from a staff member (not a professor) and by racist comments.”

It continues: “This is far from the truth, not least because the said social media post came only after Ms. Rashmi’s resignation. We are concerned that this diverts the focus away from Ms Samant’s evasion of accountability, and the harm that her actions have caused.”

Samant originally resigned following condemnation from JCRs and SU campaigns after a series of controversial social media posts were brought to light, described as racist, antisemitic, and transphobic by Oxford’s Campaign for Racial Awareness and Equality and Oxford LGBTQ+ Society.

On a picture taken at the Berlin Holocaust Memorial in 2017, her Instagram caption said the “The memorial *CASTS* a *HOLLOW* dream of the past atrocities and deeds” while another of a picture of herself in Malaysia read “Ching Chang”. Samant also attracted criticism for a campaign post caption that separated “women, transwomen and men”.

Samant has in recent weeks spoken to a number of media outlets, including one article in The Times, where she claimed she was subjected to a racist “cyber lynching” through a number of anonymous WhatsApp messages and Twitter posts. She told The Times that she has made a formal complaint to the University after Dr Abhijit Sarkar, a postdoctoral researcher at New College, reposted a photo of Samant’s parents in which he claimed that they were celebrating the destruction of a mosque in India.

Samant told The Print that she intends to file a defamation suit against the staff member who made these allegations.

The situation has escalated in recent weeks after India’s foreign minister, Subrahmanyam Jaishankar, told MPs he would talk to Britain about Rashmi Samant. He further suggested that her treatment was due to “racism” and vowed his country would “never ever turn our eyes away from” it. Ashwini Vaishnaw, from the Bharatiya Janata Party (BJP), also claimed her treatment was the result of a “continuation of attitudes and prejudices from the colonial areas”. Free speech campaigner Calvin Robinson described the situation as “cancel culture” and “a misguided approach at social justice.”

Samant had previously apologised for her social media posts before ultimately resigning:

“Regrettably, I alienated people within our wonderful student community to the extent that they deem me unfit to be the leader they rightfully deserve. I sincerely apologise to every student who has been hurt by my actions or words and seek a chance to gain your trust in me again.”

“The Oxford India Society, Oxford Hindu Society and Oxford South Asian Society believe that there is a need to address the misleading narrative on a recent series of events at the University of Oxford surrounding the former Student Union President-Elect, Ms Rashmi Samant.”

“We, the aforementioned societies, unequivocally condemn all forms of discrimination based on, but not limited to, race, religion, national origin, caste, sex, sexual orientation and gender identity. We recognize that a culture of institutional racism is prevalent in the University, and that racism is a lived reality for several members of the University, including brown students. It is with utmost caution, therefore, that we wish to clarify that this is not why Ms Samant had to resign, and by that, we mean that neither her nationality nor her religion are what prompted the calls for her resignation. Her narrative of this being a racist attack against her undermines real experiences of racism of students at the University.“

“There is no doubt whatsoever that Ms Samant’s now-deleted posts on social media are racially insensitive towards the East-Asian and Jewish communities, and are transphobic. Therefore, although the student body voted for Ms Samant because of the pledges on her manifesto, ultimately, her insensitive remarks about other minority groups and refusal to accept responsibility for her actions are what prompted calls for her resignation.“

“We reiterate that these calls did not have anything to do with the fact that she is Indian or Hindu or a woman. In fact, the entirety of the Student Union Sabbatical Officer team elected this year is constituted by BAME (Black, Asian and Minority Ethnic) women, including another Indian woman born and raised as Hindu.”

“Ms Samant’s failure to take responsibility for her actions, and her attempts at justifying her offensive remarks are reprehensible. We, therefore, express our solidarity with both the Oxford University Student Union Campaign for Racial Awareness and Equality, and LGBTQ+ Campaigns who previously released statements calling for Ms Samant’s resignation from her position of President-Elect.”

“Recent coverage of these events in Indian media has incorrectly portrayed that Ms Samant’s resignation was prompted by an irresponsible social media post from a staff member (not a professor) and by racist comments. This is far from the truth, not least because the said social media post came only after Ms. Rashmi’s resignation. We are concerned that this diverts the focus away from Ms Samant’s evasion of accountability, and the harm that her actions have caused. It dismisses the Oxford student community’s legitimate demand for accountability from an elected student representative. This demand was expressed through democratic means, including no-confidence motions at four constituent colleges. Any mischaracterisation of such democratic demands as ‘cancel culture’ is deplorable. We are deeply concerned that sections of the Indian media are trying to pretend that this issue is one of racism against Hindus or Indians. As societies representing the Hindu, Indian and South Asian populations on campus, we are displeased by this false narrative, and urge the media to stop pedaling disinformation in the garb of news.”

“We regret that this series of events has caused various members of the Oxford student community to be subject to online bullying. Often, the same groups hurt by Ms Samant have been asked to defend themselves and had their lived experiences denied. This is abhorrent. We are acutely aware that Ms Samant’s post-resignation comments and interviews are feeding into the dangerous Hindutva narrative in India that is fundamentally exclusionary and discriminatory. That Ms Samant is unable or unwilling to see this, despite having run on a platform of ‘inclusion’ and ‘decolonization’ in Oxford, is unfortunate.”

“We further strongly disapprove of the actions of Dr Abhijit Sarkar, Postdoctoral History Researcher at New College. Dr Sarkar’s social media posts about Ms Samant’s parents and their religious beliefs had no place in a conversation about Ms Samant’s reprehensible actions. She cannot be viewed as her parents – any criticism of her actions should refer to those actions alone, and certainly not her family background. It is imperative that Dr Sarkar take responsibility for his words and apologise to Ms Samant.”

“We urge Ms Samant to refrain from further commenting on this situation, and instead, educate herself on the harm she has caused, as she promised she would in her initial letter to the Oxford student community. We understand that Ms Samant has filed an official complaint against Dr Sarkar. Therefore, we demand that the University give a fair consideration to her complaint and decide on appropriate disciplinary consequences as per University rules and regulations.”

“We finally request the media and concerned citizens to understand the series of events in context, and listen to the student community’s position. Oxford students come from diverse backgrounds and identities, and we believe that our identities must be exercised and protected in a manner that is inclusive of other identities and embraces the intersectional struggle against all kinds of oppression. As student societies that primarily cater to minority groups in Oxford, we will continue to work to make Oxford a safe and tolerant space for all.”

Samant previously told the Indian Express that there was a “conscious attempt made to unearth posts made by me…It was only after I won that they were brought up. I believe my posts were not malicious or racist.”

The Times also reported that she had pleaded ignorant regarding accusations of transphobia, writing that she comes from a country where transgender individuals (Hijras) are officially recognised as a third gender. In an interview with NEWS9 live, Samant stated “the whole mob got to me, they got to my psychology… making me believe that I’ve done something terribly wrong, whereas in fact I hadn’t”.

Oxford University previously stated: “We have strong policies in place to protect our students and staff against all forms of harassment.”