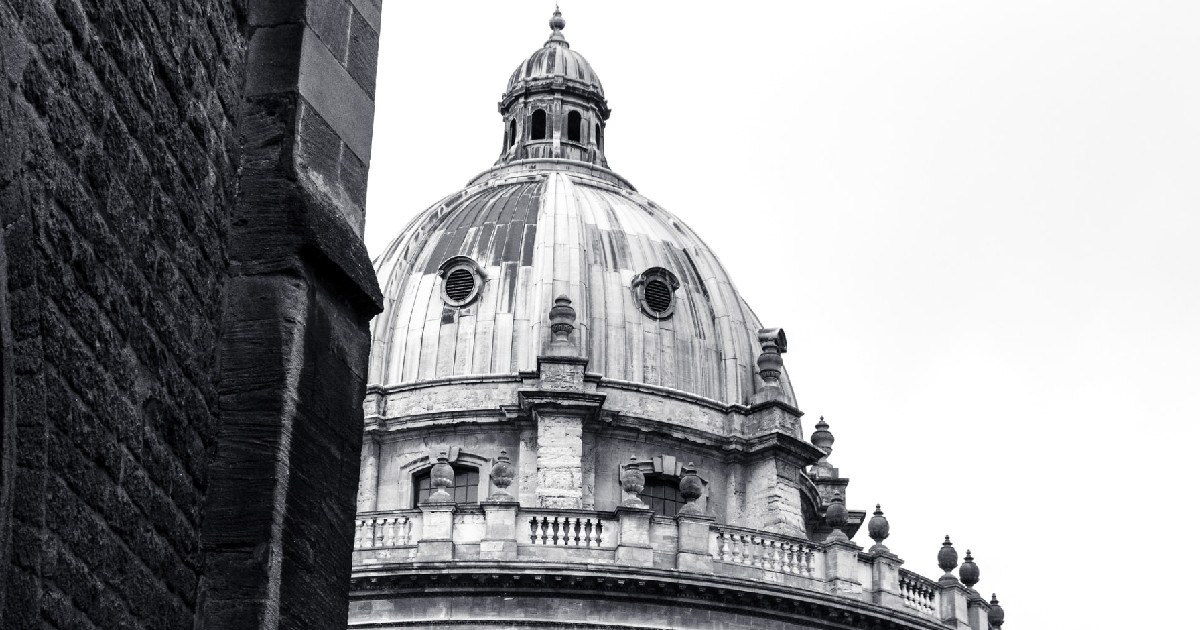 Image Description: A black and white picture of the roof of the Radcliffe Camera.

Student campaigners including the Oxford SU, Oxford Climate Society, Oxford Climate Justice Campaign and Oxford Nature Conservation Society have joined forces to welcome the University of Oxford’s new ambitious Environmental Sustainability Strategy. The strategy became University policy after being approved in a meeting of the University Council on the 15th March.

The strategy contains ten priority areas which are research, curriculum, carbon emissions from energy consumption on the University estate, biodiversity, sustainable food, sustainable resource use, travel, alongside investments and learning from the pandemic. It also includes four enablers to support the strategy, which are governance, reporting, funding, and offsetting.

The University will establish a new Oxford Sustainability Fund which will make £200 million available for sustainability initiatives over the next fifteen years.

“There are innumerable warnings of the impending dangers of climate change and biodiversity loss. We simply must heed them. Doing so will necessarily entail real changes to how we live and work. Just as we have had to adapt to demonstrate our resilience during the pandemic, adapting to the consequences of climate change will require significant, occasionally unwelcome, changes in our daily lives. These inconveniences will be a price well worth paying in order to ensure that we bequeath a healthy planet to future generations.”

Since its inception, the new Environmental Sustainability Strategy has had student voices and input at its heart, enabled by strong partnerships between Oxford SU, the University of Oxford, and a range of student leaders.

Following the Oxford University Climate Assembly in 2019, consultation with academics and students has continued and their influence has shaped the strategy. The latest consultation on the strategy in November 2020 had over 1200 responses, an increase of over 30% on the previous consultation after a student-led six concerns campaign. As a result, the plan is far more ambitious than originally planned and is widely backed by students following a vote in the Student Council in March 2021.

The Oxford SU, Oxford Climate Society, Oxford Climate Justice Campaign, and Oxford Nature Conservation Society said they are very pleased that the Sustainability Plan has been adjusted as a result of student pressure to put greater emphasis on climate education as well as research and education around environmental justice. The University has agreed to acknowledge its historical impact. The group now would like Oxford to carry out research into how – both currently and historically – it has participated in colonial processes of exploitation and extraction.

Furthermore, the group understands that the strategy only covers the central University and that it is important that colleges implement their own strategies to achieve net zero carbon emissions and net biodiversity gain by 2035 at the very latest. The Oxford SU and other student leaders remain committed to working with the collegiate University to tackle the environmental crises.

Many colleges have already committed to strong action and are developing plans. Colleges are being encouraged to participate through the Decarbonise Oxford Campaign being run by the Oxford Climate Society and Oxford SU’s student representation. The group would also like to reiterate the demand that all colleges divest their endowments from fossil fuel companies as soon as possible.

They remain concerned that the University Sustainability Strategy allows Oxford to continue carrying out research for fossil fuel companies. The new strategy also does not prevent Oxford University from continuing to accept donations from fossil fuels companies, which concerned students argue both facilitates greenwashing and celebrates these companies. By neglecting these crucial issues the Sustainability Plan still allows Oxford to continue exacerbating the climate crisis and perpetuating climate injustices.

However, the establishment of an ambitious University Environmental Sustainability Strategy represents a significant win for students. This follows a series of wins by students campaigning for action on the environmental crises, including the University divestment motion in April 2020 and the development of the Oxford Climate Action plan.

“The University’s new net-zero strategy is an enormous milestone in Oxford’s response to the climate and biodiversity emergency, and a tribute to the hard work and collaboration of a number of staff, academics, and students. Now that the University has committed to more ambitious action, it is crucial the strategy is followed as a priority, and that individual Oxford colleges follow suit in setting net-zero targets.”

“At Oxford SU we’re pleased to have worked on the strategy every step of the way, ensuring that student voices are represented and at the heart of the vision. Oxford SU’s Student Council, representative body of all students at the University of Oxford, has voted unanimously to approve and support the Environmental Sustainability Strategy. We believe that the Strategy is an important step forward for the University to take action on the environmental crisis.”

“Student campaigners at Oxford play a leading role in tackling the environmental crisis at all levels and the dedication of students has been a crucial part of getting the strategy over the line. Of course, there’s always more to do and we at Oxford SU, in partnership with students and the University are committed to implementing the strategy.”

“We are pleased with the Strategy’s ambitious targets, and grateful for the changes made in response to student input. We hope, however, that there is more to come. By maintaining financial and institutional ties with the fossil fuel industry, our University perpetuates the unjust global power that these companies wield: power that manifests in exploitation of people as well as of the Earth. As it stands, these ties threaten to undermine the values of the Sustainability Strategy; and consequently, we call for their severance as soon as feasibly possible.”

“The inclusion and commitment to biodiversity net gain by 2035 is a great step forward in acknowledging the biodiversity crisis on the same level as other environmental threats. It’s great to see Oxford leading the way with biodiversity considerations being incorporated into all key priorities and the University’s world leading research being put into practice such as the Mitigation and Conservation Hierarchy. Going forward it is important that progress sticks to the outlined schedule and that momentum is sustained to effectively tackle this issue.”