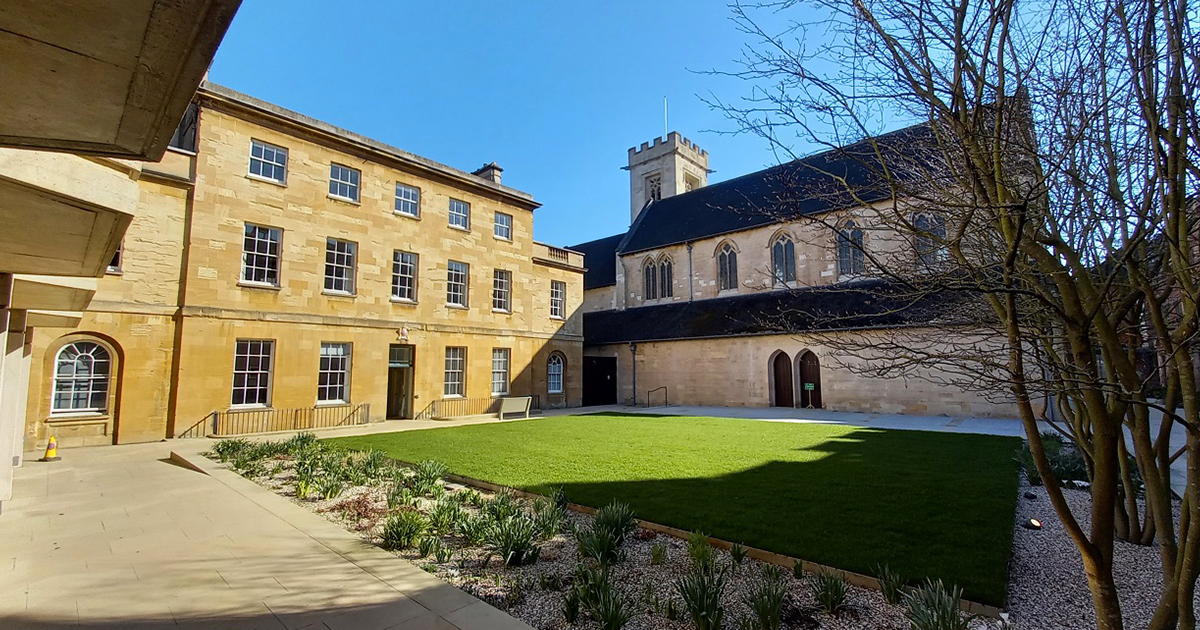 Image Description: View of the main quad including the Porter’s Lodge and Chapel of St Peter’s College

The College will introduce a new ‘pre-pay plan’ for Undergraduate freshers with a staggered roll out to other years from 2022-23 onwards. Currently, St Peter’s operates a pay-as-you-go system. Under the new plans, any unused credit would be wiped from students accounts at the end of each term and not refunded.

Students have criticised the “sneaky” implementation of the compulsory charge for next year’s Freshers who applied under different circumstances, as well as the College’s failure to adequately consult with the student body. The College has said they consulted with student representatives before Governing Body approval.

The College has argued that “given the place Hall occupies in College life, and the quality and price of the food served there, the number of students who eat in Hall is surprisingly small…”

The College also wrote, in a document sent to MCR students, that there were three areas of concern if the dining hall is not used frequently by students. They are concerned for the community life of college “when so few eat lunch or dine in” despite arguing that they have good optionality, decent prices and good reviews from those who do come. They are also concerned that individual students are not eating well, writing that “the large number of takeaway boxes from external providers might support this concern.” Finally, they argued that there was an institutional concern for college catering if students choose not to eat in.

Under the plan, students can spend the pre-payment on any combination of meals, including formal halls and guests, and if they use up this amount they can then add additional money onto their uPay account, the College’s preferred payment system.

St Peter’s did not consult the wider student body beyond the JCR President and Vice-President for feedback. One alum of the College, speaking to the Oxford Student, said that the College’s handling of the situation was “sneaky.”

“To implement such a big change that will affect the incoming Freshers cohort who applied and were accepted under the pretence of this not being the case is sneaky… When I worked in access for the College I used the fact there were no compulsory hall charges as a selling point.”

The student suggested factors such as early mealtimes, meals clashing with other commitments, a lack of choice, expensive food, and issues with lunch being a full cooked dinner rather than sandwiches or cold foods as potential reasons voiced in their friend group. The College wrote that informal surveys and comment boxes on their food provision were very positive.

The alum further added that the move was “elitist and disappointing.”

“I’ve previously defended the affordability of this college based on the fact that I did not have an obligation to pay for Hall food, unlike other colleges. This means that I could budget on my own, keep my spending within my means, and eat what I wanted, when.”

According to JCR members, other students have in the past expressed concerns that side options are charged on the basis of how many different things you have, rather than portion size. This means that students asking for small amounts of multiple sides will have to pay more (typically 80p per side) than a student requesting a large amount of a single side option (as the price never exceeds 80p regardless).

The College recently introduced a £1.95 meal option, but this does not include side dishes, and a menu from Michaelmas term seen by the OxStu, shows the £1.95 special item as a single slice of pizza. Standard meals are £2.95, and premium options are £3.95, not including the cost of sides.

A current second-year at Peter’s said that the plans that the College has “will disproportionally affect those from lower incomes.”

“Many students do not have the budget to spend that much on food, and if they are not present in Hall for any reason, they would still need to pay. The nature of it being compulsory, then, is incredibly unfair; especially as students have not been consulted on this change first. On average, most students do not spend nearly as much money on food as the College suggests they would, and it just shows how out of touch they are with the current student body.”

According to the Office for National Statistics, a two-person household in the under 30 age brackets spends an average of £50.40 per week on food and non-alcoholic drinks. The £288 compulsory charge sets an expectation that students will spend £36 a week (over an 8-week term) on Hall food, which equates to ~8 meals per week in statistics provided by the College.

“In a usual year, our Hall is a central part of St Peter’s life serving a range of quality food 3 times a day on weekdays, and 2 a day at weekends.  Our food is well-reviewed.”

“The pre-pay paper was shared, and discussed, with representatives from both JCR and MCR Committees in late November. At a meeting of Governing Body, representatives from both JCR and MCR Committees spoke in favour of the scheme as a good way of promoting community in ways that still left flexibility with the individual student about how to spend down on the prepay amounts. The decision paper as it relates to JCR participation was shared with JCR representatives in mid-January. They responded positively to it at that point. Details for MCR participation were finalised at the end of Hilary Term and the decision paper was shared with MCR representatives in March. College is happy to answer further questions about the scheme from our student body as these arise.”

“The prepay system responds to a desire to support the community life of College and the Hall’s central place in that.  With the prepay system, St Peter’s will continue to offer affordable food below cost, while encouraging higher attendance rates for Hall. This works in line with how similar schemes work in other colleges.”

“The starting expectation is that the scheme will apply to all. However, students whose dietary requirements on health or religious grounds cannot be met by Hall can apply for an exemption from the scheme. Students experiencing financial hardship are encouraged to apply, in complete confidence, for hardship funds at any stage in the year.”