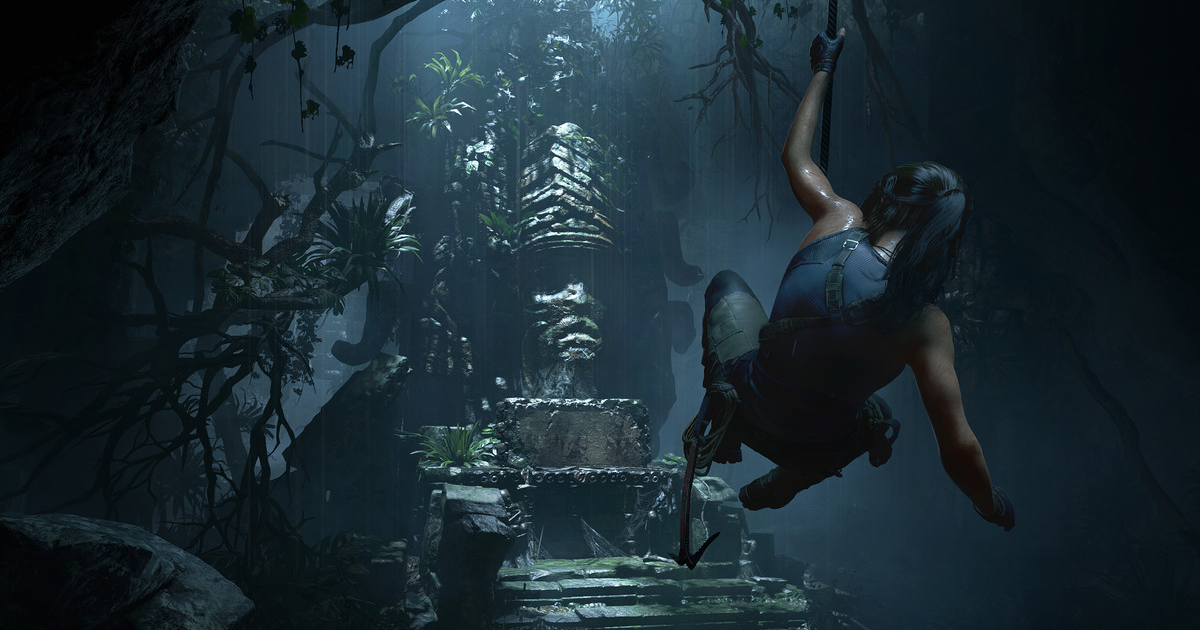 Image Description: Lara Croft swinging on a rope in some ruins.

She’s gaming’s bestselling heroine, holds 5 World Records, and with over 1300 covers she is on more magazines than any supermodel. For someone who began as a sexed-up Indiana Jones fantasy, Lara Croft has come a long way.

When I was young, I idolised the spunky adventurer, which led to far too many debates about whether someone so often presented as a sex symbol is really the best role model for a young girl. Yes, the Tomb Raider franchise will forever be defined by a heightened sexuality. Its heroine began with a body so incredibly disproportionate that it was actually plain ridiculous. When Angelina Jolie is saying she is ‘too athletic’ to play a woman whose entire career is climbing, you know you have a few body dysmorphia issues.

The worst part of it all is that the developers of the game refuse to acknowledge their complicity. Toby Gard, Tomb Raider’s own Dr Frankenstein, once said that her eyepopping chest size was due to a ‘irresolvable mistake’ in the game’s coding. 20 years later he backtracked, dismissing it all as a joke but also offering no alternative explanation for her bizarre proportions. Personally, I preferred what was said all those years ago, even if it was pretty implausible… at least then we could pretend that the blatant misogyny was accidental.

But – perhaps for the billionth time – there is more to this tomb raider than impractically tight booty shorts. The Lara Croft we see in the games – an important distinction from the edgy playboy bunny we often see at comic-con – is never once seen as being defined by the opinions of men. With franchises such as The Witcher or Dragon Age ramming the myth that a ‘stubborn’ (I mean, I would prefer ‘strong’, but patriarchy!) woman is only palatable when a calming male influence is shoved in her face at every available opportunity, Lara Croft is a refreshing change.

That’s not to say she lives in some female-only conclave. She has male friends, importantly not lovers because she’s too busy stopping alien authoritarian apocalypses to engage in something as ordinary as marriage, but they are certainly more comic relief than commando.

Another important figure is her father, the successful archaeologist Richard Croft (although ironically the only thing he seems to succeed in is abandoning his pre-teen daughter). Lara’s quest to prove herself to her father is perhaps the most endearing aspect of her character; it’s a gnawing we have all probably felt at some point in our lives. In The Rise of the Tomb Raider, the second game in a rebooted trilogy which focuses more on Lara’s backstory, I fully choked at ‘we made it Dad’. For a character who is infamous in her invulnerability, this moment of quiet commiseration for a life she wished she had lived was magical.

Designers have had more goes at rebooting Lara Croft than Assassins Creed have at finding a character as iconic as Ezio. I will always have a soft spot for the early-noughties incarnation voiced by Keeley Hawes, perhaps because Tomb Raider: Anniversary is the first computer game I ever played, or due to the fact that she discovers the lost city of Atlantis and at that time I had a huge Atlantis themed Lego kit. To be fair, she was pretty iconic. Anyone who can come up with the line ‘death by irony is always painful’ after seeing some vigilante thugs get crushed by the very boulder they were trying to climb around cruises to the top of any ranking.

The Lara Croft we see in the games is never once seen as being defined by the opinions of men.

Real praise has to go to the Lara’s most recent renaissance. When Crystal Dynamics released the image of Lara Croft standing bow-in-hand in the cave full of shipwrecks, I thought to myself, Lara cannot become a knock-off Katniss Everdeen, she’s come way too far. (Seriously, look at the 2013 cover and tell me that you don’t think Hunger Games.) A Lara that was more Bear Grylls than badass archaeologist was certainly not an incarnation of tomb raider that I thought could get behind… I couldn’t have been more wrong.

When the game was released, its head of production Darrell Gallagher famously called for us to ‘forget everything you know about tomb raider’; and good god, this game didn’t only rip up the rule book, it tore it into one-hundred pieces and, in true Tomb Raider style, threw it headlong into a bottomless pit. The premise was darker, for a start it was the first time a game in the franchise had been given an 18 rating. We were far from the innocent Indiana Jones’ pastiche we saw in the mid-nineties. More importantly, Lara was made to be held accountable for her endless meddling. Gone are the days when she could just pootle around in tombs and indulge her curiosity without consequences.

One of the most powerful scenes comes in the final instalment, The Shadow of the Tomb Raider (minor spoilers for the game’s opening scene ahead), where we see Lara’s stealing of a Mayan artifact cause a cataclysmic seismic blast to sink an entire town in Mexico. Lara survives, (because… plot armour?!), but thousands die. Actions have consequences, and Lara is haunted by these consequences for the remainder of the game; it is this acceptance of reality that makes these new games more real and so much more modern. Of course don’t think that this new adventurer isn’t still utterly badass… come on, it’s Lara Croft! In the opening game we see her transform from doughy-eyed schoolgirl to unstoppable assassin in the space of thirty seconds, and all it takes is a Colt Mark IV (if you know, you know).

To return to those who questioned my admiration for Miss Croft; female characters have always been sexualised, and perhaps they always will – well, certainly as long as the video game development profession exists at a 70/30 split. If people want to shoebox Lara Croft into a category that only sees her as every teenage boy’s fantasy, then that’s their prerogative. For the more mature among us, who don’t lose it at lycra – Lara Croft is fierce and formidable… she also just happens to be female.