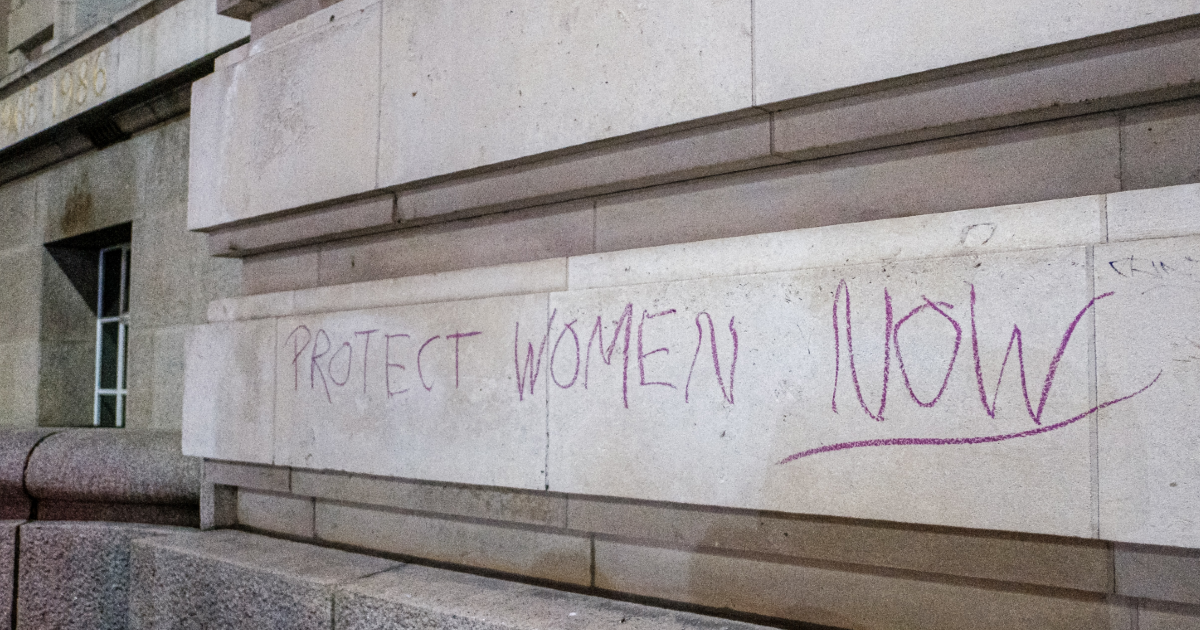 Reclaim the streets, reclaim language: the issue with how we talk about sexual harassment

Image description: white façade with the phrase ‘protect women now’ written on it in purple chalk.

Everything about the recent case of Sarah Everard’s abduction and murder is horrifying. The fact that she was kidnapped from streets that she should have been able to walk on safely, by a man employed by the state to protect those very streets. The violence then used by police against women peacefully participating in a public vigil. The fact that so many women can so easily imagine themselves in her position. The case has also exposed awful biases in the treatment of female victims of male violence by the media and society at large, specifically the language and linguistic constructions that make sexual harassment women’s problem and absolve male responsibility.

We must acknowledge the reality: in the vast majority of cases, sexual harassment and violence are experienced by women, but perpetrated by men.

In response to the outpouring of posts on social media about Sarah Everard’s case, specifically a Guardian headline stating that “[a]lmost all young women in the UK have been sexually harassed”, Nadia Whittome, the MP for Nottingham East, tweeted the following: “This should read ‘Men have sexually harassed almost all young women’. We must shift the passive way gendered violence is reported.”

This sentiment was shared by the psychotherapist and author Philippa Perry, who tweeted: “We can all change the way we talk about it.” She attached a quote from a TED talk given by the activist and educator Jackson Katz: “We talk about how many women were raped last year, not about how many men raped women. We talk about how many girls in a school district were harassed last year, not about how many boys harassed girls. […] So you can see how the use of this passive voice has a political effect. It shifts the focus off men and boys and onto girls and women. Even the term violence against women is problematic. It’s a passive construction. There’s no active agent in the sentence. It’s a bad thing that happens to women. It’s a bad thing that happens to women, but when you look at that term violence against women, nobody is doing it to them. It just happens. Men aren’t even a part of it!”

Our language is far from neutral; it contains and perpetuates our own societal biases, and has real implications on how we view the world. Thus, while grammatical constructions may seem a trivial aspect of responding to gendered violence, such verbal ordering dictates how we consider, discuss, and address the problem. Through the omission of agency, passive constructions frame sexual harassment as just ‘something that happens’: it becomes an inevitable occurrence, a sad fact of life, something which women are powerless to stop. It also makes sexual harassment and assault a women’s issue, for which women are expected to find the solution and take responsibility.

The media’s use of the passive voice is notable for an industry that famously favours the more succinct, vivid, and powerful active voice; but the underlying attitude towards gendered violence is far from being limited to the media, instead, it permeates our society as a whole. Women who experience sexual harassment or assault at men’s hands are condemned for their outfits, lifestyle, alcohol consumption, and past sexual behaviour, even accused of ‘asking for it’. It is this mentality that results in female rape victims’ underwear being used as evidence in courtrooms, as it was in Cork in 2018 – a horrible echo of the focus on the Victoria’s Secret labels of the victim’s underwear in the infamous 1991 rape trial of William Kennedy Smith, a nephew of President John F. Kennedy. Meanwhile, underage schoolgirls are dress-coded for wearing allegedly ‘revealing’ clothing that simply shows their shoulders or knees, for fear of ‘distracting’ male students and teachers; this misses the point that male teachers should surely not be employed if they can’t be trusted to see the shoulders of an underage girl. In our language and attitudes, courts, classrooms, and public places, women are held responsible for the actions of men, and expected to change their behaviour accordingly.

Women are held responsible for the actions of men, and expected to change their behaviour accordingly.

Many comments on the Sarah Everard case have included some version of the idea that ‘she did all the right things’: wearing bright clothing, calling her boyfriend, as well as letting her friends and family know what route she was taking home. However well-meaning and sympathetic, this too is extremely problematic: the very notion of ‘right things’ fundamentally implies the existence of ‘wrong things’, again placing female victims of gendered violence under scrutiny. Through the menacing moral lens of ‘right’ and ‘wrong’, our perception of morality and justice becomes dictated not by the actions of the male perpetrator, but those of the female victim. What if a victim hadn’t done ‘all the right things’? Should that affect our ability to mourn her, to condemn her murderer?

Women are constantly forced to check their behaviour, limit their own liberty, as a preventative measure against gendered violence, but this addresses the symptoms, not the cause. The cause? Perpetrators. This is what our language needs to start acknowledging to allow for real change.

In order to reclaim the streets, we must also reclaim language itself.