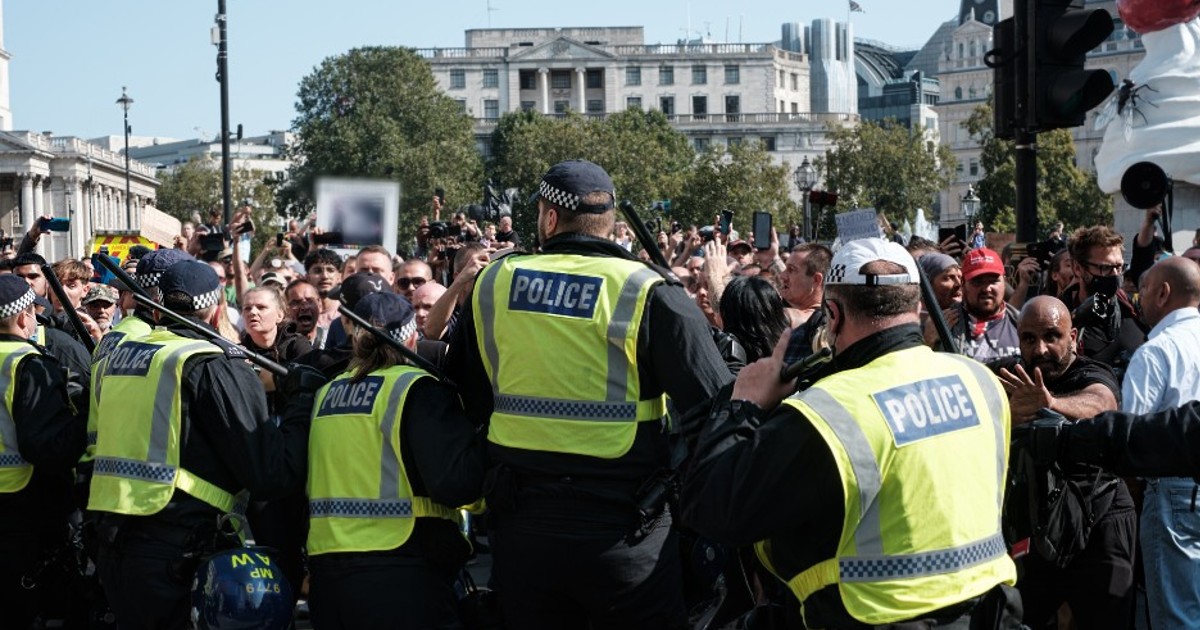 Image Description: A police cordon from behind with officers wearing high-vis jackets reading “POLICE” at a protest.

The statement describes the bill as an “unprecedented attack on the right to protest” and criticises what it describes as a disgraceful crackdown on civil liberties. The two political societies stand strongly against the Bill, and have resolved to do whatever they can to oppose the legislation.

“Oxford University Labour Club and Oxford University Liberal Democrats stand together to voice our joint opposition to the Government’s disgraceful crackdown on our civil liberties. The Police, Crime, Sentencing and Courts Bill represents an unprecedented assault on the right to protest.”

“Both OULC and OULD have already released independent statements of opposition to this bill. We are issuing this joint statement now to make clear that democrats across the political spectrum must unite against this reactionary authoritarianism. Whatever differences there are between us, we are all threatened by this attack on our freedoms.”

“In particular, we recognise and emphasise the severe effect this bill will have on minorities and any marginalised group. Protest gives a vital voice to the unrepresented. Now, the Government is seeking to take that voice away.”

“OULC and OULD resolve to do whatever we can to oppose this legislation, both together and apart.”

In a statement OULC encouraged MPs to vote against the bill in its third and final reading, as well as emphasising that they hoped that the joint statement would inspire more students to express their dissent to the Bill.

“The Police, Crime, Sentencing and Courts Bill marks a grave threat to the democratic institutions of the United Kingdom. The right to protest is fundamental to any democracy and must be protected and upheld. The proposed bill seeks to undermine the prerogative of individuals and groups to express their views, marking a disturbing shift away from the liberal democratic values that we hold dear. OULC therefore denounces this bill and urges MPs to vote against it in its final reading. We also encourage students to express their dissent in a firm yet peaceful, legal and Covid-secure manner.”

Asher Weisz, OULD President further commented that he hoped that the cooperation of OULC and OULD would encourage other societies to unite against the bill.

“The Government’s legislation is an insidious attempt to undermine civil liberties. Our statement with OULC today underlines our shared desire to stop this bill. I hope that action against the bill at the University will be as cooperative as possible.”

The bill passed its second reading on the 16th March by 359 votes to 263. It is currently in the committee stage of the legislative process, after which there will be a third reading of the bill in the House of Commons. Typically a committee on a bill will begin a couple of weeks after it passes its second reading, but in some cases this can be delayed. The date for the committee stage for this bill to begin is yet to be announced.

The bill has attracted substantial criticism, and there have been numerous protests against several key provisions. In Bristol, there have been four large-scale protests in previous days, with the last seeing hundreds of people gather in the city centre on the 31st March to protest the bill. Previous protests had become violent, something that campaigners blamed on heightened police presence and Home Secretary Priti Patel described as “unacceptable”.

Speaking during the debate in the House of Commons, Robert Buckland, Minister for Justice, defended the Bill as “another milestone along the road to creating a higher degree of public protection for victims of crime”. However, Labour has criticised the Bill for failing to address specifically the concerns of women, and falling levels of conviction for sexual offences.

The debate on the Bill began only two days after a vigil held for Sarah Everard on Clapham Common became violent, with The Metropolitan Police Federation reporting that 26 officers were assaulted at the vigil, including being punched, kicked, and spat at. Organisers of the vigil have criticised the response of the Metropolitan Police, describing the force as “drunk on power”.

The Labour Party voted against the Bill at the Second reading, and Shadow Secretary for Justice David Lammy spoke vehemently in opposition, highlighting that women are not mentioned once in the Bill. He tweeted on the first day of the debate on the Bill that:

In the 20 schedules, 176 clauses and 296 pages of the Conservatives' Police, Crime, Sentencing and Courts Bill, "women" are not mentioned even once.

This is a missed opportunity to tackle violence against women and girls that has become endemic in the UK.

“In the 20 schedules, 176 clauses and 296 pages of the Conservatives’ Police, Crime, Sentencing and Courts Bill, “women” are not mentioned even once.”

“This is a missed opportunity to tackle violence against women and girls that has become endemic in the UK.”

The date of the third and final reading of the bill is not yet known.