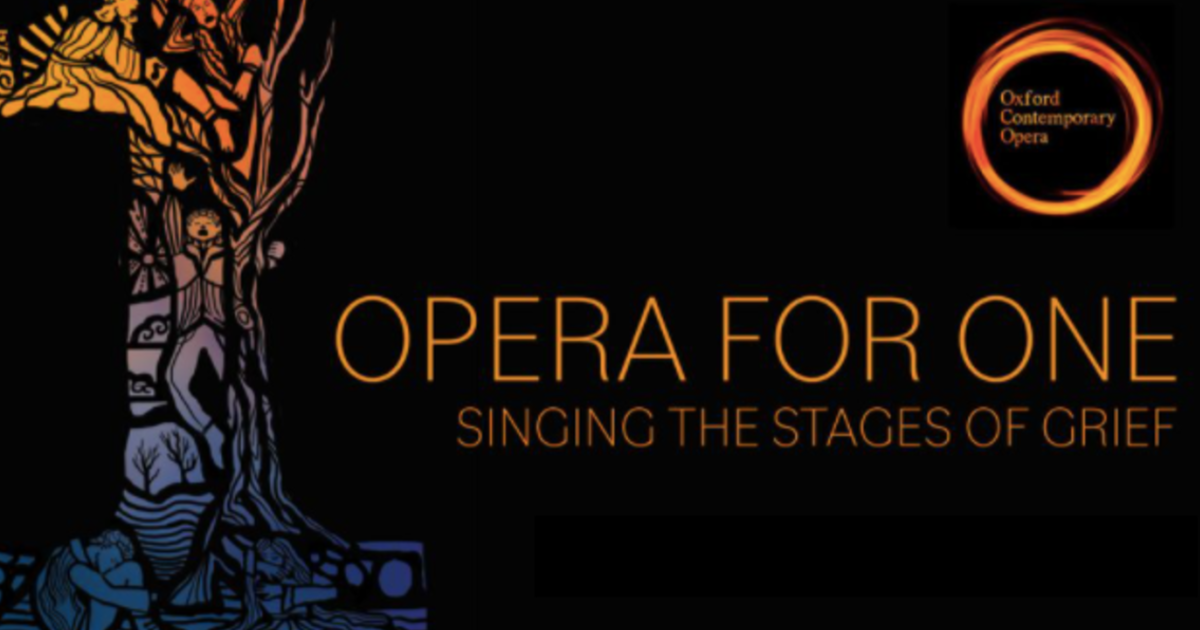 Opera for One: ‘Singing The Stages of Grief’ Review

Image Description: poster used to advertise the production, a tree made out of abstract images of people on a black background

Exploring grief through music, Oxford Contemporary Opera Society has commissioned 5 pieces that move through the stages of grief. Throughout the performances, dissonant chords and large ranges in the melody present challenges for the vocalists but are handled expertly, portraying the various emotions with confidence. You almost forget while watching that the vocals and piano are not being filmed and recorded simultaneously, that the performance as a whole has been pieced together after the fact.

The performances open with the first stage of grief- denial. The feeling of being slightly disconnected from reality is reflected in the disjointed melodies and weird chords that accompany them, always keeping the listener on edge. An interesting moment appears at 2:45, where the singer dips in pitch slightly on a held note. Is this a glimpse of the darker reality, a crack in the singer’s facade? Phrases and runs don’t quite connect and seem to stop prematurely, leaving you with a sense of loss. The music is self conscious in its irregularity, proclaiming ‘this broken verse, this broken verse.’ A jaunting swing section features later in the piece, which culminates in an abrupt and unresolved ending

Is this a glimpse of the darker reality, a crack in the singer’s facade?

Anger follows denial. Natalka Pasicznyk’s rich vibrato is a perfect fit for this section. The piece is mostly atonal, erratic and features cluster chords. The composer treats the pause between each harmonic clash with rhythmic diminution, creating a sense of insistent movement. The listener is poised; on-edge, waiting for anger to hit. Beyond rhythm, sudden changes in volume and pitch extrapolate this effect in the realms of melody. Instability is everywhere in this movement, with shuddering glissandos and an extended atonal harmonic-field acting as a barrier to any kind of harmonic grounding. While this is powerful, I find the most unnerving idea comes from the mismatch of piano and vocal, one being metrically stable while the voice slides across the piano in a disparate metre. It appears musically that we are hearing two separate stories; two clashing voices. The conflict between these is perhaps the most gripping element of the piece, despite its initial subtlety.

Bargaining contrasts the previous pieces, it’s more classical, nostalgic and romantic. Featuring fuller chords and a use of the lower piano register, Lili Herbert’s pure vocals are juxtaposed beautifully with the bottom notes. However, while there is beauty in this piece, it retains the uncertainty and edge that is featured in denial and anger. There are moments of fragility and it’s still possible to feel a build up of despair underlying the music, although here it is painted with a more delicate brush.

Depression moves slowly – chords and the melody are similar in pitch, meaning a murky, claustrophobic atmosphere is created. Balance and Lloyd-Owen utilize the semitone extensively, trapping the listener in a tight harmonic space. Edwin Hughes’ facial expressions and movements paint the idea of musical despair visually; an impressive feat, since the resonance and power of his voice opens a musical space one would consider antithetical to entrapment.

To finish us off, we move to acceptance. It stays more harmonically stable than the other pieces and is perhaps more similar to what we think of as opera. High notes and plenty of vibrato fill out the melody line as the accompaniment bubbles around the vocalist. Arpeggios paint a tranquil surface, interrupted only occasionally by after-shocks of grief, heard in the lower register of the piano. It appears the music has reached an uneasy resolution; one which denies the listener full satisfaction. An imprint of grief will always remain.

It appears the music has reached an uneasy resolution; one which denies the listener full satisfaction.

Despite having different composers, vocalists and different themes, the pieces hang together to pull us through the stages of grief, threads of musicality and the genre of contemporary opera itself keep us engaged. From anger to acceptance, the music tracks a journey that’s simultaneously challenging and rewarding.

Lockdown has presented a range of challenges for classical musicians, logistical and also one of disconnect in such a close knit community, making music together has never been more challenging. However, performances like this show that the making of music always continues. It gives us hope as we open up and social interaction recommences, that things may return to normality once again.