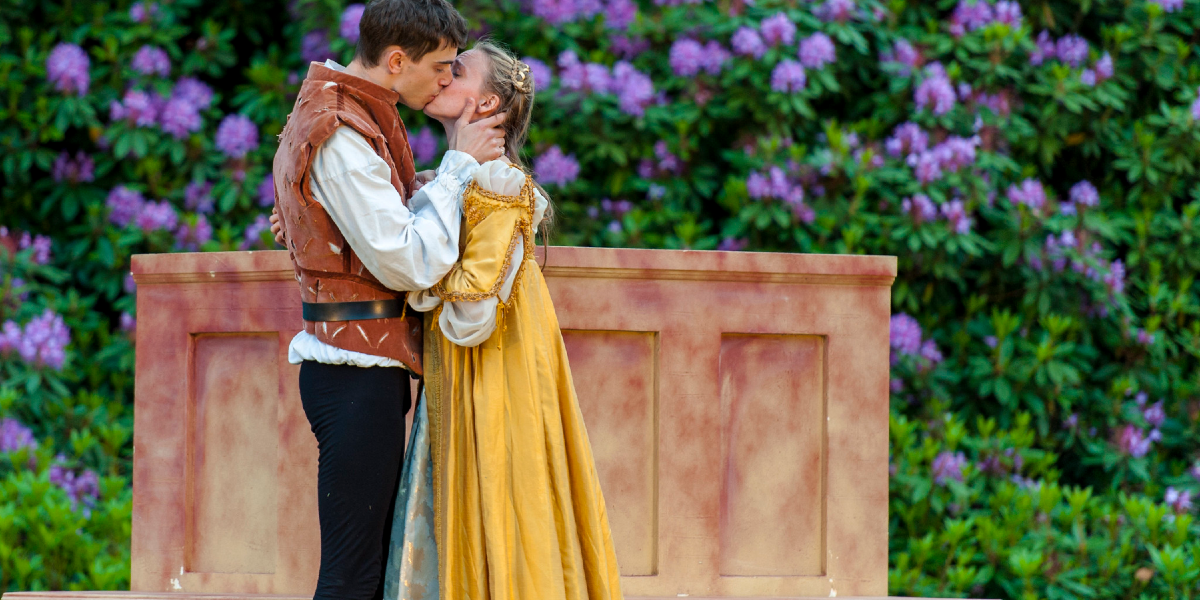 Lockdown’s Romeo and Juliet: a Review

The National Theatre’s new film, Romeo and Juliet, was intended to be a full run theatre production last year. But of course, like most things, it was derailed by the pandemic. With a full (and impressive) cast, a theatre, some set and costume design, and presumably a sudden amount of free time on their hands, the production team decided to transform it into a hybrid of theatre and film, within the empty theatre. Across seventeen days with a complicated and intense COVID-testing regimen, they have made something that is brilliant, not only for having been achieved in a global pandemic, but innovative and compelling in its own right.

It is no mean feat to make a play like Romeo and Juliet feel spontaneous and genuinely captivating. Even without going to the theatre regularly or studying it in year 8 English, it’s unlikely anyone has got through life without gaining some knowledge of Romeo and Juliet’s plot. We all know where it is going, and we all know it won’t end happily. And yet, I found myself holding my breath, hiding my eyes behind my hands, pulling at my hair: all from the comfort of my own home.

There are markedly fewer fish tanks to be stared through than Baz Lurhmann’s 1996 film, probably the most well-known and recent film adaptation, barring Gnomeo and Juliet which, fabulous as it is, bears little resemblance to Shakespeare’s original. Juliet doesn’t have angel wings in this version: she’s more mature, trying to break free of restraints both her mother and her Nurse seem to have constructed around her. The famous balcony scene is perhaps where the idea of the theatre as a character in itself truly took off. The set which would have been used in the theatre run takes on new perspectives through the medium of film. The wrought-iron columns and wooden steps of the ladder Romeo stands on turn in and out of focus as the camera turns around Josh O’Connor and Jessie Buckley doing a frankly stellar job of convincingly falling in love and promising to marry each other within the space of 2 minutes.

It took a moment to see Josh O’Connor (The Crown) as Romeo: I half expected him to be off to go and shout at Lady Diana every time he exited the stage. But once you separate him from Prince Charles, he is a sincere and endearing Romeo. Watching him makes you want to hug him and shake him at the same time. Paired with Buckley’s unusually feisty Juliet, their chemistry is obvious. What shouldn’t be missed about this production, and what the film genre allowed it to do so well, was the sheer sexiness of it. Romeo’s Normal People-style chain, Juliet’s hands tracing her torso as she waited for him, close up shots of hands and lips: it’s this that lifts the play from a re-run of a play we all know too well. It allows you to remember why it’s such a good story. The love and desire rather than just the tragedy and numerous murders.

We all know where it is going, and we all know it won’t end happily. And yet, I found myself holding my breath, hiding my eyes behind my hands, pulling at my hair: all from the comfort of my own home.

The production also introduces a queer element in the form of Benvolio and Mercutio as a couple. Early scenes hint at strong desire between them, but rather than just queer-baiting in order to make the play seem modern and somehow edgy, it develops subtly and genuinely into a kiss which makes the inevitable stabbing even more shocking and upsetting than usual. Romeo and Juliet aren’t the only couple in this film, and that really adds to the overall development of emotion. By the end, I was barely holding back tears.

But the first half is also, perhaps unexpectedly, really quite funny. Benvolio and Mercutio’s drunkenly stumble through lines that make no sense. Peter gives off a strong relatability watching her employers act ridiculously, and Romeo’s longing for Rosalind which immediately disappears on sight of Juliet dancing feels inexplicably modern and soft-boy-esque. Tamsin Greig is, as usual, phenomenal. Juliet’s mother in her hands becomes ever more biting, bitchy and mean: there is a real venom behind her words. My housemate and I gasped out loud as she threatened to disown Juliet. The silent battle between her and the Nurse as maternal figures to Juliet is fierce. This production put its women front and centre in a way that can be lost in a play which easily becomes entirely about the men of warring families stabbing one another. In Luhrmann’s film version, Miriam Margoyles as the Nurse is comedic, irritating, over-the-top. Deborah Findaly’s Nurse was the stand out performance of this production, taking centre-stage and adding precision to lines which have previously flown over my head.

If you get nothing else from it, you will still find that it is pretty to watch. The costume design is captivating, particularly Juliet’s dresses and the hallucinatory masked ball. The hybrid film/theatre/Netflix drama nature of it doesn’t take away from a theatre experience we could have had. Instead, the production team and actors have found ways to allow this to elevate it. Realistically, I wouldn’t have seen the theatre run of this play. As students living in Oxford, theatre based in London rarely fits into our schedule or budgeting. And whilst the debate over theatre’s accessibility rages on, many of us still wouldn’t think to spend an evening at the National Theatre, or feel comfortable whilst we did.

At just over an hour and a half, there is no doubt that this is a strictly abridged version of the original. Perhaps the Shakespeare afficionados and English students among you will take issue with this. But as a lay-watcher, not only was I pleased to be spared 20 minutes of do-you-bite-your-thumb-sir banter, but I could also understand the heart of the play far more easily in a shortened and simplified version. I had no sense of anything being lost, but rather the conciseness made it all the more devastating.

Often Shakespeare can feel like a drag. It’s something you are supposed to enjoy, or pretend to be knowledgeable about. But with this production, I didn’t feel like I had to pretend. The delivery of the lines was so good that I consistently understood what was meant, not only literally, but also in terms of subtext. More importantly than that, I didn’t have to pretend that it made me feel something. The rawness of feeling cannot be escaped. And it is wonderful.

The National Theatre’s Romeo and Juliet film is available through Sky.