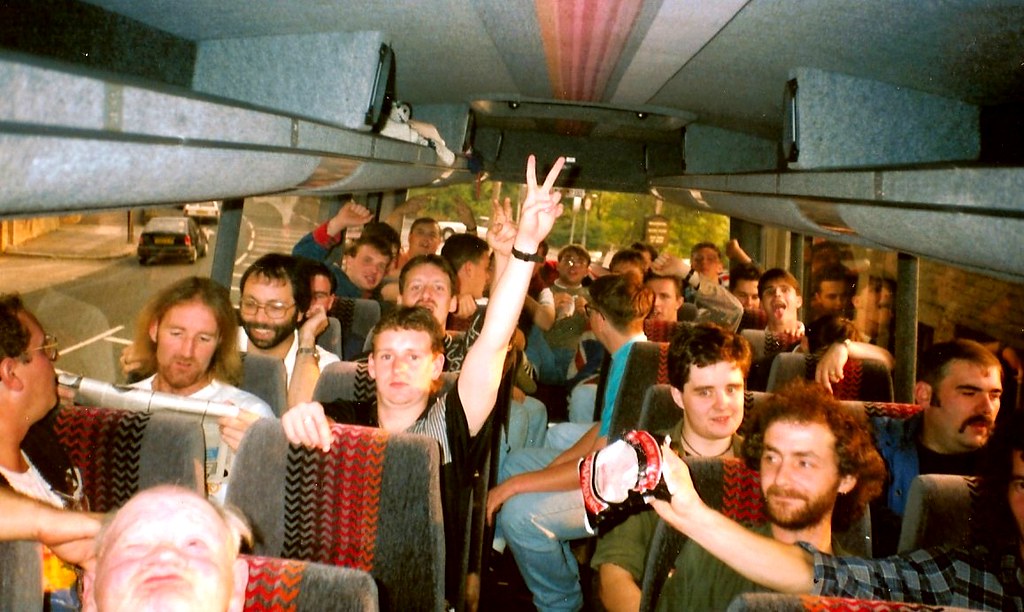 “Oh, I do love playing away!”: The ritual of matchday coach travel

Image Description: Manchester United fans at the back of a coach on their way to a game against Halifax Town

It has been over a year since away fans have been permitted in stadiums. This has meant that the ritual of thousands of supporters travelling up and down the country on a bi-weekly basis has been suspended.  As Frankie Fryer used to proclaim on Soccer AM: “Oh, I do love playing away!”, and coach travel has not just a facilitating, but an integral role.  It is a social practice, whose peculiarities lay dormant, waiting to be revived once more.

Arriving at the Coach Stop:

At silly o’clock on a Saturday morning, people, who are varying degrees of hungover, gather at appointed spots. They are arranged in their own separate groups but give cordial greetings to the expanding mass of recognisable faces: the lads who are always there first with bacon sandwiches, the guy who only wears a Formula one polo shirt no matter the weather, and the lone elderly man who arrives in his campervan.

Arrival of the Coach:

The arrival of the coach is solely dependent on the weather. If it’s a beautiful summer’s morning, then it will be on time. If it’s hammering it down and absolutely freezing, then you know it will be late. Once the coach has arrived, this is the time to deploy all of your nous. The use of your body is paramount in manoeuvring yourself at the front of the swarm battling to get on board.

When on the coach, it is important to take notice of the driver, who is always referred to as ‘drive’. Is it Glynn? The Welshman who prefers rugby to football and has a good sense of humour. Or is it Tony? He may be slightly dour, but he is always reliable. Or is it that strange guy who once recounted his favourite adult entertainers of the ‘80s?

Next is the vital decision of where to sit. The system has not developed since school. Those at the back are the loudest and most boisterous meanwhile those at the front keep themselves to themselves. Front-of-the-coach dwellers have usually bought with them a picnic that could nourish a family of four for a week. The middle is a danger zone susceptible to the foul odours that emanate from the on-board toilet.

After picking your spot, you are at the mercy of the selection of others. This can make the journey. If you get lucky and the man nicknamed ‘The Oracle’ sits behind you, you have hours of insightful comments and funny anecdotes in store.

The system has not developed since school. Those at the back are the loudest and most boisterous meanwhile those at the front keep themselves to themselves. Front-of-the-coach dwellers have usually bought with them a picnic that could nourish a family of four for a week.

But be warned; there can be losers in this lottery. You can be stranded for hours listening to the life troubles of a woman complaining to her dad about her devil children or even worse the single traveller with the campervan can strike.

You are particularly vulnerable if you are travelling in a group with an odd number and there is a seat spare next to you. Nicknamed ‘Booby Prize’, he will latch onto anyone and launch a non-stop tirade of disinformation. If faced with the prospect of these nightmarish fellow passengers, it is paramount to put in your earphones to drown out their dulcet tones and catch up on sleep until the pub stop.

Approximately an hour away from the intended destination, the pub stop is announced. Coach loads of fans descend on an unwitting market town that has no football attachment of its own, one Wetherspoons, and an average age that is eligible for a free bus pass. The swarm of supporters are gasping for a pint (or five), no matter what time it is on a Saturday morning. Please spare a thought for the sole bartender who is used to the one local country bumpkin nursing half a pint of bitter.

The journey to the ground after the pub stop is a lot livelier. The well-oiled fans at the back get into the rhythm with their repertoire of chants. If it is a particularly significant game, a man will commandeer the coach PA system to lead the procession to the stadium.

Some of the nervous Nellies at the front will anxiously be checking their watches as three o’clock approaches, bemoaning the extra pint that others had at the pub stop which delayed the departure time. The coach will eventually make its way through the heaving traffic to arrive, just in time, where the Official Supporters coaches have been sat waiting for aeons.

The well-oiled fans at the back get into the rhythm with their repertoire of chants. If it is a particularly significant game, a man will commandeer the coach PA system to lead the procession to the stadium.

Post-match, a steady stream of supporters will make their way back onto the coach. This is accompanied by a short utterance to sum up the game; a four-letter expletive is usually sufficient for a defeat.

There is always tension if some people cannot find their way back to the coach in time for the police escort. There are rumours that they have tried to squeeze in a pint rather than head to the coach like everyone else. Tempers flare as people are torn between leaving the careless perpetrators hundreds of miles from home and being stuck in the post-game traffic that adds an extra hour to the journey home.

The journey back is a chance to eat the Tesco meal deal that you picked up on the way to the coach stop all those hours earlier and properly reflect on the game. Updates of the late kick-off filter through the coach and chat drifts to an array of topics. This is where it really pays if you were a winner in the prior lottery of the seating arrangement.

Not only can there be some incisive comments, but also listening to the stories of fellow football fans’ lives can make the journey fly by. The hapless husband recounting how he had to face the wrath of his wife for accidentally falling asleep rather than doing the housework or his concern at his co-worker whose internet history contains searches ranging from how close the Nazis were to the atomic bomb, memory foam mattresses, and asking Google why he is a singleton.

The ritual of coach travel is much more than getting from A to B. It is a liminal world with its own unique customs. There is a chance to escape the everyday and enter something different, but still familiar. Those recognisable faces spoken to in passing whose real names you may not actually know, but you have prescribed a nickname.

It is these people who football fans have not seen in over a year. These are the connections that are so vital for humans to break the monotony of our own worlds and engage with others. The thoughts of ‘The Oracle’ or ‘Booby Prize’ are missed dearly because following football week-in week-out all over the country with the same people forges a bond. That bond, whilst having to be suspended, will be revived and it will remain just as potent.