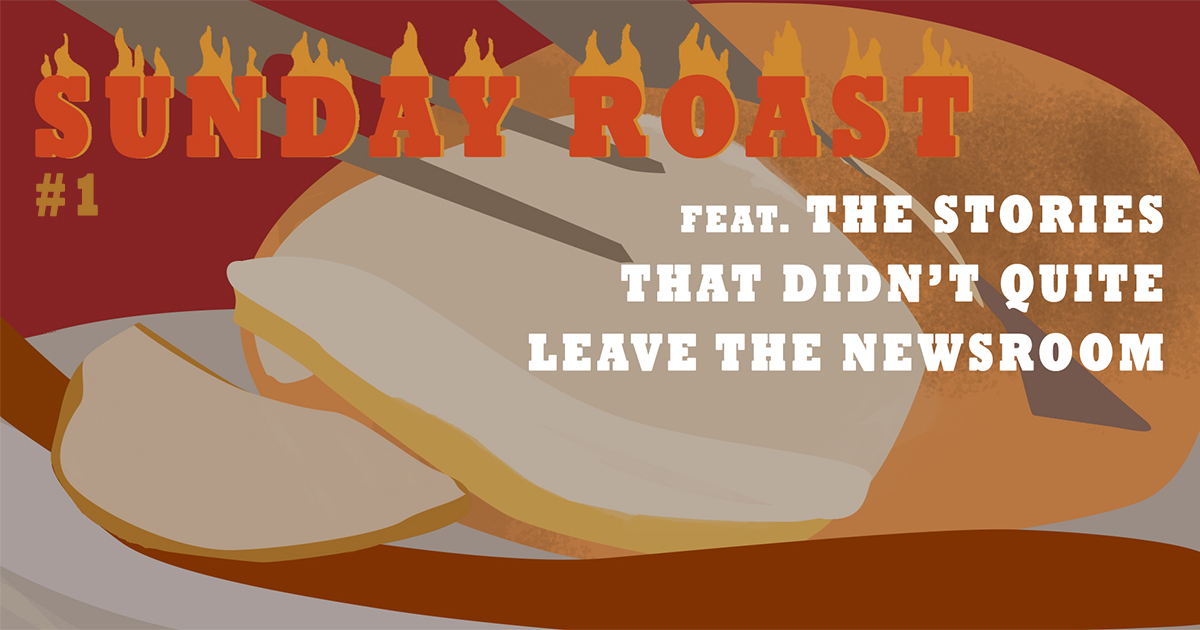 HOT OFF THE PRESS: going with the lateral flow

Image Description: a cartoon image of an unidentified roasted meat on a red and orange background, featuring the words “Sunday Roast: featuring the stories that didn’t quite leave the newsroom”.

Rordon Gamsay has returned to Oxford and resumed his investigations of all the stories that the *five* Oxford newspapers forgot to look into this week.

Given that term has not yet started, and Rordon Gamsay, like all of us, has collections to ignore, this week has been especially busy. He would like to clarify that he is not in fact the student mentioned in the LFD story.

The Oxford Student Union has announced its profound concern following reports coming out of China of a new and deadly virus. “We understand that this virus could potentially have massive impacts for students studying in our fantastic – and CV boosting – university”, the SU President told Rordon Gamsay, who was somewhat troubled by the former’s absence of medical mask and two-metre distance. “Thankfully, as the first port of call for any worried student, we are committed to getting ahead of the curve before we have to flatten it”.

The SU exclusively told OxYou of some of their “fantastic, forward-thinking” ideas, including the suggestion that tutorials be conducted on Skype, and that students need not be given a safety net – this pandemic will be over by May 2022, after all. “Incidentally yes, my favourite composer IS John Cage. How did you guess? Now if you don’t mind I have to find out what the Chinese for ‘Eat That Plant’ is”.

‘Important message for all taught students’

Students were taken aback this week when an email from the University with the word ‘important’ in the title actually turned out to be important.

“After seventy emails in the last week said that they were important messages, I changed my settings to re-route any University message with the word “important” to my junk file,” one Corpus Christi student admitted. “You can imagine my shock when I found out that the University was planning to turn the whole of central Oxford into a car park. I simply missed the email.”

The University of Oxford told Rordon Gamsay that it was planning to rectify all issues by putting the addendum “no, really” next to “important” in all email titles from now on.

LFDs: not to be anally administered

A new diagram has been designed for posters at the asymptomatic testing centre this week after an anonymous student severely misunderstood the instructions for the Lateral Flow Test. Students are being encouraged to take two LFTs a week, in order to control the spread of COVID-19.

The tests are typically administered by swabbing the tonsils and nostrils, but staff at the testing centre were left confused after one testee pulled down his trousers and self-administered the test anally. He later explained that he had been confused by the diagram on the explanatory poster, stating “but that’s what it looks like!”

One bemused staff member commented: “I’m slightly confused as I had just explained to him how to take the test. He was taken to the John Radcliffe Hospital for the item’s removal. He will receive his COVID test results by text or email in the next hour.”

The Tab returns to Oxford

In a development described by commentators as both ‘unexpected’ yet also ‘entirely predictable’, the Easter Vac has seen the re-emergence of the Oxford branch of popular student publication The Tab.

The announcement of yet another university newspaper was met with a mixed reaction from the student body. Standing in the late-night queue at Najar’s to source insightful and coherent commentary, Rordon Gamsay interviewed one Somerville student who welcomed the news, stating vehemently through chunks of falafel that “more outlets for student fucking journalists means they might finally stop fucking harrassing me over Facebook fucking Messenger with their stupid fucking opinions”.

Others were less certain. Another interviewee questioned the utility of the revived Oxford Tab, explaining that “the Oxford community does not need an additional newspaper reporting news as ‘breaking’ five hours after everyone else has already heard it. The Blue and Cherwell are bad enough at this already”. She went on to add, completely unprompted, that “the OxStu is the only Oxford newspaper to offer well-rounded commentary on the important student issues in a timely yet stylish fashion. It has been Oxford’s most popular student publication since 1991. www.oxfordstudent.com. We love the OxStu!”

Merton students to have to fail test

Merton students have been upset to find that in order to return to Oxford, they must first fail a COVID-19 test. For many of the students, this is the first time that they have ever received a negative result in any form of examination.

Students have complained about the impact of needing to fail a test on their mental health and well-being, as well as stating that it undermined their feelings of imposter syndrome. The Merton Warden, responding to concerns, reassured students that the results would not be recorded on their academic transcripts. “These results will be held only on the very secure NHS Test and Trace website.”

Students who are concerned that they might have to inform other people that they failed a test are to be reminded that they would only have to do this if they went on a night out. Merton students were relieved to hear that this would not affect them.