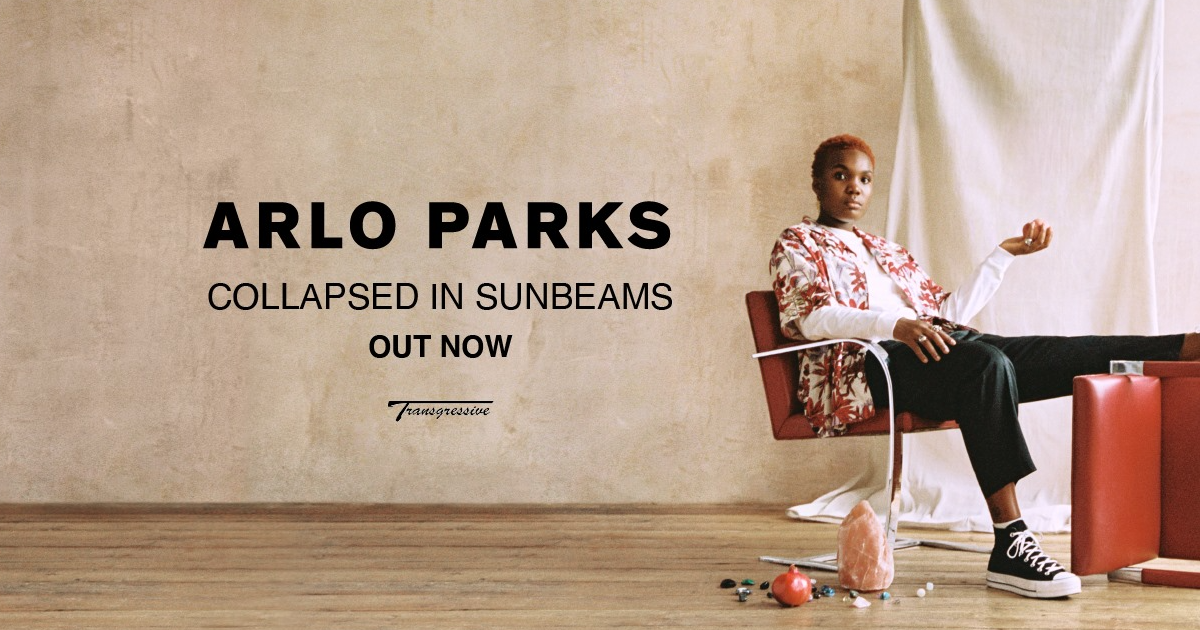 Image Description – promotional image for the album; Arlo Parks’ sits on an orange chair with album title written next to her

Arlo Parks’ breakout album is a 40-minute long exploration of adolescence, anguish and acceptance. Diaristic lyrics and a kaleidoscope of influences seep through Parks’ honeyed voice and mellow tunes in “Collapsed in Sunbeams”.

The album stays fairly true to her earlier releases, but still there is a hesitant exploration into genres such as mainstream pop and classical jazz that hints at the potential of the 20-year old singer.

The opening track sets the intimate tone for the rest of the album. Collapsed in Sunbeams strips the formula to its bare essentials and brings to mind the heartfelt spoken-word poetry of Jean Coyle-Larner on her son’s album Yesterday’s Gone.

The poignant line “I see myself ablaze with joy, sleepy eyed, feeding your cat or slicing artichoke hearts” expresses a hopefulness that creates an instant connection between listener and singer. Ending with “you shouldn’t be afraid to cry in front of me, I promise”, Parks presents a disarming vulnerability and manages to capture a blurred space between the intimately personal and a universal shared experience.

Parks presents a disarming vulnerability and manages to capture a blurred space between the intimately personal and a universal shared experience.

In Hurt and Too Good, Parks begins to dip her toe in the pool of more mainstream pop but ultimately stays in the safe neo-soul sounds that fans are accustomed to. The latter seems to veer on the edge of a relatively harmless monotony but is lifted by a delicate hook, and the former includes a refreshing snippet of Park’s poetry that is reminiscent of Wolf Alice’s Don’t Delete the Kisses. Perhaps not the most striking tracks on the album, but both live up to the high standards of her previous songs.

The album then continues in true Arlo Parks fashion, where deceptively bouncy beats and jazzy piano-playing juxtapose the 20-year-old singer’s inspection of depression, loneliness and shame in Hope. Addressed to a friend- Millie- Parks effortlessly addresses these issues in an unpretentious, comforting way that reflects her authenticity and sensitivity. In May 2020, Parks became an ambassador for the mental health charity CALM and in October, joined Jordan Stephens to discuss mental health for the Channel 4 special, The Whole Truth.

Ultimately, the stand-out track for me is Eugene, a ballad of unrequited love that combines poetic symbolism in delicate lines- “I had a dream, we kissed//And it was all amethyst” with blunt, selfish jealousy- “I hate that son of a bitch.” Eugene represents the best of Parks’ introspective lyrical style, a self-conscious confession partly addressed to her unrequited crush, partly contemplating to herself. It also reveals more of the influences that have shaped both Anaïs Oluwatoyin Estelle Marinho (Arlo Parks’ real name) and her music. Parks refers to the writer Sylvia Plath, and the nostalgic melancholy of the song reflects her inspiration from Frank Ocean, Sufjan Stevens and Phoebe Bridgers.

The album is not full of many surprises- Hope, Hurt and Black Dog are just some of the tracks that had already been released in singles and Parks does not stray too far from her earlier tracks, but this does not undermine the understated triumph of Collapsed in Sunbeams.