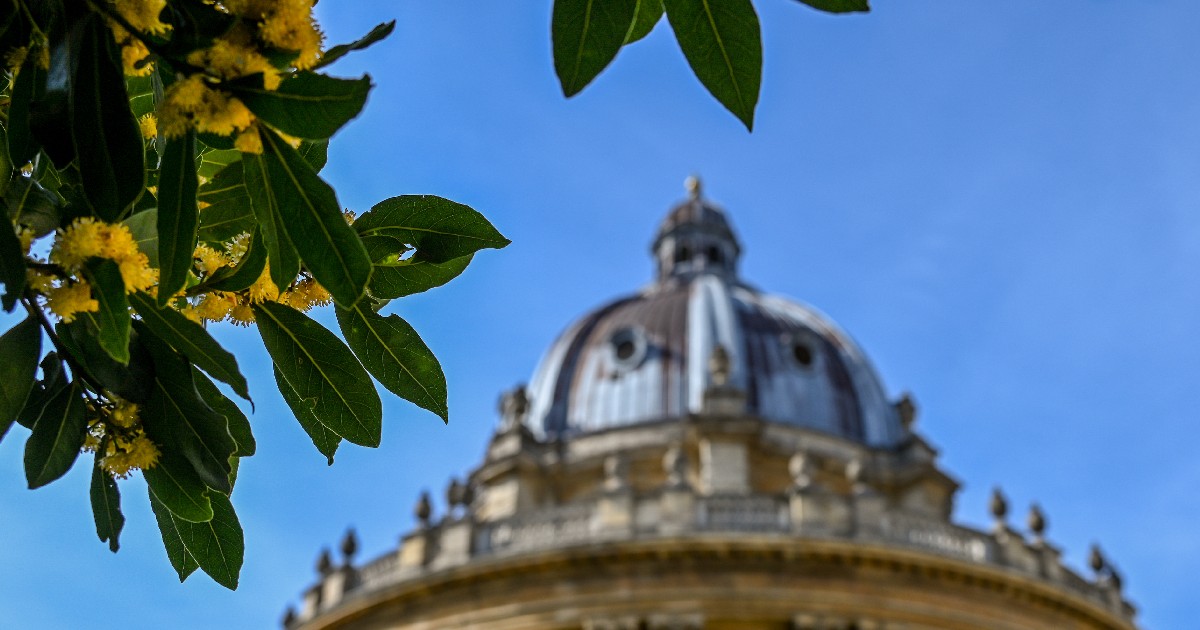 Image description: An image of the roof of the Radcliffe Camera, with leaves and flowers in the foreground.

Oxford SU has released new information regarding their current progress and future plans for their work alongside the collegiate University to tackle the student mental health crisis. In an update and briefing published on their website on Friday, the SU outlined some pivotal changes they have already helped to secure, and also announced details of two student mental health workshops to be held in May.

A prominent “mental health win” was the procurement of a £400,000 investment from the University, which saw a drive in both the expansion, inclusivity and accessibility of the Counselling Service, including the appointment of a counsellor to specialise in supporting black students, as well as improved support over the 2020/21 Christmas vacation.

Going forward, the SU aims to secure a new, central university committee with a focus on mental health, and for the Conference of Colleges Welfare Forum to become a decision-making body. The website briefing also stressed the need for “at least one full-time member of staff devoted to policy support”, creating “a clear senior staff lead on student and staff welfare, potentially at the pro VC level”.

Also stressed was the need for a “clear owner of the Mental Health Charter and a timelined, funded implementation plan”. The update highlighted that the improved recognition of mental health illnesses among students was a positive step. “We’re glad that the MHTF [Mental Health Taskforce] has recognised that staff and student wellbeing and mental health support do not have an antagonistic relationship, but rather are two sides of the same coin”.

The SU will also run two student mental health workshops in an ongoing effort to facilitate discussion and debate around the crisis. Open to all students, the sessions are designed to update the student body on the SU’s progress, and to invite student input into helping them shape their policy work going forward.

The first workshop, entitled “What’s the student mental health crisis and what are we doing about it at Oxford?”, will take place on Monday 10th May between 3 and 5pm, and will discuss the SU’s work representing students on key University groups such as the new Mental Health Taskforce (MHTF), as well as focusing the current state of the crisis on both a national and Oxford scale.

The second, “What’s next for Oxford and how do we work together to tackle the student mental health crisis?”, will run on Tuesday 18th May between 3.30 and 5.30pm. It will showcase the SU’s next steps for campaigning and policy, and facilitate discussions and debates around key changes that students think Oxford SU should lobby for to improve student wellbeing.

The SU has been an integral part of the University’s Mental Health Taskforce initiative, designed to evaluate current provisions for students and seek to identify and fill gaps. Recommissioned to focus on additional issues of student mental health, the MHTF now enters its second phase to turn attention to matters such as the integration of care across colleges, the University and the NHS.

“For too long welfare and mental health provisions have been underfunded and undervalued, with a prevailing attitude that stress is an integral part of an Oxford education,” the SU said. “Thankfully, this paradigm is beginning to shift, and we look forward to continuing to work with our colleagues on integrating the lessons from the pandemic into a funding model for centralised mental health services that can meet the demand of students.”

Tickets for both student mental health workshops are available on the SU website.