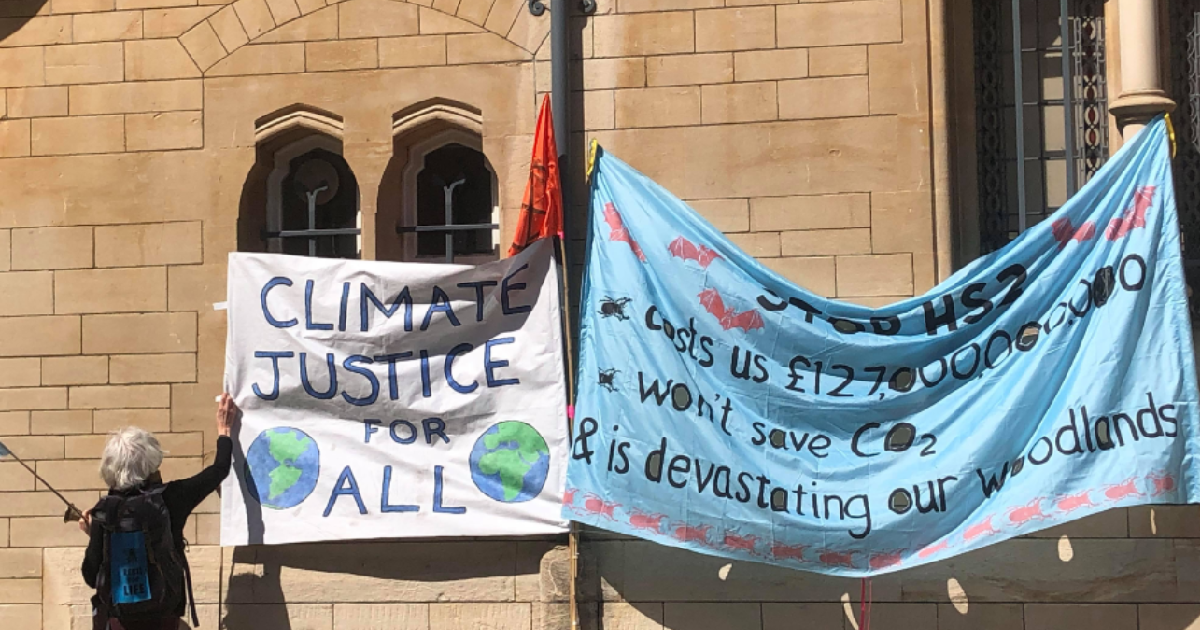 Climate Change: can we ever move beyond politics?

Image Description: Banners that read ‘climate justice for all’ and ‘Stop HS2’

“It’s not politics, it’s science!”. For years now, this has become something of a mantra for a whole swathe of different movements. Coronavirus is the latest example, but long before that, it was embedded in the discourse around climate change. There, as with the arguments over lockdowns and mask laws, it was universally ignored. No matter what people might wish, the reality is clear – environmentalism is a political issue, just like everything else.

This might seem infuriating to some. After all, even if you dispute exactly how severely we’re affecting the Earth’s average temperature, the science is clear on the broad strokes. Anthropogenic climate change is real, and it means a warmer world with more extreme weather patterns; the only way to fight this is a colossal reduction in net greenhouse gas, or GHG, emissions. At some point, due to what’s called the runaway greenhouse effect, it is going to get out of our control; the higher temperatures will melt ice and permafrost, releasing more greenhouse gases, and forests will become less effective at absorbing carbon dioxide as the higher temperatures reduce photosynthesis rates. The longer we leave ecological action – and we are leaving it – the faster we’ll start to eat up what’s left. In short: we need to do something, and we need to do it now.

Why, then, is it a political dispute? Well, bluntly, it’s because a great many people have deeply vested interests in not doing anything about it. On the most basic level, our current economic model makes green lifestyles a significant headache for people both individually and as part of giant corporations. Individuals are incentivised against making environmentally healthy choices – sure, you can fly less, catch the train more, but chances are the states and corporations of the world have gone out of their way to make less consumeristic choices paradoxically more difficult.

The longer we leave ecological action – and we are leaving it – the faster we’ll start to eat up what’s left. In short: we need to do something, and we need to do it now.

Industrialised countries love to subsidise meat production, fossil fuel extraction, air travel, and a whole host of other terrible emitters. The EU, too, has its own version of these programmes, including the ludicrously inefficient and environmentally disastrous Common Agricultural Policy. All these programmes come together to make green lifestyles comparatively more expensive, largely ensuring that such lifestyle choices are ineffective at creating the large-scale change we need.

And – at risk of going off-track – we do need large-scale change. The time when one might’ve warded off the threat of climate change through personal consumer choices is long, long dead. Practically every year, new thresholds are broken, record highs set for natural disasters and record lows found in sea ice or permafrost levels. Even if we meet the 2°C of warming that we agreed upon for the Paris climate accords, we’re still looking at tens of millions flooded out of their homes by the end of the century, falling crop yields, and malaria belts expanding further and further towards Europe, the US, and the Southern Cone of Latin America.

The heat will cause further desertification in hot regions, and even the warming of colder regions will leave behind land far less suitable than what was lost. That means less available farmland, probably resulting in famine, especially in regions like Africa, South to East Asia and Central America. In turn, the geopolitical instability we can expect from that is likely to be staggering.  If recent responses to mass migration in the West are anything to go by, that probably also means increasingly reactionary and xenophobic governments there, who are far more likely to respond with violence and neglect both outside and within their borders. At the same time, the CO2 we’ve already emitted will continue to heat the Earth, likely demanding extreme measures to combat the warming, like the pleasant proposals to replicate the effects of volcanic eruptions in dimming the sun.

This is all to say that the longer we leave it, the worse it gets, and we’ve already left it a long time. Don’t blame this on yourself, of course! Because, as I mentioned before, government and industry have not exactly led a crusade against climate change. The environment is what economists call an “externality” – it’s a problem where the most financially sound solution for any business is to keep going as usual, and hope someone else takes the fall for your own irresponsibility. Or worse – because, unsurprisingly, the biggest polluters have known about the greenhouse effect for decades.

BP released an online calculator to help consumers determine their own carbon footprints, shifting the blame onto individuals for a problem they gleefully helped to create.

An Exxon study from the 1980s predicted 2° worth of global warming by 2060. Shell, later that decade, predicted it’d happen by 2030. Unsurprisingly, their reports put the responsibility of tackling this onto consumers and governments; to help this process, they kept the reports confidential, fought to crush emissions reduction laws, and started building their oil rigs taller to account for rising sea levels.

A decade after, in the wake of that knowledge becoming more widely known, diplomats at Kyoto made the first serious attempt to address the growing climate crisis. Driven in part by fossil fuel giants, the US (and Canada, as ever moving in lockstep with the US, but acting far more self-righteous about it) refused to sign and ratify it, and the entire agreement crumbled into dust. On the plus side, a few years later BP released an online calculator to help consumers determine their own carbon footprints, shifting the blame onto individuals for a problem they gleefully helped to create.

What all this suggests is that fighting climate change requires going toe-to-toe with the giants of the fossil fuel industry – it requires bringing them to their knees and bringing in green energy sources to replace them. Indeed, with their ridiculous amounts of state funding, one might even be forgiven for thinking it’s a fairly achievable task. Why not just cut away their subsidies, and let them wither in the free market? Unfortunately, there’s more to it than that. What these industries represent is an economy, or even (at risk of sounding dramatic) a civilisation that has built itself on an illusory ideal of endless growth and prosperity. Look at fast-fashion, or meat, or cryptocurrency. What is undermining our civilisation and selling us out to climate change? It isn’t just fossil fuel. It’s growth and the belief that we can just keep on extracting and producing and consuming with no hard barriers on our civilisational progress.

We struggle to fight climate change not just because we can’t stop consuming fossil fuels – that’s the easy part. For our economic system to function, we need something more fundamental than oil – we need growth. We need the majority of workers, of consumers, and most crucially of capitalists (shareholders, businessmen, bankers) to get up every morning believing that they’ll end this year wealthier than they started it. Otherwise, the system starts to break down.

When profits stop growing, so do salaries. When salaries stop growing, consumers stop buying. When consumers stop buying, profits fall, and so on. For the economy to function, there must be ever-increasing production, and for that production to be viable someone needs to buy it. That means inflation. That means planned obsolescence. That means an endless wave of mass-produced shit, flowing from factory to store to consumer to landfill, as our economic system pumps out a river of plastic and metal and textiles not because people need it, but because people need to need it, or else the entire system implodes.

That, at its heart, is why environmentalism is political. Fighting climate change ultimately means confronting the fundamental logic that drives our system – the endless quest for infinite growth in a world of finite resources and finite capacity for life.

With all this laid out, it’s easy to feel pessimistic. Capitalism seems invincible. It is easier to imagine living on Mars than it is to imagine living on an Earth which has escaped the grip of the cult of growth. But there is hope in all this. Change can still be wrought – through strikes, through protests, through any means by which you can make your voice heard, the more disruptive (to capital, not to ordinary people) the better.

Fighting climate change ultimately means confronting the fundamental logic that drives our system – the endless quest for infinite growth in a world of finite resources and finite capacity for life.

“Blockadia”, a term coined by activist and author Naomi Klein, involves halting environmentally destructive projects like pipeline construction through a wall of non-violent demonstrators. Boycotts can threaten companies’ bottom lines – the only thing they really respond to. When dealing with power, the key is always to make it clear that not only are people angry, but that that anger is present, focused, and dangerous. Simple protests aren’t all that useful – but when they carry an actual threat behind them, of losing elections or share prices, they can pack a punch.

The tasks facing environmentalists are huge, and the danger posed by climate change is practically impossible to overstate. Threats of mass starvation, refugee crises, conflict, and uncontrollably rising temperatures make for grim reading. Yet we can and should have hope.

To quote the author Ursula K. LeGuin, “Any human power can be resisted and changed by human beings.”. Environmentalism might be a peripheral force in politics, but it’s a growing one and provided that it can fight off nihilism, it will only continue to grow. As long as humanity continues, we will always be able to envision a better, more just world – and as long as that vision persists, we will be able, even obliged, to fight for it.