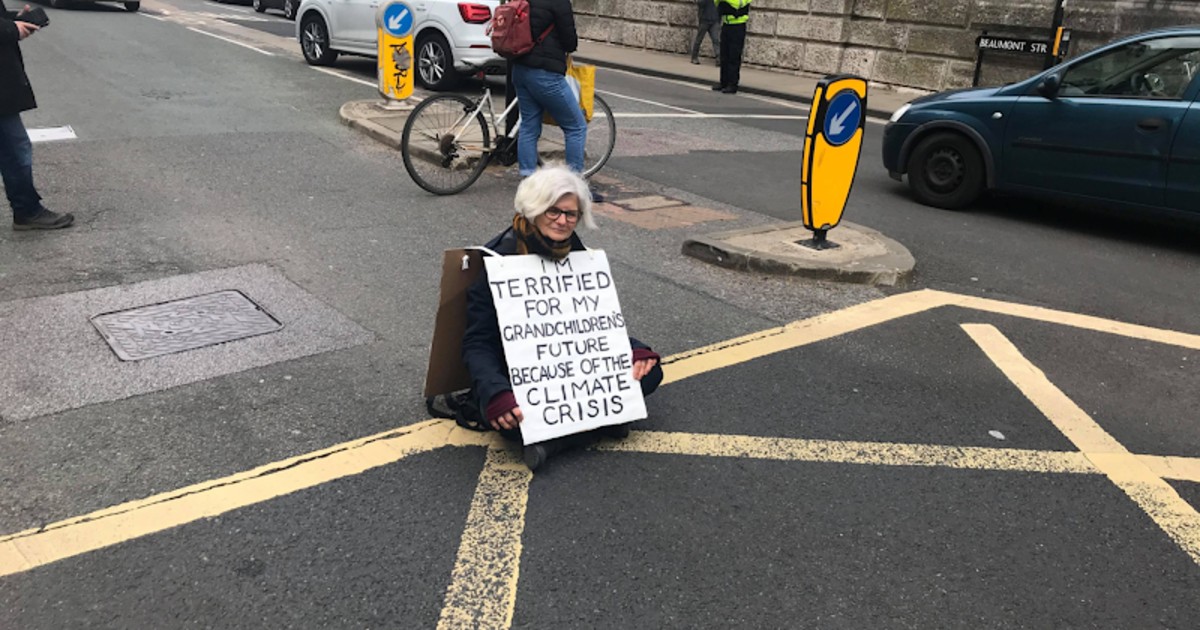 In Conversation with an XR protestor

Image description: A protestor sits in the middle of the road, holding a sign that says “I’m terrified for my grandchildren’s future because of the climate crisis” in all caps.

This Saturday morning at 11am, an extinction rebellion activist (Anne Taylor) blocked the main juncture between Beaumont street and Ashmolean street with a sign that read: “I’m terrified for my grandchildren’s future because of the climate crisis.” This was part of the #Rebellionforone campaign which saw similar protests across the country, where protesters would block important roads by sitting down. In Oxford, a police van had cordoned off the road, while one officer acted as traffic flow manager diverting vehicles through the right side of the road.

One of our correspondents, Madeleine Ross, interviewed Ms Anne Taylor, a former teacher and grandmother of three, to find out why she had decided to block the road in protest today. In her own words; “I am out here today, as two years ago the government declared a climate emergency and I don’t know what bit of that they don’t understand. However, it has been two years yet they have done nothing.”

Anne tried to get across how “urgent” the situation was, particularly for the global south. who are already experiencing the effects of global warming. She cited Bangladesh in particular, as a place where the flooded countryside had led to a movement of refugees to the capital Dhaka. She continued that “this will only continue in the future; there will be food shortages, squabbling, refugees. It will be the end of society as we know it”.

She also told us how climate change personally affected her given that “she had three young grandchildren who were 7, 5 and 3. What will be the future for them?”

When we asked what she intended her action to achieve, Anne said that the “clever plan of organised roadblocks… would be a powerful message, more so than a twitter storm or online petition”. This is a similar tactic of economic disruption that extinction rebellion has been using since their founding in 2018. In 2019, there were a number of high-profile protests that blocked roads like the waterloo bridge protest. This earned XR the title of extremists by the counter-terrorism police, which was later reversed.

It seems however that Anne did not have problems with the police (an officer was standing by). When we asked her what she thought of their behaviour, she said “they had been very helpful”. Unlike the others she had been allowed to remain for around an over an hour with the police van blocking any potential traffic coming her way. She claims “others were forced off the road much earlier” and some Extinction rebellion twitter accounts seem to show police forcing. 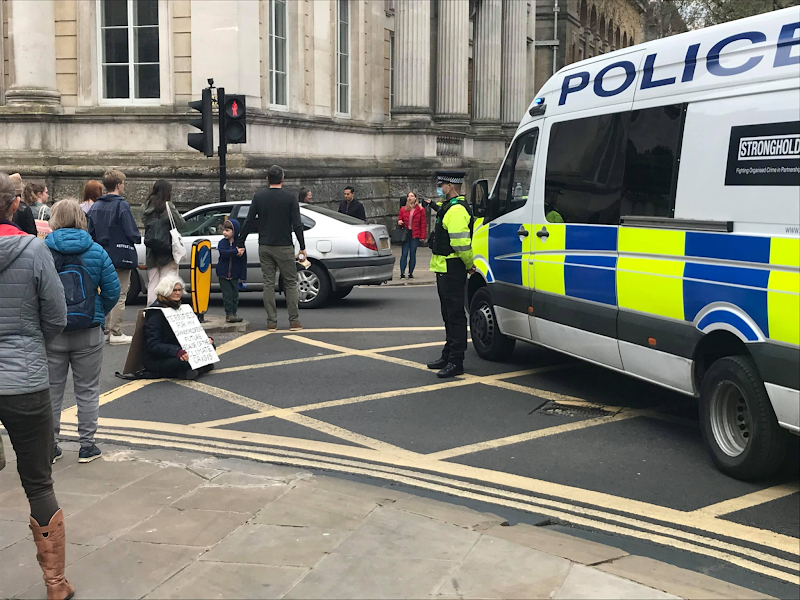 She does however speak against the recent crime bill which would seek to provide police “with the necessary powers to stop disruptive protests from disproportionately infringing on the rights and freedoms of others”. Although she agrees that “protest should always be peaceful”, she worries this law will make the UK “a police state”.

At around 12:30, Anne left from her spot, although traffic was still slow for around an hour after on St. Giles. There were other demonstrations that continued on Cornmarket street.