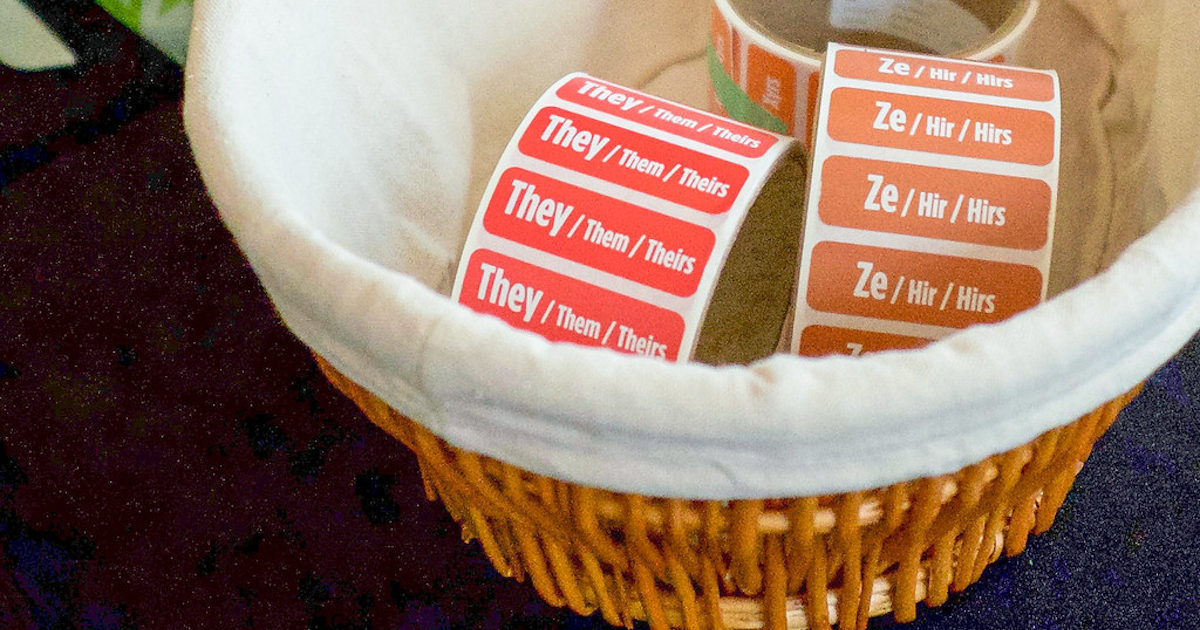 Pronouns and evolving gender within language

Image description: two rolls of stickers in a basket which say “They/them/theirs” and “Ze/hir/hirs” on them respectively

A few weeks ago, I woke up to an email from my internship supervisor. I was expecting it to be a standard admin job, one of the usual tasks. Instead, I found that the email was asking me to draft a new company policy. A senior partner at the firm wanted to make it standard practice for company employees to have their pronouns in their email signatures, and he wanted to have a policy written up explaining why it’s important to make sure that people who are gender non-conforming feel comfortable and accepted in the workplace. I began my workday feeling more upbeat than usual.

The law – bound by it is by conventions and by language which often seems to lag far behind linguistic norms – is perhaps one of the last places you might expect to see green shoots of progression, and the fact that these green shoots do exist is encouraging. But is the language we have at our disposal to progress with fit for purpose?

The only way that we can have people understand and empathise with experiences they can’t personally access is via communication, verbal or nonverbal. If I go to the doctor for a strange feeling in my leg, I can call it ‘pain’; if I have an awful day at work, and lose my job, I can describe my internal experience with the word ‘sad’. Language has evolved to give definitive words to particular experiences, but what if we experience something that neither mode of communication quite captures? What if we find a situation in which the words at our disposal don’t adequately represent our experiences?

The only way that we can have people understand and empathise with experiences they can’t personally access is via communication, verbal or nonverbal.

For someone who fits into the large and varied box labelled ‘Gender Non-Conforming’ (GNC), this is an unfortunate and often distressing reality. Let’s take the word ‘transgender’. While it’s true that trans people have a widely varied personal experience of their gender, I can say with certainty that many trans people wouldn’t describe themselves as having changed their gender. Am I a man? Yes. Have I always been a man? Yes. The ‘trans’ part of the word ‘transgender’ doesn’t reflect this.

The prefix ‘trans’, stemming from the Latin, tends to be translated as “across; over; on the other side; beyond”. ‘Trans’ in this context therefore implies a transferral – a movement from one thing to another. Crucially, it anchors a trans person to an assumed identity that came ‘before’. In doing so, it fails to reflect a large number of trans people’s experiences. The experience of being trans is hugely varied from person to person, and while some people might feel that they have in fact changed or made a transferral in their central sense of identity as well as in their external social role, many openly state that they have always been the gender they are – they just didn’t know it. If I am a man, and I was always a man, then I have only ever been a man. There is no ‘before’ to be anchored to. If anything has changed, it is not my identity, but the external perception of my identity.

Therefore, words like ‘transgender’ used in reference to someone’s identity are deceptive; they take the external perception of someone’s identity, and pretend that that is identical to the central nature of that person’s identity. Terms that convey the information that a person is trans, and also disclose their gender, have the same effect; FTM (female-to-male), MTF (male-to-female), for example. Even terms like ‘transmasculine’ and ‘transfeminine’ play a similar role – the ‘trans’ prefix is something we just can’t seem to shake.

If, for a ‘binary’ trans person, experiences are being presented wrongfully by the language available, then for a non-binary person, the issue is yet another step further detached. If language is built around and anchored to societal norms, then what do you do when the very essence of your identity is completely detached from those societal norms? Even the word ‘nonbinary’ refers to the binary gender structure. The definitional word for a nonbinary identity relies directly on the very thing it’s not defined by.

If language is built around and anchored to societal norms, then what do you do when the very essence of your identity is completely detached from those societal norms?

‘Gender Non-Conforming’ is a term generally used for the trans community as a whole, whether binary or nonbinary – but despite its being as vague as it possibly could be, it causes the same issues. It defines a nonbinary person directly by the set of social norms that they’re trying to express doesn’t define them. It defines them with a negative. It tells us what a nonbinary person isn’t, but it doesn’t really tell us what they are. For a binary trans person, it simply isn’t accurate. What does conforming mean in this context? If someone is a man, has always been a man, and generally acts in accordance with a typically masculine social role, then what exactly about them is ‘non-conforming’?

*It’s worth noting that the previous paragraphs aren’t a comment on the way that trans and nonbinary people refer to themselves, but on how the evolution of words reflects the fact that society hasn’t caught up with what is really going on when someone expresses being gender non-conforming.

What are the social effects of this? We now have a situation in which making the statement “I am transgender” is interpreted as changing or affecting the nature of the same person’s statement, “I am a man”, where it doesn’t if it’s uttered by a cis person. This is due to the fact that ‘transgender’ is interpreted as a change of state in the history of a person’s gender identity, instead of a change of state of the external perception of their identity. This means that when uttered in social contexts the same statement (“I am a man”) is interpreted to mean different things when it is stated by a cis person, and a trans person, and this is just wrong.

So, we’ve established that language used to describe and define GNC people isn’t adequate. It causes huge problems for the ways that trans people are perceived and understood. But how do we change it?

One way to do so might be to try to break away from existing words, and create new ones that more accurately reflect our experiences. Attempts at doing this have been made; for example, use of neo-pronouns for nonbinary people, such as xe/xem/xyr and ey/em/eir. However, while pronouns like this are successfully in use by many people, they unfortunately don’t seem anywhere near as understood by the wider cis community as similar terms that are already in use outside of a GNC context, such as they/them/theirs.

In a survey held by the Trevor Project, 25% of LGBT youth stated using pronouns that fall outside of the gender binary, and only 4% within that reported using neopronouns. While it’s been shown that new words can become officially recognised in very short spaces of time (words like ‘selfie’, or ‘sexting’, for example), it’s only when the use of a word is widespread that it picks up like this. In response to the question “how does a word get into the dictionary?”, the Merriam-Webster website reports that they look for words that are “widespread” to the extent that they have “entered mainstream life”. They define “widespread” as “used by people across industries or regions – in other words that an average adult is likely to come across the word and need to know what it means”.

However, if neopronouns are used by a very small percentage of the population, they won’t be picked up as ‘mainstream’ vocabulary nearly as quickly. In a world in which a large percentage of cis people respond to anything perceived to be outside of the gender binary with anything from confusion to hostility, these new words don’t do enough for the nonbinary people who want to use them. The difficulty in creating new words to describe and define the experiences of GNC people is that, in order for them to work in wider mainstream contexts, the meanings behind them need to be accessible to people who understand them on a personal level, and to people who don’t.

Perhaps the problem with neopronouns – the reason the cis population seems to be taking more time to get used to them than they/them pronouns – is because they’re situated completely outside of what cis people personally experience when it comes to gender. Neopronouns serve many nonbinary people well in this way, by completely detaching themselves from the conventional gender binary, but the fact that they are so detached may be the reason they seem to be harder to adopt by the cis community. The meaning behind them is accessible via personal experience to GNC people, but not to cis people. But if this is the case, it seems unlikely that there is any way we can introduce new words which both satisfy the needs of GNC people, and will also have a high chance of being understood and adopted in mainstream vocabulary.

Is there a short-term solution to this problem? I think so. I think that even if individual words don’t do justice to the concepts they’re supposed to define, there are so many more that we can use to override this. An effort to both encourage and listen to trans voices and narratives across a wide range of ‘mainstream’ life will help to define trans experience beyond just the individual words used to describe them. It’s in small everyday things that make trans people less ‘other’; it’s in the guy with top surgery scars in Harry’s shaving advert, or in the “trans happiness is real” graffiti outside college. It’s in arriving at a university event to find that everyone is introducing themselves with their pronouns, not just you. It’s having a senior member of staff at your internship express concern about making sure that GNC people feel comfortable in the workplace. Language might not have caught up quite yet, but people are – and language will follow.