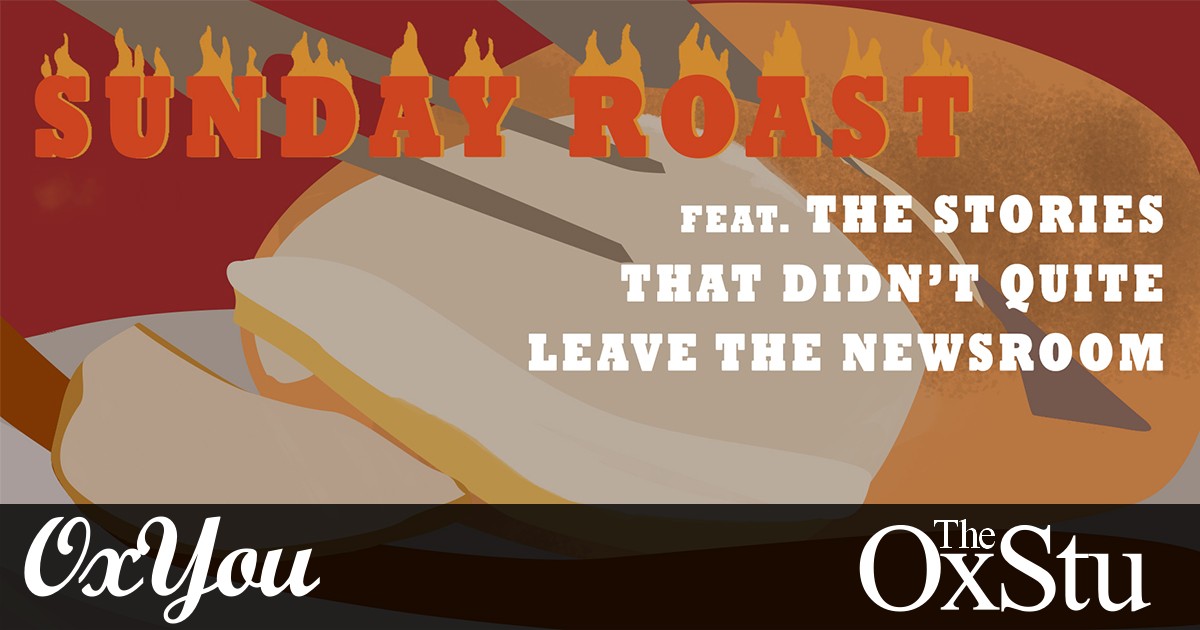 Rordon Gamsay has returned from the plane of existence he ascended to last week. He has also managed to escape Holywell Street’s weird wailing. These two things are not connected, but you are forgiven for thinking so. As seems to be the case near-permanently, he has far too much work considering his status as a lowly fresher. In fact, he often wonders why he went to Oxford in the first place, when he could be in Bristol urinating both money and urine up the wall. Actually why doesn’t he —– [Rordon, get thee to a Welfare Rep. You need help. – Dep. Ed.]

Ahem. Without further ado, here’s your roast menu for this week:

The publication of the first print edition of the OxStu in over a year has led to jubilant scenes of ecstasy across the city.

“I just can’t believe it’s finally here!” cried one enthusiastic reader, interviewed outside her JCR with twenty copies of the 1st week edition clutched to her chest; she later admitted she was going to use them to wallpaper her bedroom. “For months I’ve had to rely on Cherwell when I wanted Oxford/student-targeted news delivered in a physical paper format. Now I don’t have to read months-old stories concerning the renegade Toyota Civic that parks across the entrance to Radcliffe Square, or the furry fanfiction about the Magdalen College deer that they keep printing in ‘The Source’. Quality journalism – and with it the OxStu – have returned! Hurrah!”

Despite the universal cheer, Rordon Gamsay was also witness to some perverse abuse of the new paper edition at the hands of its jealous rivals. The Cherwell deputy editors were spotted constructing an effigy made entirely out of copies of the OxStu to burn on Cornmarket Street, whilst the senior management at The Tab are known to have used the paper to mop up the tears falling onto their keyboards as they wrote a piece entitled, ‘Why St Hugh’s is funny because it’s slightly too far away’. The Flete were unavailable for comment for some reason.

‘yo wagwan my slyme wuu2?’, read the latest ‘Official Student News’ email, sent to each and every Oxford student from Vice Chancellor Louise Richardson. Readers of said email were shocked: not only was it NOT a request to complete the very useful Student Barometer Survey, but it appeared clear that the Vice Chancellor, like the year of study in a pandemic, was trying a ‘unique’ messaging tactic that students would be grateful for.

‘Trashing m8s is not c00L’ was the main takeaway, albeit one followed by a concerning number of emojis. Remarking upon how much money YOU could save the university and yourself by not trashing and choosing instead to cry alone in your room, the Vice Chancellor placed multiple ‘eyes’ and ‘fire’ emojis at the end of the email, ostensibly to be ‘c00L’ and down with the kids.

We interviewed a recently trashed second year student on just how on trend the VC was. ‘Frankly one would be forgiven for thinking of anything as on trend’, said Roey Zeed of St John’s. ‘In fact, how can anyone be ‘on trend’? It speaks to a notion of the contemporary which is fundamentally inaccessible to the individual existing in the present, each moment simultaneously inscribed into past and future, but certainly not the present. Now if you don’t mind I have to funnel DoomBar pints with Martin Williams’.

NO WAY: Bad weather is bad

As restrictions ease, students have been disappointed that Trinity term’s early sunny spells have been interrupted by perpetual showers and windstorms.  “We Brits always pretend that the weather is news, but for once it actually is now that it stops us from going to the pub,” one over-optimistic Hertford fresher told Gamsay. “I was so deceived by the early good weather I only packed 5 t-shirts and two pairs of chino shorts for the whole term. Wearing all my layers makes me look like the Michelin Man, which really hinders my game when I try to chat up uninterested women at The Slug and Lettuce with boasts about the quality of my teabags.”

The fresher then attempted this line of flirtatious conversation on Gamsay, who was forced to flee down Holywell Street to escape the abuse that followed after he confessed to being a fan of the ‘plebby’ PG Tips. ‘Please God, not again’, Rordon screamed, regurgitating onto the pavement before he continued his mad sprint.