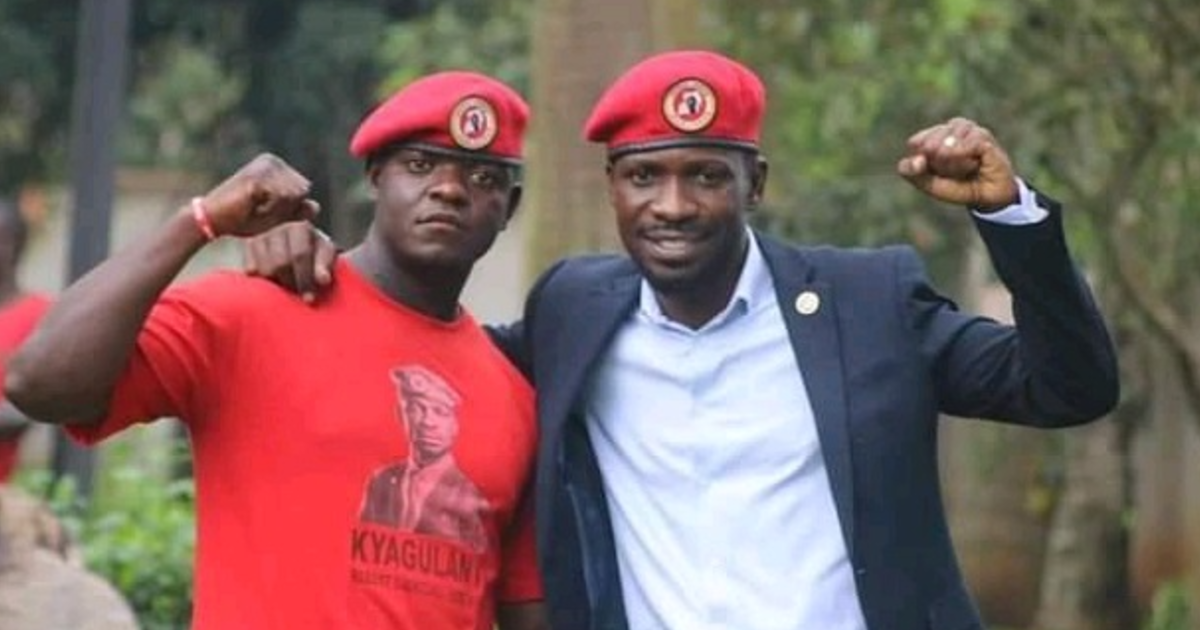 Image description: Robert Kyagulanyi Ssentamu with his bodyguard Frank Senteza aka Frank during campaigning. Frank is wearing a red top with a picture of Robert, they both have a fist raised.

Uganda’s January elections saw Bobi Wine, a musician who gained political credibility and a loyal following through his pop career, challenge President Yoweri Museveni, who has been in power since 1986. Museveni ultimately kept his position- winning by with a 58.64% majority amid allegations from political agents (including by the US State Department) of the election being a fundamentally flawed process. It has since been described by Wine as an election ‘marred by fraud and violence’.

Bobi Wine, whose real name is Robert Kyagulanyi Ssentamu became popular in the Ugandan music scene in the early 2000s, topping the charts with reggae and afrobeat singles such as Funtula and Sunda. He’s also had leading roles in local Ugandan films.

His political career carries that same optimism and energy for a better future despite the trauma he’s endured as an opposition candidate.

During his career, Kyagulanyi has released more than 70 songs. Many of them carry a political message, encouraging people to stand up for their rights.  Time Bomb Corruption does this in a heavy-handed way, intense lyrics are set against an afrobeat and bouncing baseline:

Later in the song he cries:

He’s also commented on Coronavirus, a bold topic for a single, and tackled the issue with an infectious faith in humanity, encouraging people to do their part to stop the spread of the virus. His political career carries that same optimism and energy for a better future despite the trauma he’s endured as an opposition candidate.

Between announcing that he would run in the election in July 2020 as a candidate for the National Unity Party and voting day, Kyagulanyi was arrested twice by the Ugandan State, allegedly for breaches of Coronavirus restrictions.  The first of these arrests lead to protests where over 2000 people were arrested, several injured and according to Ugandan official statistics, 54 killed. However, other estimates have placed this figure much higher at around 100.

During the course of campaigning, Kyagulanyi’s own bodyguard, Francis Senteza, was killed by police when a military truck ran over him as he was helping a journalist who had been critically injured during earlier confrontations with the police.

Bobi Wine has managed to galvanise a generation who feel ignored and left behind, not with anger and bitterness but rather hope and rebellion.

Kyagulanyi has an innate ability to foster loyalty and admiration- a trait he’s carried over from his celebrity career, here used not to manipulate and spread fake news as we’ve seen in other countries, but rather to ignite political passions and assert the rights of the people who supported his music and then his journey into politics. In a world that’s increasingly focused on influencers and celebrity, it’s encouraging to see how global trends of populism and a rejection of the political establishment can be used to challenge injustice instead of perpetuating it.

His track Uganda explores the foundation of Ugandan democracy after independence in 1962. It’s celebratory, offbeat guitar chords and a bass that bounces around the lyrics. Wine is unashamedly patriotic, in a way that presents as genuine and optimistic. He talks about a new generation and the opportunities he wants to create. In Uganda, 78% of the population is classed as ‘youth’- between the ages of 12 and 35, but between 64 and 70% of those who are old enough to work in this age group are unemployed. Bobi Wine has managed to galvanise a generation who feel ignored and left behind, not with anger and bitterness but rather hope and rebellion.

As far as political campaigns go, this seems to be quite successful. Perhaps a grime track from Boris Johnson featuring Jorja Smith would help the bumbling Etonian overcome his latest controversy (deeply illegal scandal) and rebuild trust in the nation, or maybe that’s not something anyone wants to see.