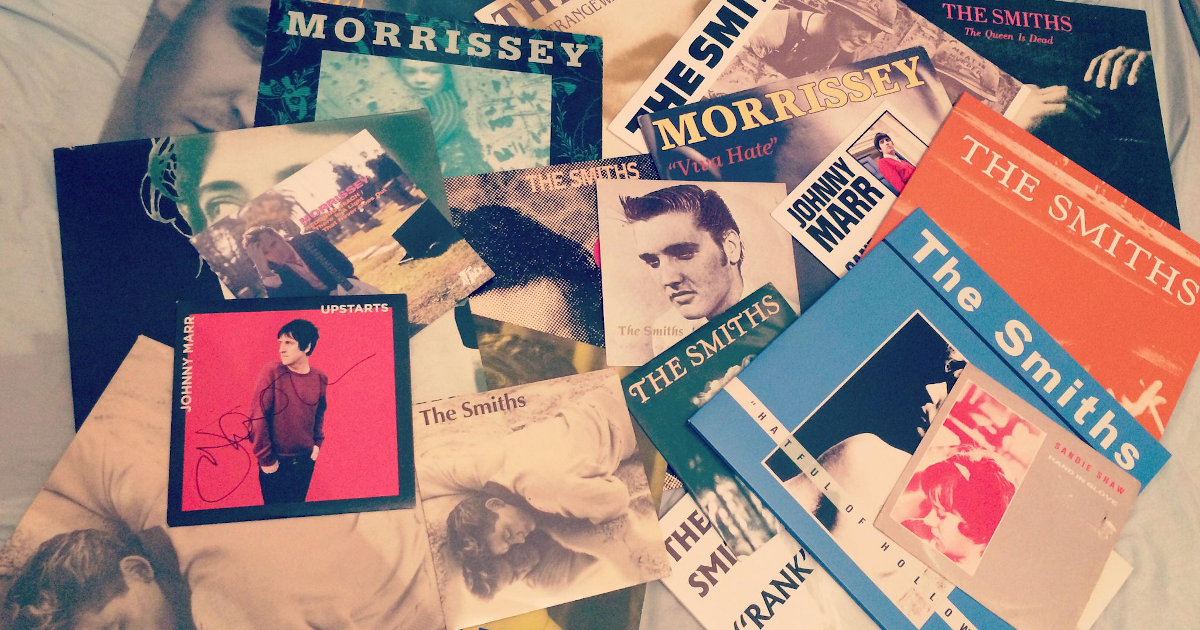 I was a teenage Smiths fan

Image description: many different Smiths albums scattered over each other

So I meet you at the cemetry [sic] gates

Keats and Yeats are on your side

While Wilde is on mine

A few months ago I was very unexpectedly (and very undeservingly) made captain of my college’s doomed University Challenge team. It was during our interview with the show’s producer when I mentioned what my dream round would be: “stills from old kitchen sink drama films from the 1960s and the cover art of the Smiths records which feature them”. I immediately paused in confusion; I hadn’t seriously listened to The Smiths (the seminal 1980s indie rock band from Manchester, fronted by singer-lyricist Morrissey) with any amount of serious devotion since I was about 15, yet here I was presenting them as if they were the focal point of my life’s interests.

The experience caused me to go back and reflect upon why my subconscious had refused to move on from my years of teenage wilderness. Indeed, Morrissey spoke to me in those days because, frankly, I fit most of the stereotypes of a typical Smiths fan. Manchester; glasses; vegetarianism; vaguely camp; dour disposition; more than a passing interest in the works of Oscar Wilde; wardrobe full of RSPCA charity shop rescues…

In particular, there was a transgressiveness for the time which is perhaps overshadowed these days by the numerous unfortunate pronouncements (which I shall refrain from repeating here) of latter-day Morrissey. His music and reference points therein opened up a world to me, – a historical guide through 20th century Western pop culture, specifically queer culture. I was exposed to not just the aforementioned patron saint Wilde, but also James Baldwin, Radclyffe Hall, Virginia Woolf, A E Housman, Joe Orton, but also Lou Reed (another figure whom one could make the case for being a flawed queer icon), Klaus Nomi and Candy Darling.

The last name on the list in particular warrants an interesting anecdote of its own: one Christmas I received the artwork of the 1987 single Sheila Take a Bow as a poster, which I promptly hung above my bed. Darling, an actress, transgender icon and star of Andy Warhol’s Factory, was the cover star and I thought she was just the most fascinating person I’d ever read about. The fact that I was uncovering a world of the 1960s New York underground via 1980s rainy Manchester was pretty fabulous.

So bona to vada, oh you

Your lovely eek and

That’s not to mention the queer undertones of ‘William, It Was Really Nothing’, ‘This Charming Man’, ‘Handsome Devil’, ‘Hand in Glove’ (which memorably had a naked bloke’s bum on the single sleeve art) and so on. One of the very first songs which Morrissey and Johnny Marr worked on together after meeting was a cover of The Cookies’ ‘I Want a Boy For My Birthday’ – need I say more? I specifically choose to emphasise the term ‘queer’ over, say ‘homosexual’ however, because such open-endedness was rather intentional. Many of the lyrics are gender-ambiguous, and whilst many of the cultural nods and affectations of old Mozzer’s were camp, they weren’t explicitly gay. Take, for instance, the 1990 solo single ‘Piccadilly Palare’ which features numerous lyrics in polari slang. For those who were clued into the strong link between polari and 1960s underground queer communities, it was warmly welcomed link that Morrissey was one of us. For heterosexual majority who were unaware that they were listening to a tale of a rent boy in Piccadilly Circus, it was just another oddball tune. He admits as much elsewhere in the song when he croons “you wouldn’t understand/ good sons like you / never do”.

Anyway, the point was that I was able to navigate a world of culture and intellect which had been refracted through the lens of a northern autodidact. It had the side effect of removing any whiff of middle class snobbery which could have otherwise stilted my burgeoning curiosity. In other words, I was liberated. One could be interesting, even intelligent (I daresay), without requiring a public school education and RP accent (at university I have found that the latter can also be true). You could come from a ‘rented room in Whalley Range’ (as both Mozzer and I did) and create something fascinating, articulate and subversive.

I was able to navigate a world of culture and intellect which had been refracted through the lens of a northern autodidact.

Throughout my teen years I was incredibly confused by most things (to be fair, this remains true), but particularly by myself. Yet I could find solace in Morrissey’s ambiguity; throughout his career he has been labelled by others as asexual, bisexual and pansexual, and although he has often appeared to be critical of the necessity for such labelling, in the 1980s he referred to himself as identifying with ‘the fourth gender’ (from what I can tell, he was exploring gender identity outside the binary, although I have not found much further elaboration by him on this statement) and in 2013 explained that he was ‘humasexual’: simply just attracted to other humans.

That’s the story of my life

Naturally, all this intrigued me; I had long felt rather detached from my peers and their conversations about boys and so forth, bemused by their attraction to the spotty-faced idiots at my school. However, I didn’t particularly feel at one with the few lesbians at my school either. I was somewhere in the vague middle, but too disinterested (scared) to bother with exploring what that could mean. I found solace in ambiguity and confusion, and nobody does adolescent angst like Morrissey.

Like him, I am Lancastrian via an immigrant heritage – he would be well served to remember his roots and perhaps offer a little more empathy to immigrants these days – and certainly my mixed background contributed to my sense of being an outsider, on top of everything else. As trite as it sounds in hindsight, I felt as if I could deeply relate to the inherent contradiction at the heart of The Smiths: being deeply intrigued by, and determined to write about the world around me, yet feeling like a perpetual outsider (as you do when you’re 15 and a precocious misanthropist).

I felt as if I could deeply relate to the inherent contradiction at the heart of The Smiths: being deeply intrigued by, and determined to write about the world around me, yet feeling like a perpetual outsider

But of course, one must contend with the reality of the public persona which the Morrissey of recent years has cultivated. It sounds silly to say anything along the lines suggesting that I feel betrayed by him. I would hardly say that anyone, let alone an ageing pop singer whom I will never meet, really owes anything to me, so I am more inclined to preoccupy myself with the potential impact on marginalised groups as a result of Morrissey’s proclamations. That being said, I do note the irony of the situation; the artist who encouraged me to perceive the world around me with greater depth and think for myself about issues, whether it be animal rights, the monarchy, or compulsory heterosexuality, has allied himself with bigots of the highest order.

In his records I found the space to find myself as a queer, socialist, second generation immigrant. Yet in recent years Morrissey has shown public support for the For Britain Movement, a fringe far right political party which was an offshoot of UKIP and attained the backing of Tommy Robinson, as well as several former BNP members and Holocaust deniers. In addition to the rampant xenophobia which is obviously prevalent in these groups, the movement’s leader, Anne Marie Waters, has made pronouncements decrying the “toxic ‘trans’ agenda”.

Whilst in the 1980s Morrissey may have been keen to explore radical…queer theory and iconography through his work, he now appears to be comfortable linking himself to the most conservative, traditionalist and reactionary people in politics.

Whilst in the 1980s Morrissey may have been keen to explore radical (for Thatcher’s Britain at least) queer theory and iconography through his work, he now appears to be comfortable linking himself to the most conservative, traditionalist and reactionary people in politics. Whilst he may love to champion the outsider, perhaps myself and countless other disenfranchised young people would not fit his ideal ‘outsider’ type these days. We certainly wouldn’t be welcomed by the ideological company he keeps.

So, what difference does it make?

But now you have gone

And your prejudice won’t keep you warm tonight

However regrettable it may be, Morrissey was my first, and perhaps most influential, queer icon. Out of a desire to not be a totally insufferable member of the human race as I embark on my adulthood, I have to accept it, assess the damage done to my personality and, hopefully, come to the conclusion that Mark E Smith and The Fall were better anyway.