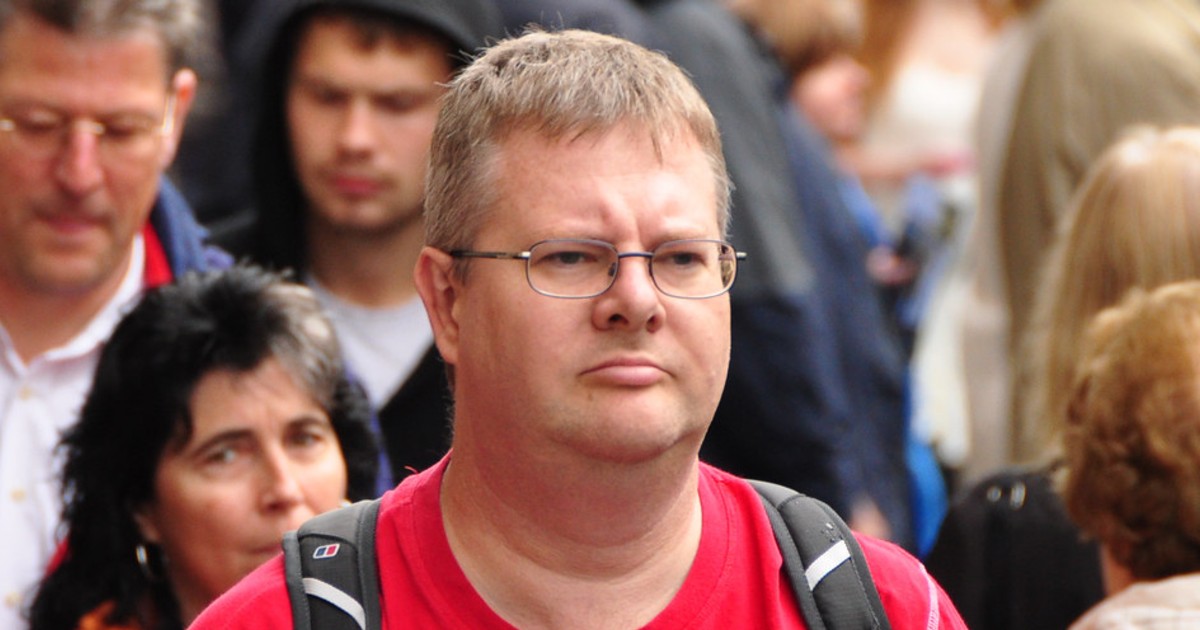 A Conversation with Average Alumni

Image Description: A white middle-aged man in a crowd of people.

This week’s alumni is Alan Allen, an accountant from Worthing who continues to describe himself as being in his ‘mid-to-late thirties’ despite turning 40 later this year. Allen graduated from Oxford in 2002 with a perfectly acceptable 2:2 in History, and now works as an accountant. Rordon Gamsay sat down with him to chat about this interesting career turnaround, his memories of Oxford, and the peculiar reason why he thinks students from Queen’s are ‘filthy knuckle-draggers with no principles’.

Hello, Alan. We’ve brought you here as part of our Conversations with Alumni series, so to start us off I thought I’d ask about your experiences at Oxford. What are your memories of your time here?

There are so many. In first year I remember getting so drunk I vomited all over the porter, and had to spend the next morning scrubbing his shoes whilst he played his Linkin Park CD in the next room. Apparently the scrubbing wasn’t punishment enough. That I would classify as a low point. Another low point would be my girlfriend at the time throwing all my clothes out of her bedroom window after an argument we’d had concerning her strange crush on the Gingerbread Man from Shrek. I had to gather my pants from around the quad for a demeaning half an hour later. A third low would probably be accidentally sharting during a tutorial and having to sit there for the next forty-five minutes in abject horror at the increasing soupiness of my underwear. So humiliation, shame, and fear are probably my principal memories of Oxford University. A series of increasingly low points, I’ve just realized.

It’s good to hear that little has changed over twenty years! But moving onto more contemporary pastures, how has your Oxford degree helped shape your life and career?

How then did you tackle finding a career after a degree, and what advice would you give to current students with similarly narrow opportunities?

Well, I never said my opportunities were ‘narrow’. I had an important placement come my way that I missed out on – but I don’t really want to talk about it.

All right, moving on –

Well, since you asked, it was in Trinity term of my final year when I learnt that the BBC were holding auditions for a new documentary presenter, and were scouting within Oxford. However, I had an exam at the given time and couldn’t attend the audition. But you know who did go? Jane Rosen from Queen’s, who was an absolute filthy knuckle-dragger with no principles, and she only went and got the bloody job.

I didn’t know her that well, but we’d taken a class together in second year. Once I picked her pen up off the floor after she happened to drop it, and she did not look me in the eye when she said thank you. I tell that story to everyone whenever she pops up on the TV – as she always does – to make sure they know her chirpy exterior is nothing but a facade veiling the depravity within. I’ll tell you, I laughed with glee when her oak cabinet collapsed on her head when she was a contestant on The Great British Celebrity Woodworking Winner. So if it weren’t for my exams, and her conniving ways, I could have been on the BBC. And Celebrity Pointless. And that stupid woodworking programme. But I’m completely over this now.

You currently work in accounting. Could you give us an idea of what your typical week involves?

My job is probably the least interesting part of my week. What really excites me is going to Sainsbury’s on an early Saturday morning and snatching up all the bargains before the plebs swarm in at 10. Some people prefer Tesco because of the Clubcard discounts, but those pale in comparison to the joys of the Nectar Card. Occasionally I visit Aldi, just to show that I’m still in touch with the common folk, despite my well-above the national average salary and semi-detached house in North London. I did an Ocado shop once, but the excitement of the neat van, the enormous array of organic produce, and the pre-sorted carrier bags was too much for me and I had to watch an episode of The Repair Shop to calm down.

Other than that, the week is full of fairly mundane activities. I mow the lawn, once, maybe five times a week, just to keep it looking its best. My neighbour, Simon – the nosy bastard – often makes snide comments about it, saying my stripes aren’t even enough. And I would like to take this interview as an opportunity to publicly say, fuck you, Simon. They are even. I see you creeping through the hedge at 2am to measure them with a metre rule. Stop bothering – they’re even! Do you have an Oxford degree? No? Then don’t judge my stripes, you cretin.

I have to say, going to Oxford has given me a really easy way to win any sort of argument, simply because people think you’re clever when you tell them you did. So no matter what Simon or Jane Rosen are doing now, I know in the pettiest way that I’ve won. And I bet they don’t have as many Nectar points as me either.

A lovely sentiment on which to end the interview. Alan Allen, thank you.

Do I get paid for doing this?

Then what was the point?

I ask myself that all the time.