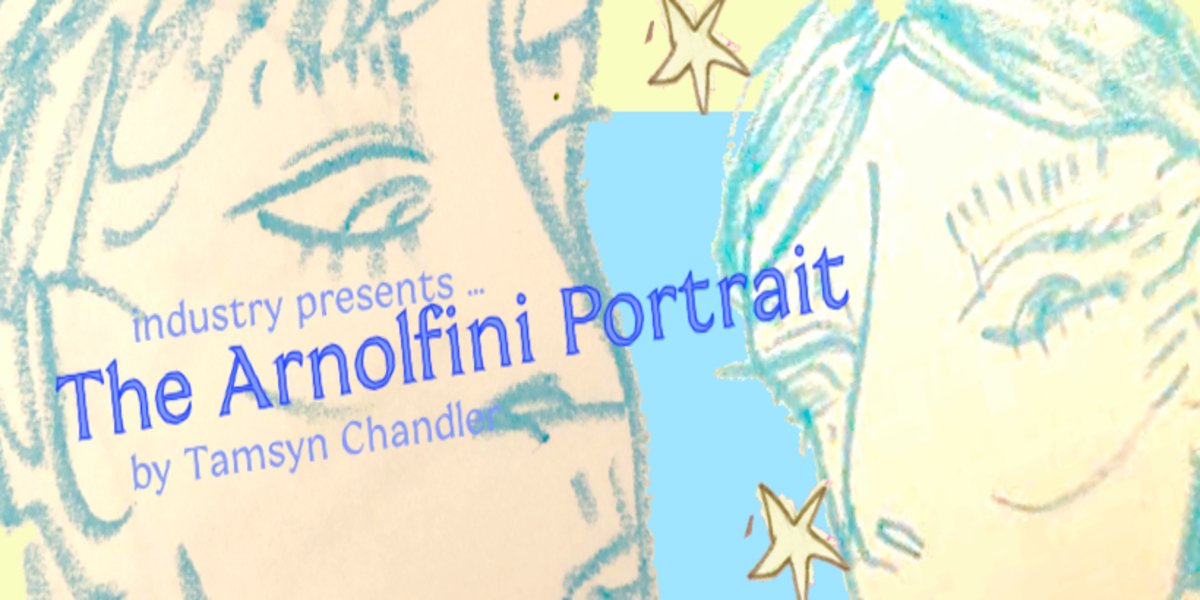 Image description: the promotional artwork for The Arnolfini Portrait (an illustration of two figures set against a pale blue background, with the play’s title in dark blue lettering)

With the absence of staging, lighting and costume among the many other elements which make up an understanding of theatre in the traditional sense, it could be questioned whether a radio play can truly provide an immersive and emotive experience. The Arnolfini Portrait, a piece of new writing created for audio by Tamsyn Chandler, confounds this wholeheartedly by inviting the listener to uncover a rich tapestry of memories of the past and fears for the future, all set within the walls of the protagonist Jean’s local art gallery.

Presented by The Industry Magazine Podcast, the play premiered on the evening of Monday 26th April and was accompanied by a video installation published on the Industry Sound YouTube channel, offering a unique multimedia dimension. With a four-person cast and at 45 minutes in length, this was a production that promised to offer an intimate listening experience.

Chandler’s script is a beautifully written, multisensory journey with multiple layers of depth and meaning. From W.H. Auden to Egon Schiele, the play makes abundant use of the arts to delve into a multifaceted exploration of memory and grief, drawing on poetry, paintings, videos and music. Whether in Bristol or Berlin, Chandler paints as convincing an image of the Arnolfini as they do the vibrant district of Neukölln and its bars with curtains of gold velvet.

Chandler’s script is a beautifully written, multisensory journey with multiple layers of depth and meaning.

The essence of remembering is another central focus, and light is skillfully cast on the relationship of memory to the senses and to location, drawing on the notion of home as far more than simply a physical place. Fragments of words once spoken intersperse with Jean’s storytelling – “It was hot that day, and why don’t we just get some orange juice and sit on the pavement…” – underscoring the pain of losing a loved one and the challenge of navigating the destabilising realm of grief. The writing is evocative and engrossing throughout, and confronts head-on the all-encompassing, quicksand nature of loss.

Grace de Souza, who also voiced V-Card’s Robin, plays the role of Jean with a tender vulnerability and delivers each line with poignancy. De Souza encapsulates the listener as Jean crosses paths with Alexander (James Newbery), a stranger who leads her through the various gallery exhibits and into a spiral of second-guesses and hallucination.

Alexander is an intriguing and complex figure. Ranging from surface-level small talk to psychological probing and evolving from callous indifference to an eventual, touching understanding of Jean’s grief and a desire to help, the multidimensional character is brought to life brilliantly by Newbery.

De Souza encapsulates the listener as Jean crosses paths with Alexander (James Newbery), a stranger who leads her through the various gallery exhibits and into a spiral of second-guesses and hallucination.

Enhanced only further by the accompanying visuals, sound was employed skilfully throughout, with effects such as the crashing of waves instantly asserting both the Harbourside location as well as the ideas of fluidity and transience which characterise the plot.

The motif of the gallery hotline not only added a further layer to the soundscape of the play but also served to increase the sense of entrapment and the inescapable as Jean is forced to face up to her past, with receptionist Kat Cooper maintaining a chilling detachment.

Ultimately, the play succeeds in encapsulating the empowering message of embracing life after loss. The Bristol arts centre becomes a beautiful metaphor for an archive of memories of young love, a motif that is tied together convincingly at the end. The play reminds the listener of the curative and immersive power of art, and of museums and galleries as a portal to another world – a sentiment rendered especially poignant by the imminent reopening of cultural institutions across the UK in the coming weeks.

The Bristol arts centre becomes a beautiful metaphor for an archive of memories of young love, a motif that is tied together convincingly at the end.

In all its eeriness and profundity, The Arnolfini Portrait carries an important message: only once we confront the deepest and most difficult of emotions do we allow ourselves to be set free. Enhanced all the more by its creative use of sound and accompanying video installation, Chandler’s production firmly draws the line between the mere writing of a play for audio and the multisensory curation of a world through a variety of artistic media.

The Arnolfini Portrait is available to listen to now via Spotify or Acast, with the accompanying video wall available to view here.