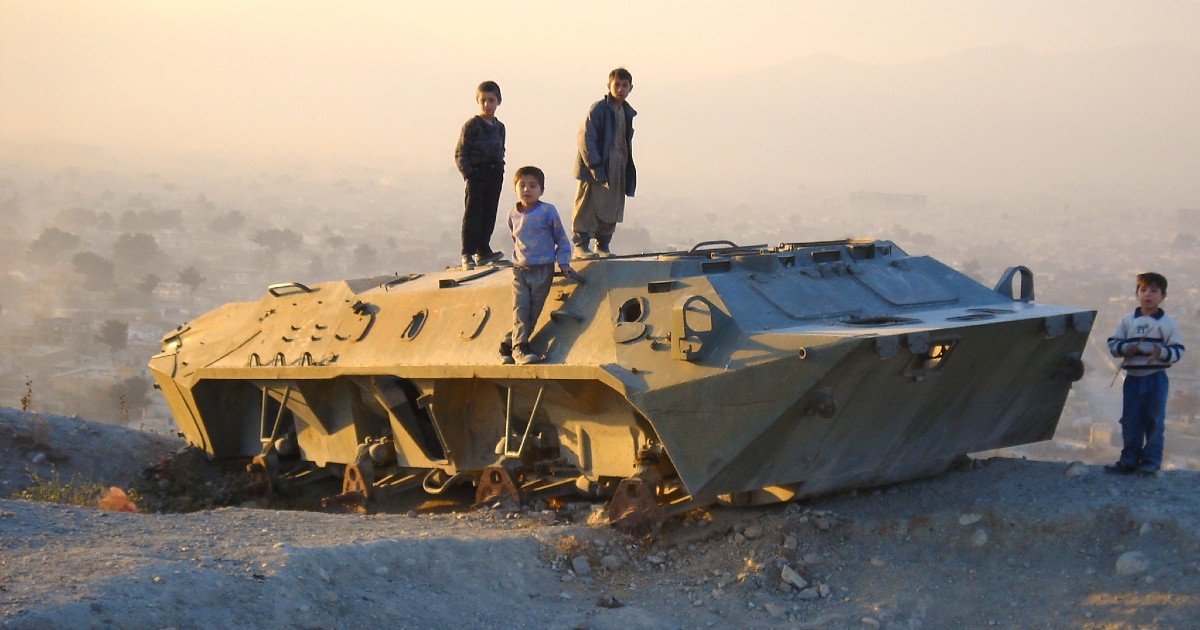 Image Description: outside Kabul, children play atop the carcass of a tank

“A war begun for no wise purpose, carried on with a strange mixture of easiness and timidity, brought to a close after suffering and disaster, without much glory attached either to the government which directed, or the great body of troops which wages. Not one benefit, political or military, was acquired with this war. Our eventual evacuation of the country resembled the retreat of an army defeated.”

This quote was not a criticism of the West’s recent disastrous twenty-year war in Afghanistan, but an indictment of the First Anglo-Afghan War by British army chaplain G.R. Gleig. Gleig’s words from one hundred and seventy-eight years ago show just how little has changed with regards to the Western imperial mindset. The military-industrial complex has consumed both American and Western foreign policy, and the resulting continued Western interventions in the Middle East are the definition of insanity—we are still making the exact same mistakes and strategic errors to a horrific human cost.

From the beginning, Western involvement in Afghanistan was the misguided result of a vindictive, overconfident state and a warmongering press. Less than two weeks after the 9/11 attacks, in which nineteen al-Qaeda hijackers were trained in Afghanistan, a CIA team was deployed the country and the US began a campaign of airstrikes to a chorus of jingoistic applause. The shamelessly titled ‘Operation Enduring Freedom’ saw U.S. and British forces quickly seize Kandahar—the home of the Taliban—by 6th December. As American military officials had anticipated, this had been a short-lived campaign, and Defence Secretary Donald Rumsfeld announced the conclusion of major combat operations by 1st May, 2003.

However, the Taliban resurged in 2005, modelling its tactics on those of Iraqi insurgents, such as suicide bombings and improvised explosives, and causing heavy civilian casualties. The expectations of an immediate victory, along the lines of the 1991 First Gulf War or ‘Operation Desert Storm’, proved to be a grave miscalculation. In the next sixteen years, President Bush’s words at the start of the Afghan war would become laden heavy with irony: “We will not falter, we will not fail. Peace and freedom will prevail…” The price of this ‘peace and freedom’ was immense. Afghan civilian casualties have numbered between 50,000 to 100,000, while the American military has lost 2,216 lives and over two trillion dollars—all of this, for ‘not one benefit, political or military’.

Since the Taliban’s 2005 resurgence, the West’s further entrenchment in this increasingly brutal conflict can be blamed on unclear objectives. The war was escalated under President Obama, who followed Lyndon B. Johnson’s Vietnam playbook by massively expanding the scope of US involvement in hopes of a decisive victory. In February 2009, the U.S. deployed a further 17,000 troops to add on to the 36,000 American troops and 32,000 NATO service soldiers. Yet this fundamental enlargement only muddled the campaign’s strategic direction, as demonstrated by Obama twice replacing his commanding generals. The incoherence of the Western campaign has not reduced the ferocity of violence, either. The final damning indictment of Obama’s leadership in Afghanistan is his highly controversial escalation of American drone strikes, despite his Administration’s insistence that such an expansion would not occur. So severe was the civilian cost of some these airstrikes that the Pakistani Peshawar High Court rule such attacks a war crime in violation of the Universal Declaration of Human Rights.

Western involvement in Afghanistan was the misguided result of a vindictive, overconfident state and a warmongering press.

Even with Biden’s recent pledge, questions remain over whether U.S. forces will ever fully leave Afghanistan. The president’s promise to remove the remaining 2500 troops in Afghanistan aligns him with his two predecessors who both made similar promises about ending the war. Barack Obama ran on a mixed campaign, hoping to expedite victory by escalating the Afghanistan campaign, but eventually announcing that all forces would be withdrawn by 2014. By the end of his term, however, he still left 9,800 US troops in the country. Likewise, Donald Trump made the termination of America’s wars a central tenet of his campaign, having voiced in typically blunt style his opposition to the conflict since as early as 2011. Yet despite all the bombast and noise, Trump too has failed to remove American military presence from the country. Given this history, Biden’s pledge of withdrawal seems worryingly similar to the unfulfilled promises of his predecessors—if even an isolationist President like Trump could not succeed, how can we believe that Biden will? Indeed, the September deadline for withdrawal is a shift from the previous deadline of May; the goalposts are already being moved.

On 17th January, 1961, in his final televised Address to the Nation, President Eisenhower warned against the military-industrial complex, explaining that “the potential for the disastrous rise of misplaced power exists and will persist”. The former Supreme Allied Commander of the Second World War could not have imagined just how much his fears came to be realized. An American government waging a war for twenty years despite consistent opposition from its elected officials and citizens; campaigns of illegal and brutal drone strikes concealed from the public and denied by officials; hundreds of thousands of civilians meaninglessly killed in the name of ‘peace and freedom’—it is a cliché to refer to Orwell nowadays, but this reference still seems particularly apt. In President Bush’s words: “When we talk about war, we’re really talking about peace.”

War is peace, and Orwell and Eisenhower are rolling in their graves.