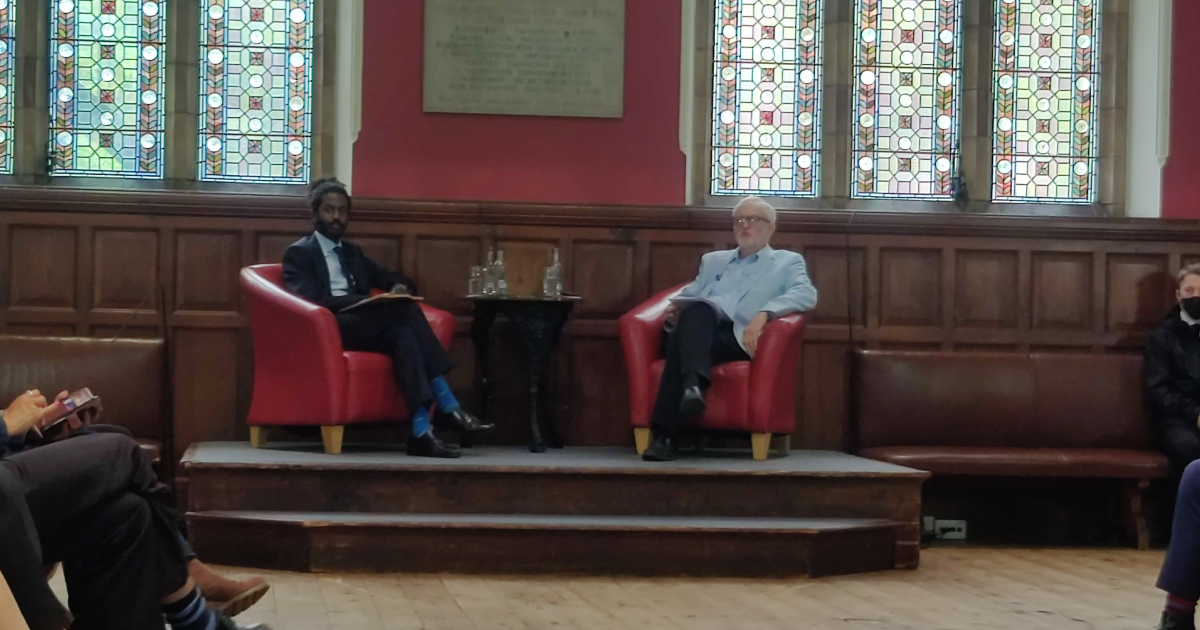 Guy Dabby-Joory reports on Jeremy Corbyn’s appearance at the Oxford Union, and The Oxford Student’s subsequent interview with the former Labour leader.

On the afternoon of 20th May, Jeremy Corbyn MP, the former Leader of the Opposition, came to speak at the Oxford Union. Mr Corbyn led the Labour Party from 2015 until 2020. His leadership of the Labour Party led to a trebling of membership and Labour’s highest vote share increase since the Second World War. Despite this, Corbyn lost elections in both 2017 and 2019, and preceded over an antisemitism crisis which resulted in an investigation by the Equality and Human Rights Commission.

It was Corbyn’s third time speaking at the Oxford Union, having previously spoken at debates arguing in favour both of the original Clause IV of the Labour Party’s constitution and of the merits of socialism. In his speech, Mr Corbyn focused on increased inequality both at home and around the world as a result of the Covid-19 pandemic.

He began by detailing the impact of the pandemic on young people in the UK, and he argued that it had exacerbated many pre-existing social and economic inequalities, as a result of years of austerity. Since the 2008 financial crisis, Corbyn observed that wealth had become more concentrated in the hands of a privileged few, with the rich getting richer and the poor poorer; Corbyn claimed that this trend had accelerated as a result of the pandemic.

Mr Corbyn then explained the impact of the climate crisis on global inequality. Recalling watching David Attenborough documentaries when he was a child, Corbyn stressed the importance of measures to address climate change and pollution, such as a Green New Deal, which formed part of Labour’s manifesto for the 2019 election. Corbyn concluded his speech by addressing insecurity, and what he viewed as the paradoxes of the Conservative government’s foreign policy, with a reduction in foreign aid accompanying an increase in defence spending. Corbyn argued that financial insecurity is overlooked by such a policy, which he claimed fails the world’s poorest and exacerbates inequality globally.

Corbyn then participated in a question-and-answer session with the Oxford Union’s president, Adam Roble. He was first asked about his record as Labour leader – Mr Corbyn responded by expressing his pride in the membership increase and the content of the party’s manifestos, but he explained that he regretted his party’s performance in the 2017 and 2019 elections. Aside from that however, Corbyn had “too few [regrets] to mention”.

Many of Corbyn’s answers to questions of antisemitism followed a similar form during the event, with his defences against these accusations often being accompanied with a fight against all forms of racism.

Roble next asked Corbyn two questions about his party’s antisemitism crisis. Mr Corbyn responded by arguing that antisemitism is a total evil within our society, which “must be challenged in every single form”, along with Islamophobia and other forms of racism and prejudice. Corbyn claimed that the attacks on his character by the media were unfounded and unfair, stating: “My life has been dedicated to fighting racism in any form, and I will die fighting racism in any form”. Many of Corbyn’s answers to questions of antisemitism followed a similar form during the event, with his defences against these accusations often being accompanied with a fight against all forms of racism.

In response to an audience question about possible improvements to schooling in the UK, Mr Corbyn advocated for a Finnish model of education, with a more universal and inclusive approach than is currently used. When asked about the present situation in Palestine, Corbyn argued that the UK should “unconditionally recognise the state of Palestine”, in order to help end the “occupation of the West Bank” and “siege of Gaza” which he claimed were responsible for the current violence. Furthermore, Corbyn called for an end to the selling of British weapons to Israel, in order to stop the UK’s complicity in the attacks on Gaza. Expressing dismay at both rocket attacks by Hamas and air strikes by the Israeli government, Corbyn advocated for peace for everyone in the region. Lastly, Corbyn argued that the future of the Labour Party must involve a greater sense of community consciousness, observing that people on the left write far more on what they disagree about than what they agree about.

After the event, The Oxford Student interviewed Mr Corbyn. We focused our questions on antisemitism, which dominated headlines for much of Corbyn’s leadership and had gone almost unmentioned throughout his speech. After his appearance at last week’s rally in support of Palestine in London, photos surfaced of Mr Corbyn standing very near an inflatable of a Gulf leader Mohammed Bin Zayed, with the inflatable caricature doctored so that its nose was elongated, and its eyes were red, along with horns on its head. Corbyn condemned this caricature, along with “all forms of antisemitism”.

However, he denied that he had spent time alongside antisemitic people such as Raed Salah, who has allegedly engaged in the antisemitic trope of blood libel. Mr Corbyn claimed: “I haven’t; I don’t” in response to this question but restated his condemnation of “antisemitism in every form”. Answering why many Jews perceived that he had engaged with antisemitism, Corbyn took the opportunity to “reach out to all communities”, and he argued that he had already met with Orthodox, Haredi, and socialist Jewish organisations to discuss matters of antisemitism.