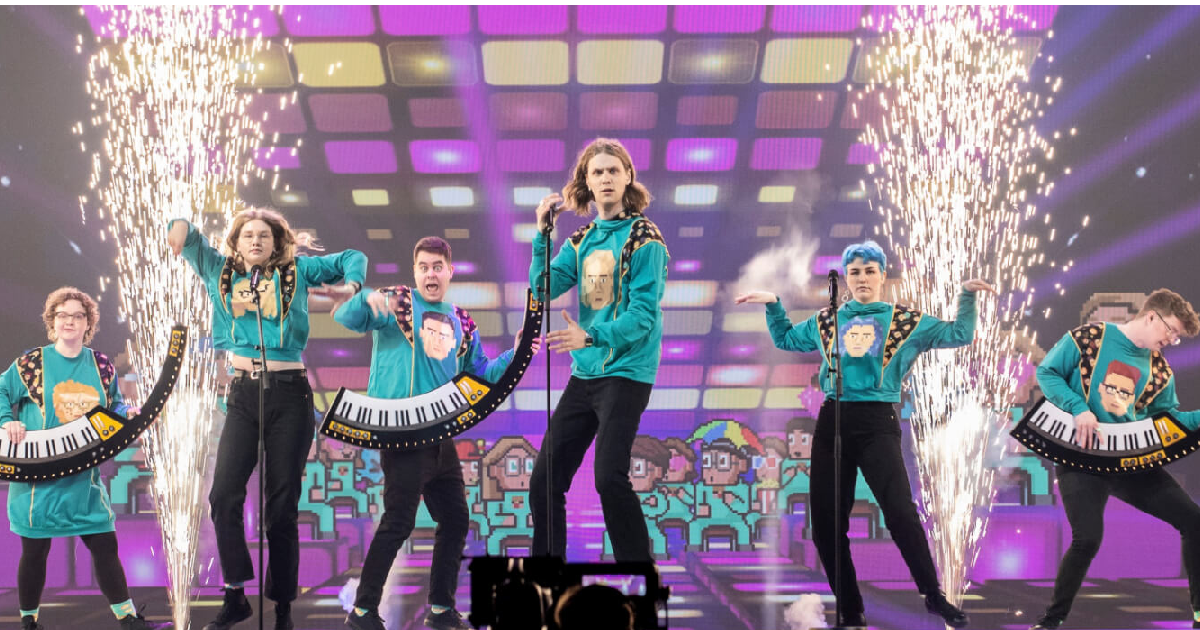 Image description: Daði & Gagnamagnið performing on stage with a purple and blue background and sparkling lights

Picture it now, and wipe a tear from your eye. Last year, Gay Christmas was cancelled. Due to go ahead in May 2020, the pandemic forced the 65th Eurovision Song Contest off our screens, and a microwave meal of clips from previous years was our consolation. Not so this year! Eurovision is back and arguably better than ever. With two years worth of budget left to splurge in Rotterdam, who are the acts to watch because they’re actually good (answer: not many)? And who should you watch in order to experience a weird Dutch fever dream? Regardless there will be love, love, peace, peace – so give it a watch this Saturday night!

I know what you’re thinking, reader. Hang on a second, isn’t that Destiny Chukunyere, famous winner of the 2015 Junior Eurovision Song Contest, 6th place runner up in the 2017 season of BGT, and winner of the second season of the Maltese version of The X Factor? And of course you’d be right, you absolute singing contest nerd / Wikipedia cheat (ring as appropriate). Channelling her inner Lizzo or Netta, depending on your level of cynicism, Destiny comes out swinging with a poppy tune about female empowerment. Lyrics include ‘Hell no, I am not your honey’, and ‘Yeah I’m too good to be true’. Similar songs were received well in 2018 (Israel) and 2019 (North Macedonia), so expect this to score highly. Any idea what ‘Je me casse’ actually means, though? Me neither. Excuse my French.

Look, they should (and would) have won last year. They’ve been robbed by Covid in 2020 and again this year! They’re not competing live due to one of their band testing positive. But that shouldn’t stop you adoring them just as much: ‘10 Years’ is nearly as big a bop as ‘Think about Things’. And sure, they don’t have as much of an ‘I-hate-my-life’ vibe anymore, but a feel good factor, a catchy tune, and some questionable dancing ensure their spot in the top 5. Those fresh outfits and keytars go a long way too. My personal favourite.

If Ukraine’s 2007 entry ‘Dancing Lasha Tumbai’ had a child with Farming Simulator, and took it to the Piers Gav. Go_A’s hypnotic EDM entry remixes a traditional Ukrainian spring ritual song into something that wouldn’t sound out of place in an East London warehouse rave. Rah, where’s my зеленесенькі? The staging is forest-y, the dancing is wild, and Go_A maintains a fantastic commitment to saying the Ukrainian for ‘sowing’ at least seventy five times. Coming out of nowhere in the semi-finals, this could pull off an upset win – their second in five years.

Cracking ballad, awful outfit, and some actual quite decent singing – what more could you want? If Malta channels Israel in 2018, this is the Netherlands’ 2019 winner ‘Arcade’ all over – sans piano. With a wild Tetris inspired set and a high note or two, this is one to watch, if only for the schaedenfreude if he can’t hit those notes on the night. There’s also a weird music video with a literal car crash, which I still don’t quite understand. Any insight would be much appreciated x

Yes, you read that correctly. Flo Rida. As in ‘blow my whistle’, ‘club can’t handle me right now’ Flo Rida. Yes, the ‘apple bottom jeans (jeans), boots with the fur’ Flo Rida. Why, you might ask, is multiple Grammy Award-nominated international pop star Flo Rida collaborating with a country which has less than 35,000 people in it? Who knows. But it’s classic Eurovision. Also the song bangs. Watch it. Enjoy it. And look forward to Jason Derulo competing with North Macedonia next year.

I have nothing to say about them but I do have a £3 bet placed for no reason other than it might be funny. If they win I make £1200. Actually scratch that I have a lot to say: they’re the single most talented group I’ve seen on Eurovision. It’s the best song ever, brilliant choreography, fantastic set. Please vote for them. Please vote, for my financial security if nothing else.

Ok, now this is proper Eurovision: Dolmio-flavoured Royal Blood. Fresh from winning the same Italian singing contest that Andrea Bocelli did years ago, this rock band – whose members have names like ‘Ethan Torchio’ will be sure to set your college bar alight – they genuinely sound quite good, with a solid rock vibe and cool sounding lyrics even if I’ve no idea what they’re actually saying. If that’s a surprise, it’s meant to be. Coming close to victory with Mahmood’s ‘Soldi’ a year or two back, if Italy win here it’ll be the first time since 1990. Even so, I still think I ordered Zitti e buoni at Franco Manca last night.

I’ve not done French past GCSE so all I can say about the lyrics is that there’s something about looking at Barbara Pravi, and saying voila a lot. The staging is really cool because there is none, and Pravi can certainly sing. It might, god help us all, be an actually good song, so I’m not too sure what it’s doing in Eurovision. At the time of writing France is one of the favourites to win, but we all know how well that always turns out (just watch a video of Sweden’s poor 2019 entry NOT winning). But it’s good, and probably has the jury vote on lock. Say ‘voila’ to the trophy?

To my Spotify followers I profusely apologise – I literally just listened to it, and the UK entry left so little an impact on my smooth, unridged brain that I had to listen to it again. Look, it’s not as bad as Electro Velvet, or Joe and Jake, but it’s no Blue or Lucie Jones. Christ, it’s not even Molly. If you understood any of that, you will also understand that the UK could have created a Covid vaccine to completely end the pandemic and we still wouldn’t reach the left side of the leader board. By the end of ‘Embers’, you’ll almost hope that there had been a stage invasion. Expect to see it playing on top of a Jet2holidays advert by the end of the year.