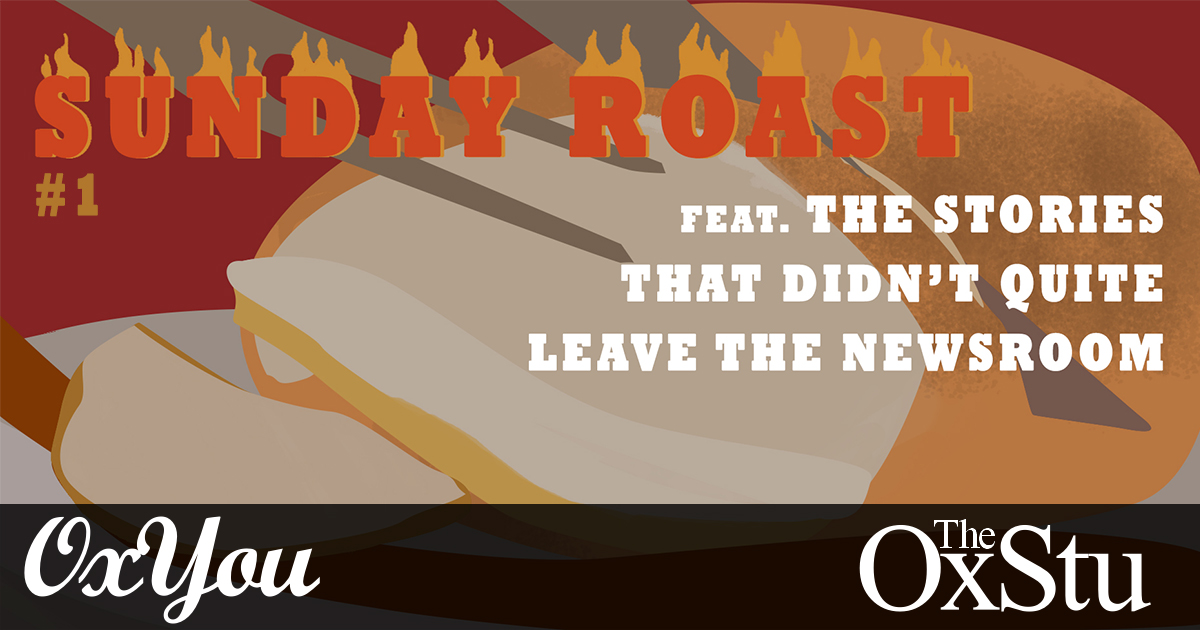 WOW: OXLOVE TO ME @ ME FOR WRITING THIS

Once again on zero sleep, Rordon remains dazed, confused, and dazed again. Too much work, too little sleep. And yet Rordon admits that he only does English – surely he should have the freedom to write smash hit articles all the time (shameless plug for the Eurovision Top 10 xoxo). And yet… he doesn’t. But then, do any of us have freedom? Is it not just an illusion? Are we not just puppets on the strings of fate, enduring Sunday Roast after Sunday Roast for no reason other than a higher power’s twisted idea of fun? Perhaps we — [Rordon, get some sleep. And maybe get thee to a Welfare Officer. – Dep Ed]

On opening up his Nokia, Rordon was confronted by a message far removed from the usual nonsense he receives from Jamie Oliver or Gordon Ramsay’s lawyers. ‘Oxlove to Rordon Gamsay @ OxStu, your pieces really make my day!!!’, it read. Rordon was shocked: did someone actually spell his name correctly?! Even his deputy editor couldn’t manage that. While he was somewhat upset that ‘OxStu’ wasn’t preceded by the definite article, he looked past the message, his phone, and onto the opposite wall that was getting blurrier by the second.

Not that Mr Gamsay was crying of course, only incredibly hungover. He blamed it on having to lay in the article ‘How to Project Your Life onto a Fictional Pseudonym’ at 8am in the SU the previous day, before serving all the food at the college marriage ceremonies – lamb sauce with lamb. Drunk and disorderly conduct ensued, and Rordon can only vaguely remember failing the captcha to submit the above Oxlove three or four times. Oh well, an Oxlove’s an Oxlove no matter who sent it: now to indirectly beef the Cherwell on Oxfess again…

Following riots in the marquee on Saturday night when Iceland didn’t win Eurovision, the President of St John’s College made the difficult decision to shut down the college bar and turn it into a daytime nursery. ‘It’s literally the only thing we could do’, the email read, ‘there really was no other way to punish the four students who were upset. Plus, Italy deserved to win anyway.’ Students were invited to do a different kind of bar ‘crawl’, one which involved warm milk, a small cookie, and a selection of pacifiers to stop the screaming.

‘Goo goo ga ga’, said John’s second year Teresa Thatcher de Yannickson before spitting out their dummy. ‘Last time I had one of those was at the Piers Gav. It’s just not quite the same, but I am glad to see the senior management’s commitment to treating us like children. Turns out it’s not just babies who can sh*t the bed’. Even so, Rordon Gamsay has it on good authority that the showing of ‘Paw Patrol: Ready, Race, Rescue!’ still went down a storm, with music played including the entire selection of Cocomelon Youtube videos, and Germany’s 2021 Eurovision entry.

On Monday new government guidelines allowed students to eat and drink indoors, host larger outdoor gatherings, and even hug each other for the first time in months. However, this easing of restrictions has not been without its difficulties. Gamsay spoke to one student who had a traumatic experience greeting a friend she had not seen since before the lockdown. “I completely panicked when we met,” she confessed. “When he reached out his arms to hug me, some fight-or-flight instinct kicked in, and instead of hugging him back I ended up roundhouse-kicking him in the face. That’s how out of practise I am socially.” Further questioning from Gamsay revealed that this hug-averse interviewee was in fact a Merton student, rendering the incident slightly less surprising as a result.

Others used the new rules on group gatherings to revive crewdates, which had been difficult to host under the previous restrictions. One St Peter’s rower interviewed outside the Slug and Lettuce at 1am last Thursday had this to say about their experience: “‘Ish great….. Ish great…. Shorry mate…. I’m a pit bisshed.”