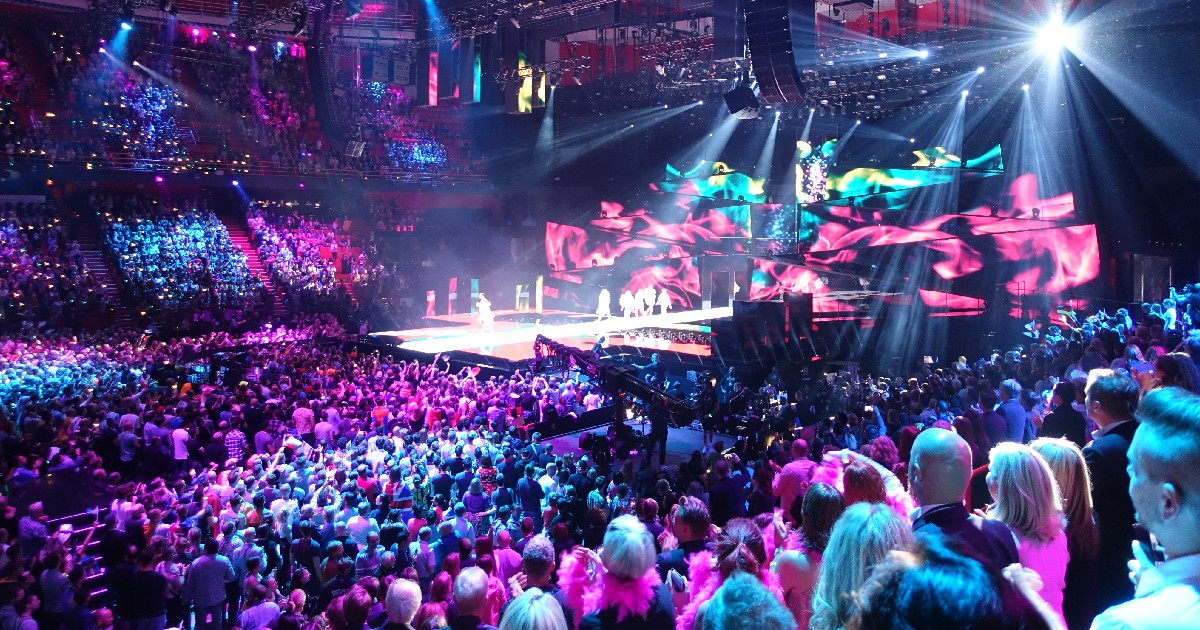 Image description: Eurovision crowds in purple and turquoise lighting turned to a stage with a spotlight

Following Saturday’s Grand Final, another Eurovision has come and gone. In what felt like the quickest grand final in recent memory, 26 countries competed for the glass microphone trophy, with Italy pulling up ahead of the jury-favourites Switzerland and France after the public vote. One of the strongest grand finals in recent history, the night was dominated by singers in silver-tasselled body suits (I counted four!), predictable key changes, and absolute tunes. Here is a review.

The winner, Italy, gave an exciting performance with the coolest song and style in the competition, standing out in the best way. Frontrunner Switzerland gave a beautiful vocal performance, and was an incredibly engaging – difficult to pull-off in a ballad. The song is great as well, on a par with the slow ballad winners of the recent past, receiving the most jury votes.

The bookies favourite Voilà surpassed Switzerland, making the other French ballad in the competition, France, the runner up. The song was absolutely beautiful, so was the performance with really cool camera effects, and many of my friends wished for it to win. Still, I felt like it lacked a certain edge that Eurovision winners usually have.

There was only one song that placed worse than that monstrosity, which was by the UK. Poor James Newman placed last with a whopping zero points, and I must say, with Germany right there, he did not deserve to.

In a shocking turn of events, Cyprus and Greece gave each other 12’s again, bringing forth the question of just how music-focused the jury are. Cyprus entered the contest with El Diablo, a knock-off Fuego in hopes of matching its success in 2019, which sadly did not live up to the challenge. Perhaps sounding closer to the studio version, or not going first in the competition, would improve Cyprus’ placement, which was 16th.

Flo Rida was there! With a feature rap verse shoe-horned in to benefit from the leftover crumbs of his relevance, San Marino sadly had to see that those crumbs were not even there, and they came in 22nd. Adrenalina was incredibly catchy so their low placement remains the most surprising result to me. Senhit looked shocked, and my face mirrored hers in front of the screen.

As the favourites to win last year’s cancelled contest, Iceland’s run of bad luck continued in 2021 – they could not perform live, due to one of the band members testing positive. Amazingly though, this did not hurt their chances at all. They placed 4th overall with the incredibly charming performance of 10 years aired from the rehearsal footage.

Finland continued with their pattern of hard-rock entries, and for good reason: They came in 6th with Dark Side, asking for “middle fingers up!” and making the crowd come alive. They had the misfortune of being in the same year as Italy, and the good fortune of performing right after Germany. Germany’s song, the absolutely tragic “I Don’t Feel Hate” that belongs in a Phineas and Ferb episode (with sincere apologies to Phineas and Ferb), made me glad they don’t feel the hate, because they got a lot of it, finishing the competition second to last with just 3 points.

There was only one song that placed worse than that monstrosity, which was by the UK. Poor James Newman placed last with a whopping zero points, and I must say, with Germany right there, he did not deserve to. I thought Embers was an above average pop song, with a generic sax break that could get radio play. Alas, while it was not actively bad in the studio version, the live performance was not great; the staging was unimaginative and boring, and whichever stylist picked that coat for the performance should be fired.

All in all, it was Eurovision! The familiarity of this annual night with all of its clichés is the reason it’s still popular.

Many countries sent in similar electronic tracks, sung by women in similar costumes, doing similar choreography (Cyprus and Albania going after one another did not help either country, for this reason). Although most were good, it seems as though they cancelled each other out, none of them making the top 5. Malta stood out amongst them with impressive vocals, with an admittedly derivative song that evoked Megan Trainor and Lizzo, placing 7th.

Some honourable mentions: Ukraine (5th) stood out because it was unique and catchy, if not a bit repetitive. Azerbaijan (20th) deserved so much better, with great choreography, and a catchy chorus that has been playing in my head in a loop since Saturday. Lithuania (8th) was fun, and proved how choreography and costuming can elevate an above-average song into a bop.

All in all, it was Eurovision! The familiarity of this annual night with all of its clichés is the reason it’s still popular. But it gets a bit repetitive, when most entries are indistinguishable EDM-influenced generic tracks OR a copy of the last winner. That is why it felt like a breath of fresh air when the winner was Italy, bringing a rock banger with a captivating attitude, great live vocals, and 70’s glam rock inspired costumes. It was my favourite, but I thought it did not have a chance of winning. I’m so happy to be wrong! If there is one song from this article you should listen to, it is this one.

In conclusion, this was a good year to tune-in. I cannot wait for the abundance of rock bands to mimic what Italy did. Seeing as the past few winners have been, in chronological order, upbeat pop, slow ballad, and now rock; I predict another catchy pop tune to stand out amongst what I’m sure will be a lot of pop-rock next year.

Now, excuse me while I go listen to Zitti e buoni again. What a song. What a year.