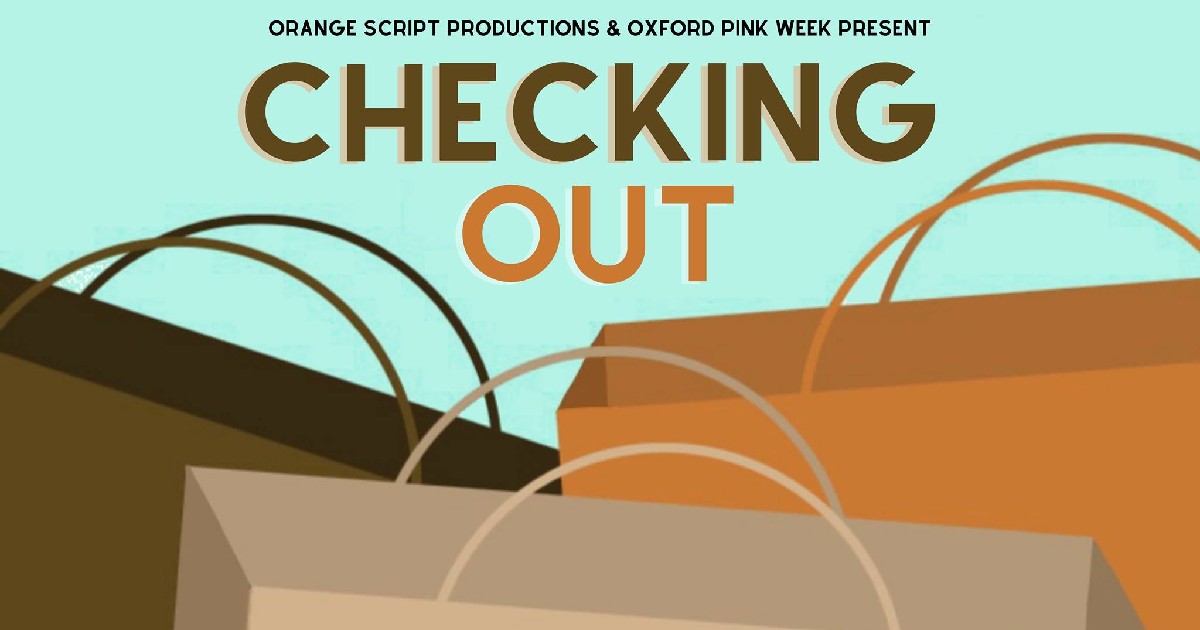 Image description: Paper shopping bags against mint background with the title ‘Checking out’ above.

Checking Out produced by Orange Script Production and written by William Heath is styled as a ‘comedy-drama which follows the beginnings of the unlikely relationship between larger-than-life, mid-forties shop assistant Julie and recently-widowed octogenarian Elsie’. It is, however something much more than that. It is a tale of repressed sexual desires, and failed and broken relationships. But it’s also a show about real love, and realistic love; the betrayal and heartbreak and then the rebuilding, limping on, having taped yourselves back together like Frankenstein’s monster. It is a story underpinned of course with the irrevocable intimacy of knowing everything about the other; as Elsie notes ‘even the mole on his thigh’.

The cast, minimal but magnetic starring Vicky Stone as Julie, Leah Aspden as Elsie, and Nathaniel Jones as Eddie, give excellent performances with intense emotional nuance. The entire atmosphere and aesthetic of the piece is reminiscent of Victoria Wood’s dry humour and Alan Benet’s heart-breaking droll monologues; an admission of the sad realities of normal life. The kitchen sink grittiness of their work is mirrored in the set, costumes, and location of post-industrial Lancashire transposed to the modern day. In short, it felt like three real people delivering their heartbreak to you before your very eyes on a silver platter. At times an uncomfortable experience but throughout a joy to behold.

Vicky Stone as Julie was excellent, opening the play with a tone of the village gossip as she put away clothes that had been drying on the line. The dry humour was delivered very well, with a glint in her eye and I was immediately drawn into the personable characters. Stone’s acting outshone the set, which unfortunately felt stilted and too old fashioned with a teapot, teacups, and saucers jarring with the mention of photos shown on smart phones. It seemed as though directors Alex Abrahams and William Heath were trying too hard to be reminiscent of a Lancashire possibly sixty years ago rather than taking the spirit and placing it in the modern day. Nonetheless the realism of the day to day struggles of being late for work, or helping the elderly neighbour with the shopping were portrayed with such skill I felt as though I were there.

The cast, minimal but magnetic starring Vicky Stone as Julie, Leah Aspden as Elsie, and Nathaniel Jones as Eddie, give excellent performances with intense emotional nuance.

Nathaniel Jones as Eddie was also excellent in the 1960s flashbacks of the sexually secretive world of post-war Britain. Jones very much came across as a man head over heals in love and as the story unfolded and the betrayal and sense of loss became clear, Jones’ performance incrementally built to some heart-breaking lines. Difficult yet joyful to watch, Jones walked the fine line between the emotional turmoil of selfish love and the guilt of knowingly betraying another. Whilst his Lancashire accent was a little patchy at times, he more than made up for it in the nimbleness of his emotional transformation.

The play focuses mainly on the physical presence of Julie (Stone) and Eddie (Jones) using both as a medium through which to present and explore Elsie’s life. Elsie (Leah Aspen) was quietly brilliant.  She was spot on in her depiction of the tired, old widow, exhausted with life. Her matter of fact delivery was like the representation of an entire generation and it was as though I were in conversation with my own grandparents. The untold disappointments and heartaches rippled through the screen. Aspen was particularly compelling in her attempt to come to terms with the multiplicity of late life shock; her husband’s death, his queer identity but also an overriding hope that despite their own losses, a stillborn baby, he was happy.

The acting throughout was phenomenal but the music at times felt misplaced and unnecessary. Its attempt to guide the audiences’ emotion was needless as the storyline and acting did that perfectly.  The occasional use of overlays was a little hit and miss. The overlays of Jackie and Elsie were distracting and made it difficult to concentrate on the emotional themes being offered up. However, later attempts were brilliantly done, especially the overlays of Eddie writing his diary entries as Julie read them out. The use of stills of Elsie’s kitchen; her potted plants, gardening gloves and other miscellaneous items was a stroke of directorial genius reminding you of the domestic stability about to be rocked by new revelations.

Overall, Checking Out was an excellent piece of theatre and tapped into the age old themes of repressed sexuality, relationships, and love which pepper the work of other Northern writing powerhouses in Victoria Wood and Alan Benet’s Talking Heads. The ultimate lesson being, ‘Life passes. Love remains’. A true pleasure to watch.