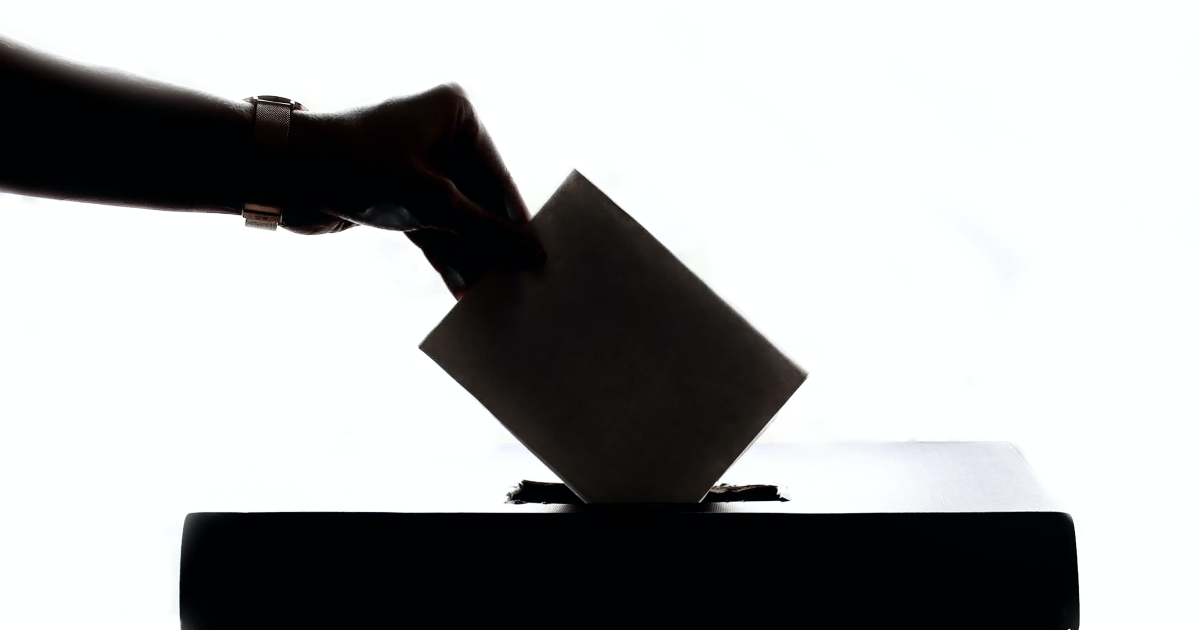 Image Description: black silhouette of a hand with a watch placing a vote in a ballot box against a white background.

The 1928 Equal Franchise Act gave the vote to women over the age of 21, placing them on equal terms to men for the first time in British history. Though the voting age was lowered to 18 by legislation in 1969, universal adult suffrage is at the foundation of British democracy – and indeed any healthy democracy. People of all genders, all ethnicities and all backgrounds are entitled to a say in the governing of the country. Plans to introduce mandatory photographic identification at polling stations therefore represent an attack on this principle and ultimately an attack on our democracy.

In justifying this move, Health Secretary Matt Hancock highlighted the miniscule issue of voter fraud, claiming that the 6 reported cases at the last election were “too many.” It is clear – painfully so – that these plans are not about voter fraud. Rather, introducing identification in order to vote seems clearly designed to disenfranchise and deter specific constituencies of voters.

It is estimated that around 3.5 million people currently do not have suitable photographic ID that would allow them their say in an election. Further, the barriers to acquiring such ID are significant. In a number of countries requiring voter ID at polling stations, a low-cost or free method of identification is typically offered to those who do not hold things like passports or driver’s licenses. However, in the UK no such option is available and so the 3.5 million lacking suitable documentation would be required to spend the £85 to get a paper passport or the £43 to get a provisional driving license.

Such measures have therefore been criticised for disproportionately targeting people from poorer and marginalised communities. LGBTQI+ organisations, homelessness charities and campaigners from a range of other communities have voiced their fears that these plans would disproportionately target particular sections of society. This incidentally includes ethnic minority communities, who are more likely to vote Labour, and members of the working classes, who also traditionally and largely have continued to vote Labour (though class dealignment has been noted over the past few years). It has been reported that 47% of the UK’s Black population do not have a driving license, compared to only 26% of white people, underlining how one constituency, which overwhelmingly typically leans to the political left, would be unduly disadvantaged. A pattern thus emerges of these measures disproportionately affecting voter constituencies more likely to vote Labour and, through the requirement of photographic ID, effectively bars those who cannot access or afford to make this purchase from having their say.

Disenfranchising people on the basis of wealth and privilege is nothing new in British history. The 1832 Reform Act limited suffrage to householders or those paying a yearly rent worth £10, whilst the 1918 Representation of the People Act, which was and is heralded as a milestone in the fight for women’s rights, extended the franchise only to women who met certain property and wealth requirements. The introduction of photo ID at polling stations could therefore end up discreetly setting British democracy back decades, or more.

Plans to introduce compulsory photographic ID at polling stations ultimately and paradoxically connect democracy with privilege. It is clear that being able to purchase photographic ID is inaccessible for a number of communities and no purchases should be required to participate in the electoral process. The Conservatives evidently do not care about electoral fraud, but are taking this opportunity to narrow the franchise and attack the fundamental principles behind democracy. They must be urgently and firmly opposed, or else we risk turning the clocks back and restricting our democracy.

Voter ID is nothing new. Opponents of the new bill to prevent voter fraud are painting a doomsday scenario and lamenting the death of democracy. But, the reality is that requiring voter ID merely brings Britain in line with many Western liberal democracies, which have been practicing this for a long time.

Many countries around the world require voter ID to verify one’s identity before being allowed to vote. In Canada, one of the comparatively liberal democracies, voters have to prove their ID at the polling station. In France, Sweden, the Netherlands and many more countries, photographic ID is needed on top of voter registration forms for individuals to vote. For somewhere closer to home, even voters in Northern Ireland have been required to present voter ID since 2003.

In contrast, the UK is in the minority of countries that don’t implement this. As of now, voters only need to give their name and address to be allowed to vote on polling day. The Conservative government argues that this allows the opportunity for electoral fraud, and that this new voter ID legislation will “strengthen the integrity of UK elections and protect our democracy from fraud and intimidation.” On top of requiring voter ID on polling day, this bill also tackles three other issues: postal votes, undue influence and proxy voting, which allows close relatives to vote on behalf of individuals. For postal votes, they have banned party campaigners from handling postal votes altogether, limited the number of postal votes any one person may hand in on behalf of others, and extended secrecy provisions. For proxy voting, they government has limited the total number of people for whom someone can act as a proxy to four.

Chloe Smith, Minister for the Constitution and Devolution, states that “stealing someone’s vote is stealing their voice. We must go further to protect and modernise our precious democracy. Our robust package of measures will stamp out the space for such damage to take place in our elections again and give the public confidence that their vote is theirs and theirs alone – no matter how they choose to cast it.” The package of measures are designed to support exactly these aims in a proportionate manner.

Critics argue this will disenfranchise many individuals and prevent them from voting, especially for minorities and young people. However, data demonstrates otherwise. Research from the government showed that 99% of ethnic minorities had a form of identification that would be accepted under the government’s proposals, as did 98% of people who identify as white. 99% of 18-29 year olds hold the relevant identification, as do 98% of those aged 70 and above. Some individuals might indeed be unable to vote after this bill, but it is likely to be a very small minority, and there are provisions in place that make it very easy for eligible voters to become verified.

Ultimately, despite all the fearmongering, requiring voters to present voter ID on polling day is nothing more than a “proportionate, reasonable response” to tackle voter fraud and other electoral problems. This bill merely brings the UK in line with most other liberal democracies around the world.