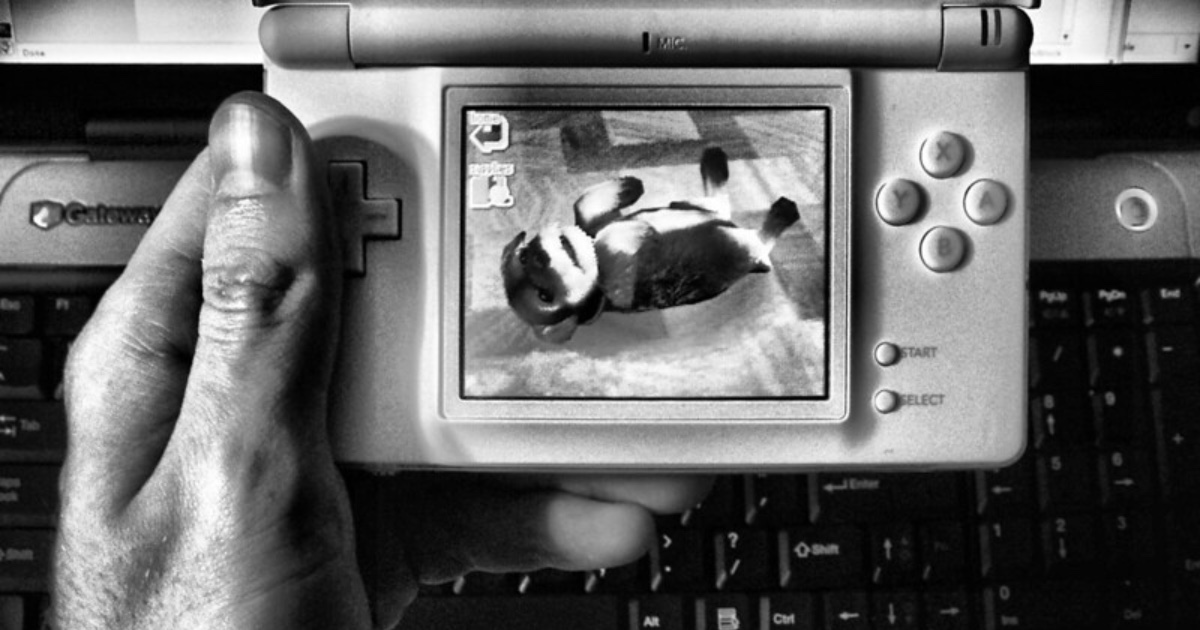 In memory of Nintendogs

Image description: A black and white photo of the bottom half of a Nintendo DS, a dog is lying down on the screen

When I was younger, I was an expert owner of virtual pets, from Tamagotchis to Moshi Monsters. But the best game of them all was always Nintendogs.

Looking back on it, Nintendogs is a game that isn’t realistic in any way. You can leave dogs indefinitely in the vaguely named ‘Dog Hotel’, swapping them in and out as you see fit without charge. You can even ‘Donate a Dog’ to the ‘Dog Hotel’ and  get rid of it permanently. I have definitely ‘donated’ my fair share of dogs over the years,  sometimes regretting the fact that they were gone forever. Apparently, the dogs can run away if you leave them for too long, but I have left my game unopened for over a year before and, when checking out of curiosity, the dogs are very much still there.

Looking back on it, it feels almost ridiculous how much time I must have poured into a game which doesn’t really have any sort of plot

My favourite dog was always a cream-coloured Shiba Inu called ‘Rex’. Rex came well trained as he had already been played by another user. As a result, he was able to go on longer walks and win competitions more easily than the others. While other dogs festered in the Dog Hotel for months on end, I took Rex on walks in the park to train for Disc Tournaments, and to the gymnasium to train for the Agility Trials. Rex was a competition winning machine. I knew if I played a competition with him, he would win.

Looking back on it, it feels almost ridiculous how much time I must have poured a game which doesn’t really have any sort of plot or real progression after you reach the Championship level contests. It’s repetitive, as you are trapped in an endless cycle of feeding, washing, walki ng and training your dog and entering them into competitions. The multiplayer aspect of the game isn’t really much fun, as all you can really do is ‘meet’ another player on a walk and send them a present or message.

I was so invested in Nintendogs that when I lost my copy, I bought a second one so I could keep playing (I did eventually find my first copy again). I also owned Purr Pals, which is essentially like Nintendogs but with cats and slightly questionable graphics, and Imagine: Pet Vet, which is exactly what it sounds like. It was all about the fantasy of it – I obviously couldn’t own multiple competition winning dogs, enter cats in shows, and run a vet clinic, but with my DS I could have any pet that I wanted, without any of the actual physical effort. I don’t think any of the other pet themed games could really stand up to Nintendogs. I remember that Purr Pals always felt less fun: it didn’t look as polished and you could only ever own one cat at a time. The aim of the game –  entering cats in shows – just wasn’t as fun as the Nintendogs contests. While Nintendogs has not aged too badly, Purr Pals looks ancient. The cats in the game aren’t even remotely cute, and the sub-par design – which impacts everything from the fonts to the backgrounds – makes it a hard game to enjoy even for nostalgia’s sake.

As an adult, I think the lack of realism in Nintendogs is the thing I now notice most. The puppies never age, never get sick, never die, and sometimes don’t even slightly resemble the breed they are supposed to be! When I was younger, I never really paid this much thought but now it is more apparent to me just how unrealistic the game is. The competitions were once my favourite part of the game. Though the actual minigames in the competitions are still fun, as I got older I became increasingly aware of how annoying the presenters are. Archie Hubbs and Ted Rumsworth somehow manage to be two of the worst NPCs I’ve ever seen in a game despite their relatively small role. I didn’t really notice this as a child, but now I think it would be a challenge for anyone who is no longer the target age for Nintendogs not to get frustrated with their awfully repetitive jokes and banter, especially because their dialogue is pretty much the same when you play more than one contest.

Despite all the obvious issues, I still look back on Nintendogs fondly, and I do still sometimes go on the game for nostalgia’s sake

Despite all the obvious issues, I still look back on Nintendogs fondly, and I do still sometimes go on the game for nostalgia’s sake. The things that annoy me about it now are because I’m just too old for it. Compared to other virtual pet games, Nintendogs was definitely one of the best. I wish I could go back to those times when I could spend hours and hours playing it.

Image credit: “nintendogs at night [DILO]” by striatic is licensed under CC BY 2.0