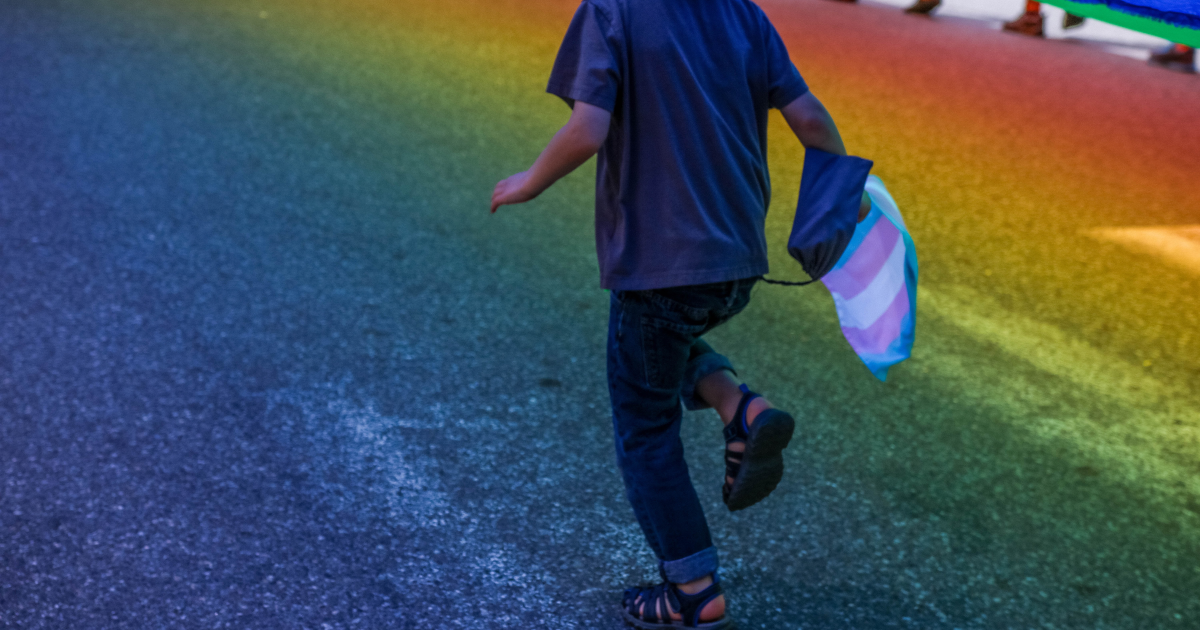 Misgendering and the struggles of my internalised transphobia

Image description: a child running with a trans flag with the ground illuminated in rainbow colours

Disclaimer: this article is written entirely from a binary trans personal perspective. The feelings talked about, whilst possibly shared among multiple binary trans individuals, do not represent how every trans people feels and definitely is not how one should actually think of one’s gender. It also may not be relevant for the non-binary experience for which I cannot speak for.

There was an interesting incident that happened over the Easter break that got me thinking about my own sense of “trans-ness”. Living in near-central London when not in college, I decided one evening to order click & collect at my local Franco Manca, and so, having walked over at the time I chose, wearing, as I do, my regular outfit (that being, to let you know, an androgynous combo of high waisted jeans with a low-cut buttoned up shirt and all the few bits of jewellery I own), standing outside waiting for my pizza, as I do, with my mask on, the waiter walked out the door and pleasantly surprised me by saying “Hello madame”.

The fact that this surprised me is a whole conversation unto itself, but what came after – me saying “hey” back in my lower-than-the-average-women’s-but-still-not-really-masculine voice, prompting the waiter to then stumble and say “oh, sir” – is the real crux of the reason for my continuous pondering about this incident, because of it having sparked a shift in my mood for the rest of the evening. This shift, however, is not for the reason one may assume.

‘Misgendering’, as it has been labelled by the trans community and others alike, has always been a strange term to me, but that’s much more to do with me than it is to do with the word itself. It may come as a surprise to some, but after a stressful and unnecessarily elongated 5-year-long coming out because of various peoples’ transphobia, what may be called a rather less than desired uncertainty around my identity has been fundamentally instilled into me.

That is not to say I do not wholly consider myself a woman, but the subtleties of a cisnormativity-induced internalised transphobia causes somewhat of an Orwellian ‘doublethink’ in terms of my own sense of self, and that is where my unease around the term ‘misgendering’ lies. I am both a woman and not a woman at the same time. When someone misgenders me, therefore, part of me is offended and upset, and the other part just reflects “fair enough”, and doesn’t think of it as a misgender, but as an understandable gaffe given my appearance.

I am, however, not saying that this view of the term, or the action, is correct, that is not the point I wish to be taken from this article. These types of daily misgendering as described in the aforementioned incident have led my thoughts to this question around the subtleties of my own internalised transphobia, and how or if I could ever defeat it. As I walk about college, and Oxford and London in general, and I hear the porters, or tutors, or other undergraduates, or even baristas, refer to me as “him”, not out of any malice but purely out of ignorance of who I am, it may initially take me aback, but primarily it just pushes me further back into this internalised transphobia.

It becomes a cycle: my internalised transphobia induced from my teenage years means I lack the belief in my own gender, which in turn further pushes me back into feeling confident in my identity as a woman, which in turn makes me less likely to correct misgendering. and so, each misgender causes me to further feel uneasy about the term misgendering. Misgendering perpetuates further misgendering and so on.

The fact that most of my misgenderings are out of ignorance rather than hatred is what truly worries me. As much as they remain the most malicious and harmful people to trans individuals, it could be argued that the subtle and systemic transphobia of cisnormativity is more damaging to the wider world’s view of gender than raging TERFs and ignorant 80-year-olds.

As it becomes clear to me that I am only gendered correctly once I’ve let people know my identity, so inherently I am automatically assumed to be a guy, and I realise that I have to keep coming out every day of my life (even the homophobic hecklers think I’m a gay guy), the more I give up on the idea of everyone seeing me the way I want to be seen. It is this cisnormativity, the fundamental and accepted way society as a whole sees gender – manifested, for example, in people consistently assuming before asking, even when I’m dressing femme, leading to acquaintances with people who think I’m a guy – that crumbles my identity and leaves me accepting misgendering even from people I know would be fine with me correcting them.

Having to justify your identity every day, having to come out for your entire life, would ruin anyone’s sense of self, and it is this that contributes to the cycle, making me stop seeing misgendering as “misgendering”, but as just another common occurrence that I’ve got used to. If people only gender me correctly when I’ve asked them to, what does this mean for my sense of identity and self, does it even matter, is it even real? If my identity is completely internal even when I try to make it external, can I trust my own opinion? One may say that I should change to fit this standard, but the question then becomes why should I have to change the person I’m comfortable being, with my voice and my style, in order to get other people to address me how I would like?

One may say that I should change to fit this standard, but the question then becomes why should I have to change the person I’m comfortable being?

Now, this is not to say I am entirely unstable in my own “trans-ness”, of course not. Everyone who knows me knows I am fairly out and open, and I am in the middle of a medical transition. Obviously, I know these thoughts are not true, but the fundamental nature of cisnormative society has caused my mind to be led here. Even though I know these thoughts shouldn’t be listened to, the fact I have them is the problem. Even if I may be confident a lot of the time, there is still that itch in the back of my mind, when I’m out on a girls’ night, or I’m introducing myself as “she”, that I’m pretending or interfering where I don’t belong.

I currently feel the most confident that I have ever been about my identity, but the inherency of society’s view of gender stops me from getting there 100%, and it is not the outward few transphobes that are the problem, but the automatic assumptions people make, and the inability for me to do anything about it. Luckily, it seems most people at university age seem to be a lot more open in this respect, and in my college especially, I have rarely felt unwelcome in terms of my gender or in the general acceptance of my identity, but the problem in the wider world still remains. I may, in the end, have the strength to believe in myself, and it seems we may be getting somewhere with this generation’s more accepting and understanding view of gender, but the existence of that itch means there is still some way to go, especially for myself.