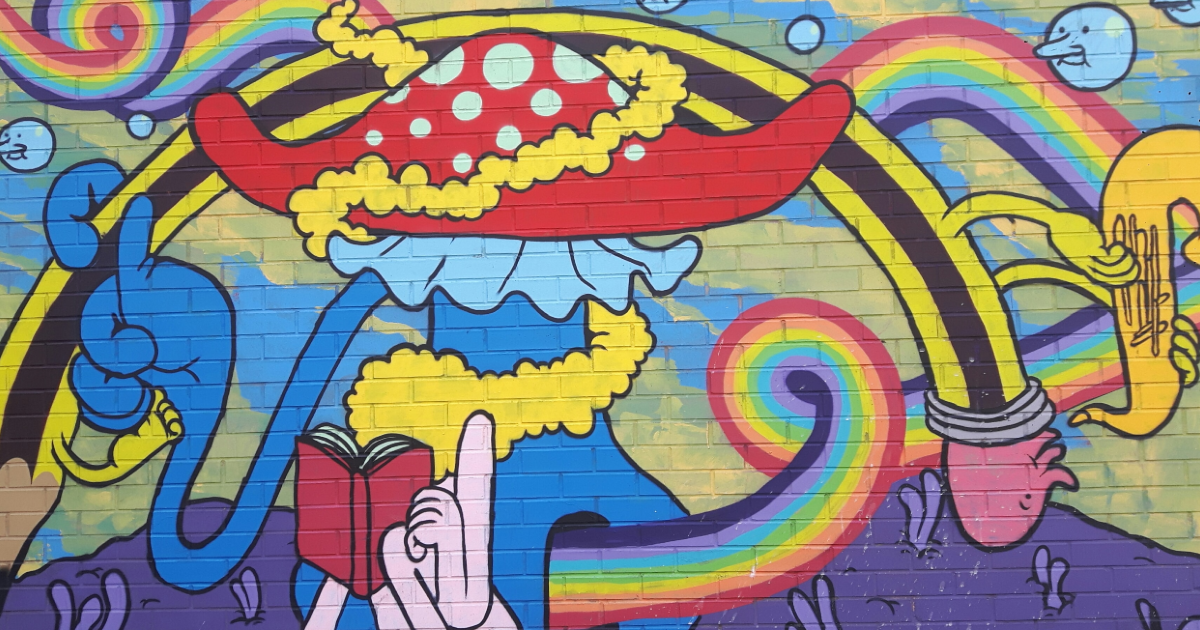 Meaning “mind-manifesting” in Ancient Greek, psychedelic drugs such as LSD, MDMA and psilocybin (the active ingredient in magic mushrooms) are well-known for their hallucinogenic and psychotropic effects. Despite their reputation as party drugs,  scientists have been trying to harness their mind-bending properties to create new treatments for psychiatric disorders for decades. In the 1960s and 70s, over 1,000 studies investigated whether psychedelics could be used to treat conditions such as depression, with over 40,000 people participating in trials. But, as fears over the harmful effects of psychedelics grew, governments around the world began to criminalise their use, effectively shutting down any further research on their value as medications.

Despite this societal baggage, psychedelics have recently undergone a resurgence in mainstream culture. The phenomenon of microdosing has taken Silicon Valley by storm, with high-fliers consuming minute quantities of psilocybin each morning to improve their focus and performance. There have also been pushes to decriminalise psychedelics in a number of US states, with campaigners citing that legal drugs such as alcohol and tobacco are much more harmful.

Their potential benefit for medicine has also not been forgotten. Since 2016, researchers in the UK have been working on a new approach to treating psychiatric conditions using psychedelic-assisted therapy sessions. This could be a major step forward for treating depression, as a large proportion of people do not respond to current antidepressants, and many experience negative side effects. However, questions remain about how this approach may work, and if it is actually more effective than the current treatments.

“There’s been a fundamental shift in me that allowed more light in.” This is how one participant described their experience of taking psilocybin as part of a small phase II clinical trial of the drug, published earlier this year in the New England Journal of Medicine. The research, led by neuroscientist Dr Robin Carhart-Harris at Imperial College, London, tested if their new psilocybin-assisted therapy was more effective than a traditional antidepressant.

In the trial, one group of patients received two high doses of psilocybin alongside extensive therapy sessions with trained psychiatrists. The other group received these same sessions but with a placebo tablet. Instead, they went home with a prescription for escitalopram, the best performing antidepressant currently on the market. After six weeks, the 59 participants were asked a series of questions to see if their treatment had worked. Remarkably, 70% of the participants who had received psilocybin were in remission, compared to only 48% of the escitalopram group.

People speak of witnessing “the bigger picture,” placing things in perspective, accessing deep insight about themselves and the world

Although this effect wasn’t significant, meaning the difference observed between the two groups may simply be down to chance, psilocybin-treated patients also reported a greater improvement to other aspects of their wellbeing, such as a reduction in their anxiety, compared to the escitalopram group.

For those who believe in the power of psychedelics for treating depression, this trial is hugely promising, being described by Dr Carhart-Harris as “tantalisingly suggestive of potential superiority of psilocybin therapy.”

Unlike traditional antidepressants, which work by increasing levels of the ‘feel-good hormone’ serotonin in the brain, the exact mechanism by which psychedelics are helping patients is unknown. One hypothesis is that they aid patients in breaking out of cycles of rumination or negative thoughts to help them to gain a new perspective on the world.

“Psilocybin is more like an emotional recalibration or reset, whereas the SSRI [antidepressant] is more like taking the edge off emotional intensity, which helps with stress management.”

However, some scientists have criticised the authors for overselling their results. According to Guy Goodwin, Professor of Psychiatry at the University of Oxford: “The present study is not a quantum leap: it is underpowered and does not prove that psilocybin is a better treatment than standard treatment with escitalopram for major depression.”

Professor Goodwin, along with several other high-profile scientists, is pointing out that a trial of only 59 participants is simply too small to draw broad conclusions about how well psilocybin might work in the general population. This is particularly true of this trial, where only a third of the participants were female, despite depression being more common in women than in men. The majority were also white and had university degrees, raising questions about how effective this treatment may be in a more diverse demographic.

Another crucial aspect of this trial was that it was conducted double-blind, meaning neither the researchers nor the participants knew which antidepressant treatment they had received. This should prevent someone’s pre-existing knowledge or expectations of psilocybin from influencing the results of the experiment. However, as Professor of Psychopharmacology at the University of Oxford Phil Cowen comments, “it would have been pretty obvious to most patients whether or not they had received an active dose of psilocybin,” given the intense hallucinations it can produce. If the patients believed that psilocybin was more likely to ease their depression, they may have been experienced more beneficial effects. On the other hand, those who realised they were in the escitalopram group may have been disappointed at not trying the new therapy, and therefore more despondent when asked if their treatment had worked.

The future of psychedelic therapy

Despite its flaws, this new trial does seem to suggest that psilocybin may work better than escitalopram. However, a much bigger and comprehensive study of psilocybin is needed to fully understand whether it will be useful for treating depression.

And this is exactly what London-based pharmaceutical company COMPASS Pathways is aiming to do. COMPASS is a mental health care company, with a mission to accelerate patient access to evidence-based innovation in mental health. In an exclusive interview with The Oxford Student, I asked a representative of the company to describe their current research endeavours.

This new trial does seem to suggest that psilocybin may work better than escitalopram.

If successful, this trial will provide more evidence of the effectiveness of psilocybin therapy for patients who have struggled to cure their depression with traditional treatments. The results of this trial are expected to be published by the end of the year.

But they also point out that psilocybin is unlikely to be something you’ll get prescribed by your GP. “Psilocybin therapy, if approved, could be another option for patients who are not helped by existing treatments… This is unlikely to be a first-line treatment for depression – antidepressants work for many people (and that’s good!). We want to help those who aren’t in that category.”

However, some people have concerns over the use of psychedelics for treating psychiatric disorders, such as the risk that the drug could be abused by patients, and the controversial nature of the treatment. In fact, it took 32 months for the initial trial of psilocybin by Imperial College to be approved by ethical committees. So, I asked COMPASS what they think is the biggest challenge facing the adoption of psychedelics for treating mental health conditions.

“One of the biggest challenges in the adoption of psychedelic therapy for mental health conditions will be to make sure that the work is done rigorously and scientifically. As with any medicine, we need to generate the evidence to show this has been tested and that we know it is safe, effective and of the highest quality. The COVID-19 vaccines have shown how important it is to reassure people that clinical trials have been carried out and that regulators have approved the medicines before they are widely adopted.

There is an urgent mental health care crisis and we need to get medicines to patients in need as quickly as possible – but in a way that prioritises safety, efficacy and quality.”

It is clear, then, that a great number of questions still need to be answered before psychedelic therapy is available to patients. It’s yet to even be proven to work better than problematic, currently-used antidepressants. Nonetheless, to its proponents, psilocybin is the first drug in decades that stands a chance at advancing the treatment of depression. According to Prof Goodwin, “Remedicalising psilocybin and related drugs is the most interesting project in contemporary psychiatry.” Only time, and a lot more research, will tell if psilocybin will live up to these high expectations.