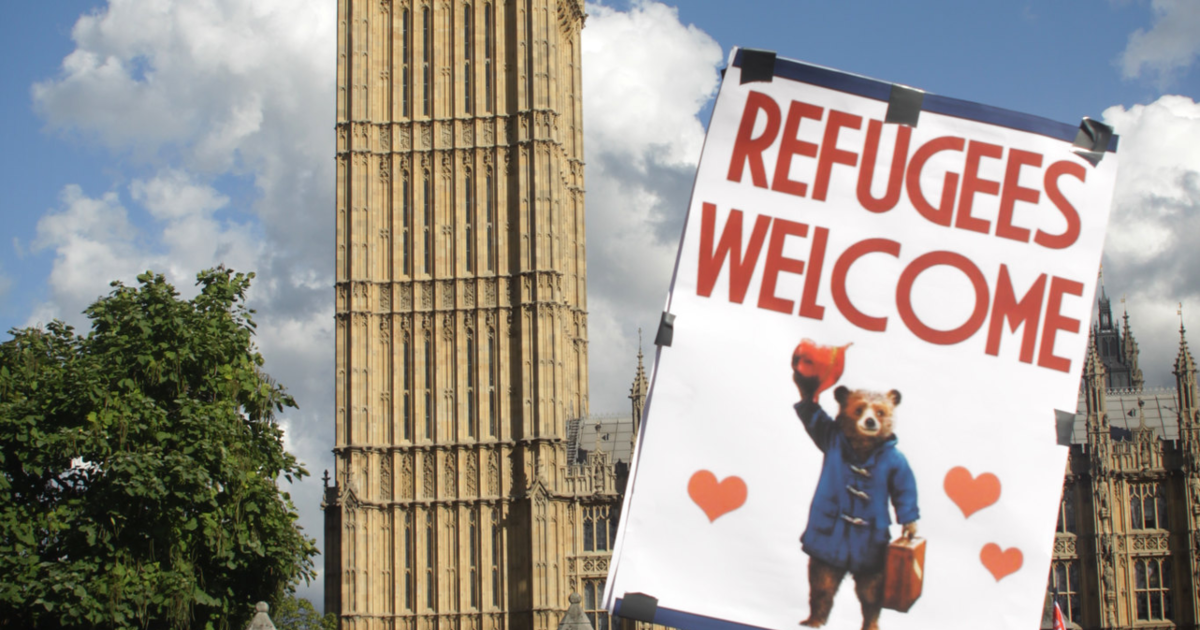 The Crisis: why aren’t we helping refugees?

Image Description: a banner reading ‘Refugees Welcome’ with a picture of Paddington Bear, in front of the UK Parliament

The 14th of June marks the beginning of ‘Refugee Week,’ a UK-wide event to commemorate the lives and achievements of refugees and asylum seekers. The event has the aim of raising awareness of the challenges faced by displaced people across the world, and highlight the importance of openness towards them.

Although this initiative should be welcomed, the UK’s wider response to people seeking sanctuary paints a wildly different picture of how they’re treated in the UK. Most recently in March this year, the Home Office announced its ‘New Plan for Immigration,’ setting out the government’s new policies regarding asylum seekers and migrants. It’s important to note that, although the two are often conflated in the media, asylum seekers are people seeking safety in a new country, whereas a migrant is anyone crossing international borders for any reason. Yet the Home Office’s plan seems to send out a clear message to anyone trying to enter the UK: you are not welcome here.

The most striking part of their legislation is the statement that “for the first time, whether you enter the UK legally or illegally will have an impact on how your asylum claim progresses.” This means that if you enter the UK ‘illegally,’ through boat crossings, without a visa or passport, or if entering from a nation considered a ‘safe country,’ you will be denied asylum in the UK.

The Home Office’s plan seems to send out a clear message to anyone trying to enter the UK: you are not welcome here.

What this fails to take into account is that there is no such thing as an ‘illegal’ asylum seeker. The right to claim asylum is a fundamental human right that we all have, if unable to return to our country of origin. The Home Office’s plan therefore goes directly against international law, as it defies the UN Refugee Convention which defines and protects this right. The plan also fails to consider that not all countries which the UK considers ‘safe’ will be appropriate for all asylum seekers, due to individual circumstances. It also prevents asylum seekers from having an equal chance at entering the UK, as they will have varied access to documentation, transport, money and language skills, amongst other things. Most shocking of all is the blatant lack of humanity and empathy in this messaging. Asylum seekers are seeking refuge in a foreign country for fear of persecution in their country of origin – something which no one should ever be punished for.

The UK media’s language and composure also reflect the wider ‘hostile environment’ which the Home Office has created, with a study finding that the UK’s media is the most aggressive when reporting on asylum seekers, compared to other European countries. We’re all familiar with the frequent newspaper headlines announcing ‘illegal’ boat crossings ‘flooding’ into the UK, causing ‘chaos’ on our borders. These buzzwords oversimplify what is an extremely tragic and complicated problem, and marginalise those involved through vilifying them. We become close to apathetic towards the people fleeing persecution themselves, and those sadly lost, as deaths are so often brushed over and forgotten about. It becomes all too easy for the government to wipe their hands clean of the problem when the media and public themselves don’t care either.

What we should be doing is […] allowing everyone an equal chance to claim asylum […] to merely invoke their human right.

Yet what seems clearest from these headlines is that the UK’s deterrent methods of only accepting ‘legal,’ asylum seekers does not in fact stop people trying to reach the country ‘illegally,’ but instead just makes their journey that much harder, often impossible. What we should be doing is helping people reach the UK safely and allowing everyone an equal chance to claim asylum or, more simply put, to merely invoke their human right.

It’s embarrassing that the world’s wealthiest 6 countries only host 9% of all refugees, while 88% are hosted by the so-called developing world. It’s embarrassing that we impose so many obstacles and caveats on seeking asylum, when the truth is that anyone desperate enough to travel in such drastic conditions is in a position where any form of help is appreciated and needed.

The Home Office’s measures mean that now boat crossings across the channel have reached a record high while the number of people being offered resettlement or asylum has simultaneously dropped massively. What happens to the countless people turned away, particularly during the pandemic, is unimaginable.

Despite this, many organisations and charities are working to provide asylum seekers and refugees with aid, be it financial, emotional or legal. Closer to home, both Somerville and Mansfield College have recently become ‘University Colleges of Sanctuary.’ To do so they have fostered values of inclusivity and implemented measures to help those seeking sanctuary reach higher education, such as establishing a Sanctuary Scholarship to provide a fully-funded place for any student seeking sanctuary. Other colleges should be encouraged to do the same, to show some sense of solidarity with people who already face so much opposition from the government. As individuals, there are numerous NGOs we can work with to support refugees until the UK government decides it’s time to step up and do the same, and finally show some humanity.