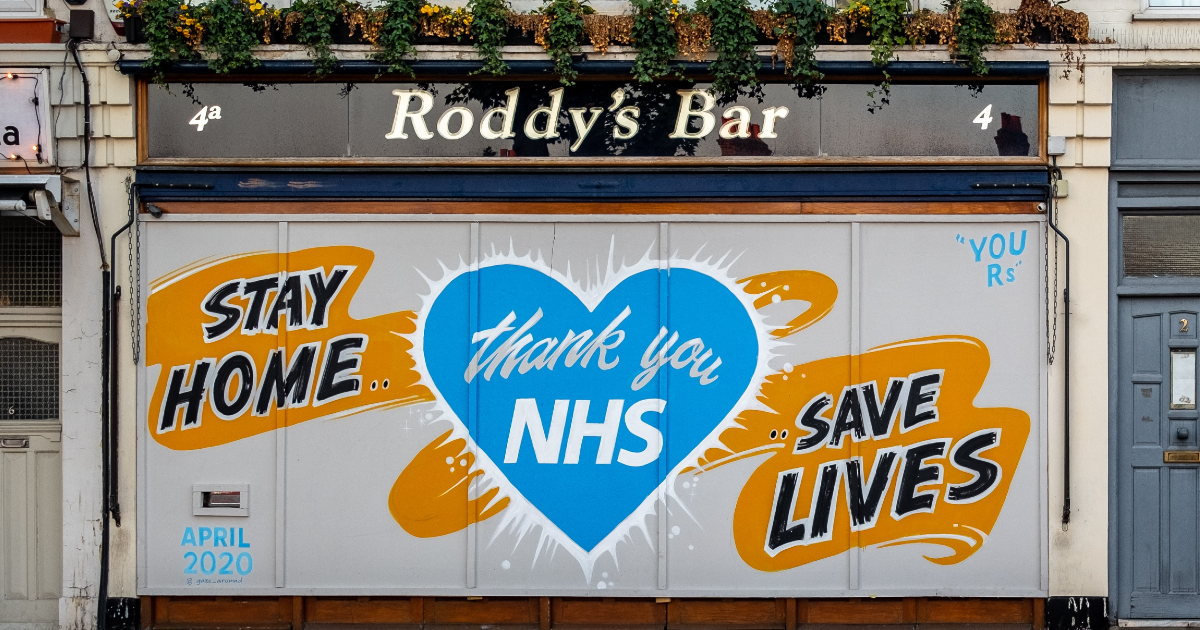 DEBATE: Covid restrictions should not be lifted on the 21st of June

Image Description: a closed bar front with ‘Roddy’s Bar’ written on it and graffiti reading ‘stay home, thank you NHS, save lives’

A 1918 Red Cross advert in the Washington Times recommended the use of “gauze mask(s) to halt the spread of the plague.” At the beginning of what would turn out to be a deadly second wave of the so-called Spanish Flu, the advert advised Americans to take rapid scientific and medical advice in order to avoid becoming infected by the “plague” that would later claim 50 million lives in total.

Unlike the bold and direct instruction given in the Red Cross advert, guidance and advice from the U.K. government has been varied and mixed. Masks, clearly a high priority for medical authorities during the 1918 flu pandemic, were initially met by a somewhat ambivalent reaction from the UK government. Boris Johnson reportedly ignored advice from scientific advisors on lockdowns and delayed the first period of lockdown. Only earlier this year Johnson opened up schools against scientific advice, only to close them down after a day when it became clear that this was a dire course of action. The UK government has clearly failed to heed scientific and medical advice over and over again, resulting in an immense loss of life and suffering.

So, as the Delta variant spreads and scientists warn that the UK stands on the brink of a third wave of Coronavirus, the past year has surely taught us that medical and scientific advice has to be listened to. With over 6,000 new infections reported in the space of 24 hours and the virus’ reproduction rate climbing above 1, the prospect of another serious wave of infection – one that spreads mainly amongst unvaccinated young people – seems even more realistic.

This does, however, put the Conservative government’s plans for a full reopening on June 21st in danger. On this date, the government hopes to remove all laws surrounding social contact and ease the restrictions that currently apply to things like nightclubs and performance venues. June 21st has become a golden date to which, after over a year of difficult restrictions, people are rightly looking forward to. Yet, the spread of the Delta variant has led some experts to advise against the planned unlocking.

Of course, the hope is that the Delta variant is brought under control through the UK’s advanced vaccination programme, but if it continues to spread and cases rise Boris Johnson will be faced with another serious decision. June 21st presents another fork in the road, when the government must choose whether to listen to the science or to press ahead with its stated intentions, even if these are against expert advice.

After a struggle against Coronavirus, in which government messaging has been confusing, unclear and even outright contradictory, it remains to be seen how the Conservatives will confront this latest challenge and the threat it poses. However, it is clear that Johnson and the Conservatives must truly listen and respond to experts and their guidance. As the UK confronts a barrier in its route out of the pandemic, the Conservative government must act decisively and be guided by changing scientific understandings. After over a year of dithering and delaying making difficult choices, the government must confront the challenge posed to the June 21st reopening head-on, if it is to avoid further catastrophe.

The initial benefits of the total lockdown which the government first implemented in the country back in March 2020 were completely clear. We were facing a disease with a higher mortality rate than now, especially among the elderly, and the possibility to infect others asymptomatically. But, most importantly, this was a new virus to which no one had any immunity, and there was no understanding regarding what medication was best to combat this deadly virus. These dangerous aspects of COVID-19 have since been mostly altered: we have a high percentage of vaccinations to give to the population, and the emergence of new innovative techniques have served to reduce the mortality rate of COVID by up to 50%. The current situation bears far too little similarity to the one back in March, or the one during the second lockdown in November, or indeed the third lockdown in January.

Now the government has rightly prioritised the elderly and most vulnerable for their vaccinations, as they were the ones most at risk of dying from the virus. This has utterly changed the demographics of who is most susceptible to the virus and, more importantly, how severely affected they might be if infected with COVID.

Let us consider the rates of immunisation and hospitalisation prevention with the Oxford/AstraZeneca vaccine: 60% efficacy at preventing symptoms and 90+% at preventing symptoms that require hospital treatment. These two things combined mean that any new outbreak will result in far fewer deaths and far fewer hospitalisations, which will not overwhelm the NHS. These are all reasons why stringent lockdown rules are far less useful now than they used to be.

But there are also clear reasons as to why it is necessary to open up for the good of the community, the state of the economy, and the state of British mental health. The British economy has shrunk massively as a result of the lockdowns imposed by the government on our freedoms to shop, to drink and to frequent nightclubs. Even now, in our loosened lockdown, pubs and clubs are only allowed to open in a very restricted sense, driving down their profitability and reducing their chances of ever opening up properly in future. For example, here in Oxford the well-known nightclub ‘Fever’ has been forced to close, and this scene is repeated elsewhere across the country. What these places need most of all is to be allowed to fill their dance floors once again, or risk never doing so again.

These constant lockdowns have also placed inordinate strains on the mental health of the student population; suicide rates in students are at a high of one every two days. To understand how awful this rate is, the most recent high in 2017 was of one every four days. This doubling is very alarming, and perhaps the first step in alleviating the strain of mental health is to open up fully, and allow everyone to return to a sense of normality.