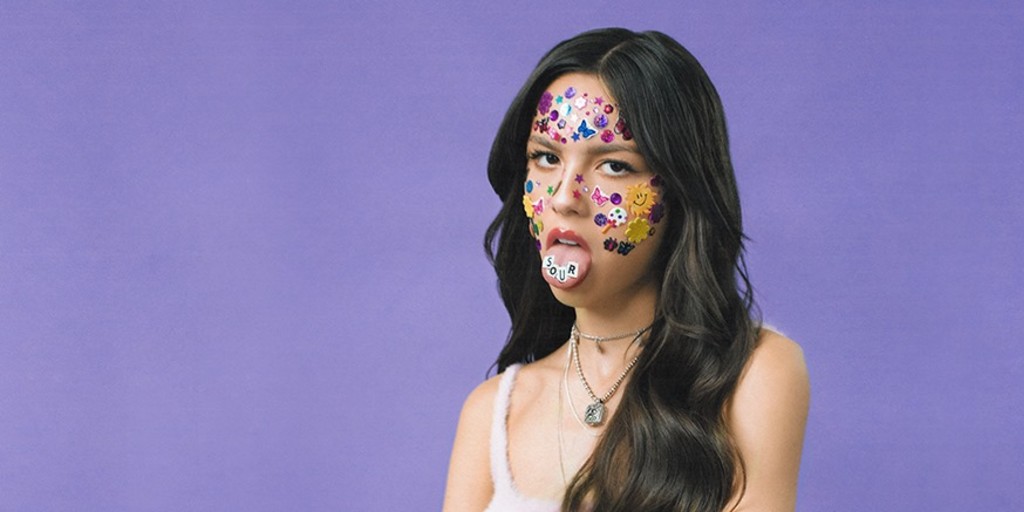 Image description: Rodrigo sticking her tongue out and standing against a purple background, with stickers on her face and the letters spelling ‘SOUR’ on her tongue.

Olivia Rodrigo’s SOUR is the perfect debut album. It draws on familiar genres and themes, which is probably why Rodrigo has been compared so much to the likes of Taylor Swift (who is credited on ‘1 step forward, 3 steps back’, a song which interpolates Swift’s ‘New Year’s Day’) or Paramore (for songs like ‘good 4 u’). While it has echoes of these other popular artists, Rodrigo brings her own vocal and songwriting talent to the album.

Part of the reason that Rodrigo has been so successful is that her album speaks to a lot of issues that teenagers and young adults face. The album opens with the intense ‘brutal’, which speaks to the way that the expectations of being young don’t meet up to reality, as Rodrigo sings: “They say these are the golden years/ But I wish I could disappear”.

Part of the reason that Rodrigo has been so successful is that her album speaks to a lot of issues that teenagers and young adults face.

For me, the other stand out songs of the album are ‘good 4 u’ and ‘jealousy, jealousy’. Their impact comes from the fact that they are not the same indie-pop kind of style that makes up a lot of the rest of the album, and they are songs that allow Rodrigo to shine without getting compared to Swift. ‘good 4 u’ has been compared to Paramore’s ‘Misery Business’, and it shows a more edgy side to Rodrigo. Meanwhile ‘jealousy, jealousy’ is a song that feels really relatable because of how it talks about comparing yourself to others online, singing “All I see is what I should be”.

No review of this album would be complete without talking about ‘driver’s license’. Though I still can’t get that endlessly catchy bridge out of my head (‘red lights, stop signs…’), and it is easy to see why it went viral, I honestly don’t think this is the best song of the album and it is probably my least favourite out of its singles.

While I enjoy the other songs on the album, like ‘happier’ and ‘enough for you’, they don’t really stick with me as much. That being said, I like how Rodrigo often tells a narrative through her lyrics, and I think it was quite clever that the album ends on ‘hope ur ok’, a song that turns the attention of the album to the listener and the issues that they might be dealing with. While the rest of the album is told mostly from a single perspective about one person’s experiences, ‘hope ur ok’ ends the album with a message of hope and solidarity to the listener: “I love you/ And I hope you’re okay”.

The main accomplishment of this album is that Rodrigo has managed to sidestep the trap that many Disney stars have previously fallen into – of being seen as juvenile and having to ‘rebrand’ themselves at a later stage. Though many younger teens do enjoy Rodrigo’s music, it seems to appeal to older audiences as well.  The success of ‘driver’s license’ seems to have transcended the TikTok bubble and has also gained traction on mainstream media, with Rodrigo appearing on the likes of Saturday Night Live and The Tonight Show.

The main accomplishment of this album is that Rodrigo has managed to sidestep the trap that many Disney stars have previously fallen into.

Some critics have dubbed Rodrigo an ‘industry plant’ because of her success. In terms of the negative implications of this term – i.e. that the artist is only successful because of their record label or management pushing them, and not because of talent, I don’t think I agree with this, as it is not as if Rodrigo’s success came completely out of nowhere. She is currently a lead in the popular Disney+ show High School Musical: The Musical: The Series, and one of her songs from that show, ‘All I Want’, went somewhat viral (though not to the same level as her newer music). It is common for stars of Disney shows to go on to have successful music careers, and Rodrigo definitely has the talent for it.

However, I do think that the way that Rodrigo’s music has been marketed has had a hand in her continued success beyond going viral. An obvious example of this is sending out promotional packages to celebrities to celebrate SOUR’s release, which many celebrities shared on their own social media. But I don’t think being backed by a good marketing campaign makes someone an ‘industry plant’, as it is quite standard for artists. For better or worse, signed artists often have teams behind them to promote their music that smaller independent artists might not have.

There are definitely many issues within the music industry that should be discussed. However, most of the talk about ‘industry plants’, especially during a time in which going viral on social media like TikTok can help launch a career, seems to focus on young female artists like Billie Eilish or Rodrigo, and insinuate that they lack talent, which I don’t think is a fair assessment.