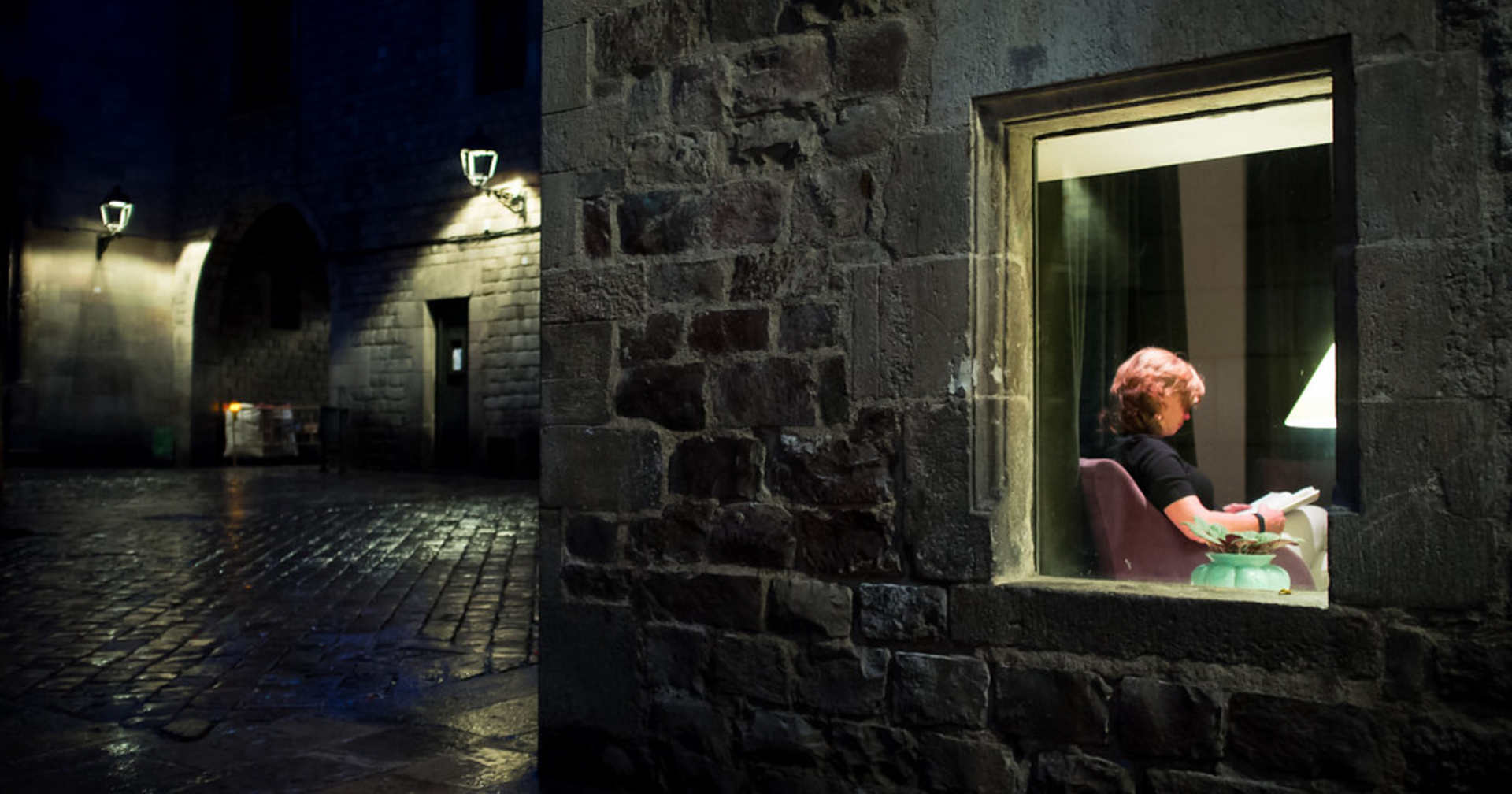 On the shoulders of giants

Image description: a woman can be seen through a window reading a book alone. It is night outside.

There are few things in the world more daunting than the prospect of job-hunting. With Oxford students being amongst the most prolific users of LinkedIn, and with weekly events from the Careers Service about formatting your CV and smashing your interviews, there is a pervasive sense of career-related competition. As some are siphoned off into the world of consultancy, others into trading, and an increasing number of students exploring the world of NGOs and human rights activism, we are left with the absurd and overwhelming prospect of choosing our career paths in an increasingly competitive job market.

If the pressure of choosing the sector wasn’t enough, we must also navigate the perpetual challenge of time-management. With (often obscene) weekly workloads, imminent exam revision, and some semblance of a social life (or what’s left of it in the midst of a global pandemic),  curating a CV and cover letter can’t afford to be much more than an afterthought. After all, if our job prospects are contingent on our academic success, it seems counterintuitive to sacrifice education in favour of applications. But these prospects are also contingent on our applications: after all, we expend so much energy on our degrees with the express goal of finding a fulfilling occupation thereafter. It’s a catch-22 of the most stressful kind, and it’s hard to convince ourselves of an appropriate balance, let alone of which career path to take.

Obviously, this is just a surface-level summary of the pressures that we face when considering our prospects. But this isn’t an article about how to apply for jobs, or balance your time in doing so – it’s not even a reassurance about how we have our whole lives ahead of us to choose our careers, and how our decisions don’t have to be definitive. This is an article about grief. For those who know me, that will come as no surprise: grief is one of the prevalent talking points in my life, having lost my dad at the age of 18, and having spent the three succeeding years exploring its implications in my daily life.

It’s no surprise that, in the context of deliberating over our career paths, grief can play an enormous role.

It’s not uncommon for our loved ones to occupy a large amount of our thoughts and contemplations – but that’s not to say that it’s easy, either. Even the more trivial decisions of what film to watch, or what jumper to wear, or what to eat for dinner, can easily consume a disproportionate amount of emotional energy on a daily basis – so it’s no surprise that, in the context of deliberating over our career paths, grief can play an enormous role.

In the same way that it’s difficult to separate our own ambitions and desires from those that are expected of us (particularly as Oxbridge students), it’s difficult to separate our personal motivations from those that stem from grief and a desire to make our loved ones proud. Not to mention the cognitive dissonance in knowing that, no matter what I do, my dad would be brimming with pride, whilst also making painstaking deliberations over my future in the hopes of some hypothetical pride and validation. With the added complication of grief, the already-complex labyrinth of job-hunting can become impossible to navigate, as introspection suddenly demands to examine a world of unknowns.

This world is already a minefield of its own: a simple search on Careers Connect can swiftly devolve into an interrogation over hypotheticals. “If my dad was still alive, would I be applying for this?”; “If my dad was still alive, what would he suggest?”; “If my dad was still alive, would this matter as much?”. It becomes an intricate exploration of almost all of my moral values, my ambitions, and an immense struggle to connect with the person who existed before he died. Because there was a version of me that was interested in a career in law, or in politics. There was a version of me that was determined to go into the arts, and pursue a similar career path to my dad. There was a version of me who could’ve gone on to desire an entirely different sector, an entirely different environment, and an entirely different life. But I don’t know that person. I don’t remember why they wanted what they wanted, or whether they even really wanted it. All grief aside, that person was eighteen years old – there’s every likelihood that I would’ve changed just as drastically regardless of my dad’s mortality.

But I don’t know that for sure. I don’t know many things for sure, really. And given the helpful psychoanalyses of friends who tell me that my desire to work in a coffee-shop for the rest of my life is ‘intentionally unambitious’ due to a fear of failure, I probably know even less. Because now it’s not even a question of ‘what would my dad want’ or ‘what do I want’, it’s a question of some underlying fear of letting down a father that I no longer have. My justifications and motivations regarding social entrepreneurship, and community change over global change, are significantly less potent as they’re reduced down to a façade for a ‘fear of failure’. And maybe that’s true – maybe I’ll surprise everyone, defy all odds, and get a 1:1, and lose all desire to run my coffee-shop and change my local community. Maybe I’ll ascend the social and political hierarchies and start applying for jobs in Whitehall. But I think that’s unlikely, least of all because my dad disdained that, and if I know one thing it’s that I seek little more than the validation of my hypothetically-still-alive-dad.

We all want our parents to be proud of us, and the trauma that accompanies grieving one of them only makes that desire stronger.

It’s frustrating to think about. Let alone to talk about with self-certified pseudo-psychologists who like to link every problem and decision back to my dad. And maybe that’s so frustrating because it’s fucking obvious. Obviously I seek out my dad’s traits in my friends – I’m desperate for any single part of him to be in my life in any single way. And obviously seek his validation – we all want our parents to be proud of us, and the trauma that accompanies grieving one of them only makes that desire stronger. Obviously I want to carry on his legacy of changing communities, of working harder than anyone I’ve ever met because he actually believed in his cause – that’s a brilliant legacy to have, and (as he would have said himself) if I don’t do it, who will? And whilst all of this might be obvious, it is of course painful anyway. Like I said, there’s a cognitive dissonance to negotiate, and that includes the frustration I feel when others voice the things I’m already aware of.

There isn’t really a fun or enlightening ending to all of this: after all, I’m still a year off from graduation, and thus slightly more distanced from the reality of these decisions. And my experience of grief is just that – it’s my experience. I can’t generalise it, nor advise others on their own struggles of grief and the entirely essential yet entirely petrifying experience of choosing a career-path.

All I can say is that it’s hard. It’s hard to manage your own expectations whilst inventing and managing those of someone you’ve lost. It’s hard to separate your desires from those that your parents have, created by you by proxy, and to end up in a place where we’re satisfied. It’s hard to separate adulthood from living-without-someone-hood, especially when the two have so aptly coincided. That’s all I know, really – that it’s hard, and that it hurts, and that in all likelihood, you’ll spend more time pondering your parent’s hypothetical opinion than you will your own. And that in the end – for me at least – none of it will really matter. Because I know that all my dad ever wanted for me was happiness and fulfillment. Perhaps those two things would be found through different paths were he still around, and were I not burdening myself with some abstract weight of ‘legacy’, but I know that he would be proud regardless. In a world full of unknowns, that’s the most important certainty I could ask for.