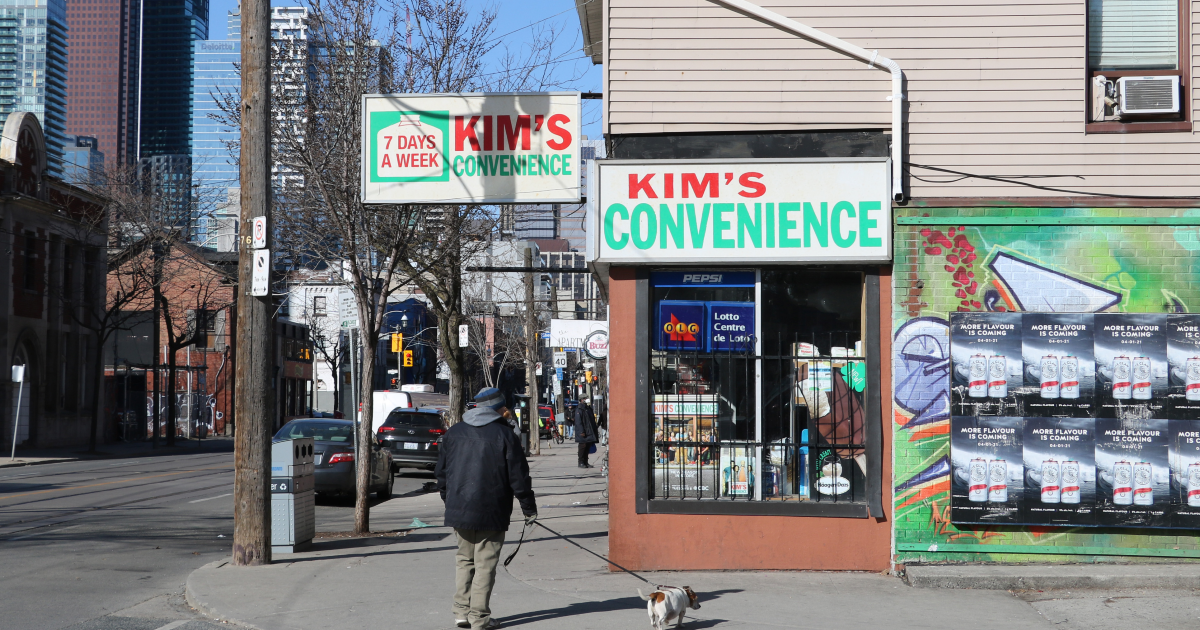 We “See You”: The Importance of Representation in sitcoms like ‘Kim’s Convenience’

Image Description: A still from the sitcom ‘Kim’s Convenience’ showing the exterior of the titular convenience store

In an  early episode of Kim’s Convenience, a gag is made when one of the main characters, (Janet), her cousin from Korea (Nayoung), and Janet’s two non-Korean friends get confused by the complex linguistic formalities of familial address in Korean language and culture. As her younger cousin, Nayoung calls Janet her ‘unnie’ (언니) – meaning older sister – which Janet’s friends first assume must be her Korean name. Before Janet’s male friend, Gerald, attempts to use the term, Nayoung corrects him, explaining that because he is a boy, the correct way to address Janet would be ‘noona’ (누나), also meaning older sister, but for when a boy is speaking. However, Janet then has to correct this as Gerald is older, meaning that Gerald is Janet’s ‘oppa’ (오빠) or older brother for a girl, and Janet is Gerald’s ‘yeodongseang’(여동생), meaning younger sister for a boy. Exasperated, Janet pleads that they just call her ‘Janet’.

This scene captures the spirit and essence of Kim’s Convenience. Through its sharp and clever dialogue, it is able to bring a culture from the margins of Western television to the forefront, whilst creating comedy that can be appreciated and understood by all audiences. Although it doesn’t allow the more serious issues to dampen or precede the humour, underlying the comedy are the very real tensions and lived experiences of diasporic minorities.

In the scene described above, the comedy is balanced by Janet’s ostensible, unsettled discomfort as her diasporic identity and the gaps in her Korean cultural knowledge are exposed by her cousin’s native Korean identity and upbringing. In many ways, she demonstrates the common sense of shame felt by many diasporic individuals who experience geographical and cultural separation from their ethnic and cultural background through their experience as immigrants living in Western societies. Through the accessible vehicle of comedy and sitcoms, such narratives that are often marginalised, misunderstood or difficult to articulate, for both those who experience it and wider audiences, are suddenly thrusted into the mainstream.

Kim’s Convenience is part of a wave of new sitcoms emerging in the mid-2010s, such as Fresh off the Boat and black-ish, that appear to be reacting against the familiar saturation of predominantly white sitcoms (popularised in the late twentieth and early twenty-first centuries.)

In many of these ‘classic’ sitcoms, people of colour are often entirely erased from narratives except for when their cultures are exploited for ‘jokes’, or they occupy superficial, marginal roles embodying racial stereotypes and caricatures for comedic value. In the first two minutes of the first episode of How I Met Your Mother, Barney expresses his sexual fetish for ‘half-Asian girls’ and ‘Lebanese girls’: racialised gags that capture his playboy personality. In Friends, not only are Monica’s cornrows from Barbados a form of cultural appropriation, but they themselves become a gag as the other characters react in absolute disgust. Here we see North African culture reduced to a punchline and the metaphorical antithesis of seemingly natural, implicitly white, beauty.

Through the accessible vehicle of comedy and sitcoms, such narratives that are often marginalised, misunderstood or difficult to articulate, for both those who experience it and wider audiences, are suddenly thrusted into the mainstream.

But this white normativity of utilising ‘other’ cultures as a leverage for baseless gags and punchlines is reversed in shows like Kim’s Convenience, where jokes are balanced with telling insights into the lived experience of minority groups and people of colour.

Like many other classic sitcoms, Kim’s Convenience explores the awkward entanglements of romance, unrequited love, clandestine crushes, friendship strains and resolutions, family drama and love. However, it also consciously reacts against earlier sitcoms by normalising the many interesting and nuanced aspects of diasporic Korean cultures.

Not only does this expose wider audiences to such otherwise side-lined cultures, but it also allows for cultural identification and rediscovery of such for those from a similar background, such as myself. For many diasporic individuals, the world we inhabit is saturated by Western cultures and references that manifest not only in our daily lives, but also in the media we consume: realities that had, at least for me, been passively accepted as the norm.

Through Kim’s Convenience, not only was I seeing things that were familiar to my cultural roots being represented and normalised on screen, but I was also learning and rediscovering things from my own culture: from Korean foods and cuisines, to martial arts such as Hapkido and wider Korean history.

As Janet’s father and the proud, often stubborn, family patriarch, one of Mr Kim’s repeated gags is ‘1910, Japan attack Korea’, with its first use in relation to Mr Kim’s tendency to report Japanese-made cars parked in the no-parking zone. Despite its comedic value, the gag functions as a haunting reminder of Japan’s aggressive colonial exploits in Korea, including its erasure of language and culture, and the establishment of young sexual slavery, or ‘comfort women’. It is a history that not only continues to be denied by Japan today, with the Japanese government often demanding the removal of ‘comfort women’ memorial statues around the world and continuing to erase its colonial past from school history syllabuses, but also tends to get lost in the prevailing and reductive tendency to characterise colonialism as perpetuated solely by white, Western imperial forces.

However, Kim’s Convenience doesn’t seek to romanticise immigrant cultures either. Indeed, it actively confronts many of the issues within Korean values. This is particularly evident in relation to family, from the pressures of marriage – placed often on young women – to the difficulties expressing love: all of which often result in pushing family members away. It is throughout the show’s first four seasons that we witness the gradual reconciliation between the characteristically stoic Mr Kim and his estranged son, Jung, who was kicked out of home as a teenager.

But this white normativity of utilising ‘other’ cultures as a leverage for baseless gags and punchlines, is reversed in shows like Kim’s Convenience, where jokes are balanced with telling insights into the lived experience of minority groups and people of colour.

Just as we watch the Kim family slowly heal over the course of the show, so too are we watching the wounds of white normativity – previously perpetuated by Western sitcoms – also being healed, as minority, immigrant and diasporic cultures are able to find a voice and see themselves in the everydayness of such emerging sitcoms.

“Representation matters. I think a show like Kim’s Convenience is proof that representation matters because when communities and people see themselves reflected up on the screen, it is an inspiring and very powerful moment for them because it means they move from the margins into the forefront. It gives them a voice. It gives them hope. Hope is a very empowering thing because it inspires people. When you give people a voice other people start listening. And when people start listening, things start to change. And we need change. We need to effect change.”

But maybe it’s not just television and filmmakers who have a responsibility to enact this change. Although they are the individuals who shape the narratives that audiences and wider society receive, there is also a responsibility on us as viewers to actively participate in this change. To actively listen to these new and emerging voices. To give minorities a substantiated platform to share their stories.

Maybe, instead of watching Friends for the fifteenth time, or rediscovering Seinfield, it might be worth watching something new. To find up-and-coming shows and creators. To expose ourselves to the lives, cultures, stories that we might not be familiar with, that might make us uncomfortable by exposing our own internalised normativity. For it is these shows that, slowly but surely, are beginning to represent the complex, lived experiences of all individuals in our societies. And who knows, you might just get hooked.