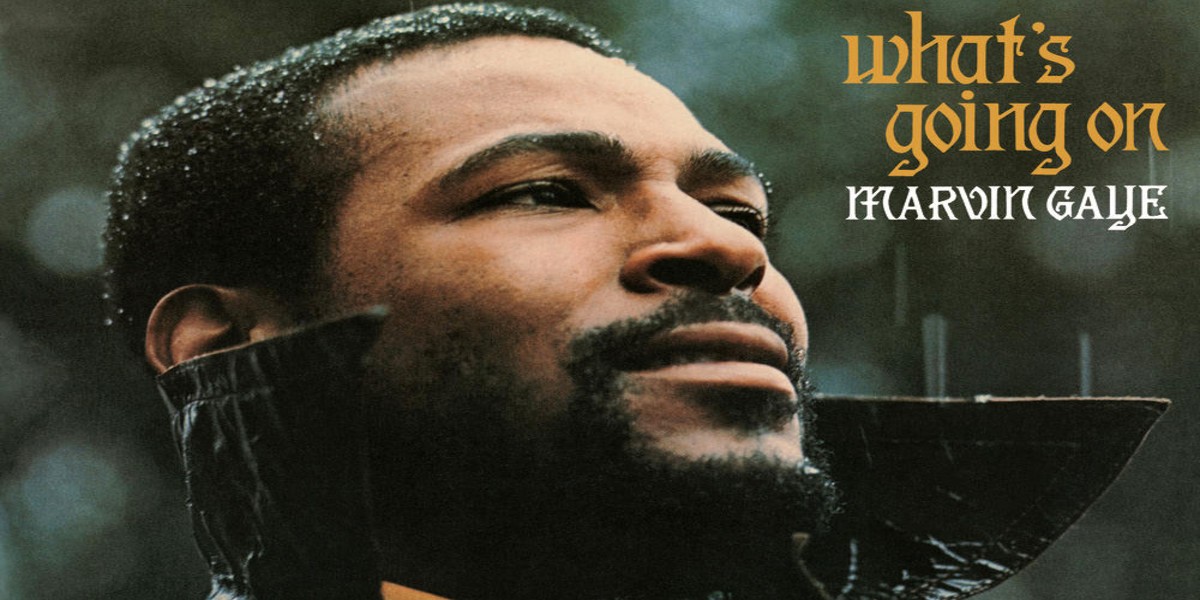 ‘What’s Going On’: Marvin Gaye’s Anthems for the ages

Image description: The album cover of Marvin Gaye’s What’s Going On, depicting a close-up of Gaye wearing a raincoat and looking pensively into the distance.

One of the most influential albums of all time, Marvin Gaye’s What’s Going On (1971), turned 50 this month.  Owing to its timeless appeal and status as a firm family favourite, Gaye’s seminal work is once again being reappraised in the context of contemporary issues such as civil rights, climate change, and war of any form.  To openly broach these topics in the early 70s was radical, direct, and confrontational. Although the album certainly marked a departure from the Motown sound to more personal material, Gaye’s sharp social commentary never compromised the soft sugary smoothness of a unique sound that came to define the ‘Prince of Soul’.

After a flurry of polished pop and R&B hits including How Sweet It Is To Be Loved By You (1966), Ain’t No Mountain High Enough (1967) and Heard It Through The Grapevine (1968), Motown producer Berry Gordy was shocked by what he saw as Gaye’s protest song. Feeling that the lyrics of What’s Going On were ‘too political’ for radio, he refused its release out of fear the singer would lose his crossover audience. Had it not been for his change of mind, what a masterpiece we would have lost: the gentle grooves, the sacred harmonies, the paeans to love and compassion that sedate the mind and elevate the captive listener to some higher place.

Had it not been for his change of mind, what a masterpiece we would have lost: the gentle grooves, the sacred harmonies, the paeans to love and compassion that sedate the mind and elevate the captive listener to some higher place.

The album’s title song begins with a smooth bongo shuffle leading into an alto sax flourish before we hear Gaye’s voice calling out, ‘Mother, mother/ There’s too many of you crying. Brother, brother, brother/ There’s far too many of you dying’, a sorrowful verbal opening to a song that is light and pleasant on the ear. The song was inspired by an incident of police brutality during protests in Berkeley California as part of the Free Speech Movement and protests the Vietnam War. Without anger or hate, Gaye laments the plight of his fellow man and calls out for his listeners to change. It is for this sensitivity that he has come to be recognised as an icon of the BLM movement.

The second verse continues with the same theme: ‘Father, father…We don’t need to escalate/ You see war is not the answer and only love can conquer hate’. The theme of war and the need for love and unity to triumph over strife and death is repeated in What’s Happening Brother? Gaye asks, ‘War is hell, when will it end? When will people start gettin’ together again’. Not could these lyrics be applied to today’s wars, notably the ongoing conflicts between Israel and Palestine, but also to the UK’s ‘war’ against Coronavirus and the easing of lockdown restrictions after which people are finally ‘gettin’ together again’.

These songs can therefore echo the popular discontent of any country during any chaotic period of history since the 70s, not just towards the US government facing pressure to withdraw American soldiers from Vietnam. Yet Gaye challenges the political status quo in a way that resists progressive, revolutionary angst. Each song simply begs a question: what’s going on? what’s happening? why is there strife and why should things remain this way?

Each song simply begs a question: what’s going on? what’s happening? why is there strife and why should things remain this way?

Other timeless topics such as climate change and pollution are treated in Mercy Mercy Me (The Ecology): ‘Ah, things ain’t what they used to be/ Where did all the blue skies go? Poison is the wind that blows/ From the north and south and east’ . Urban poverty and the financial challenges to the everyday man provide the central threads of Inner City Blues. Flyin’ High in a Friendly Sky puts politics aside and elevates the listener to a more spiritual plane. The song is about enduring faith and love as an antidote to personal challenges and hard times.

In celebrating this album 50 years on, there is no surprise its magic has endured for decades. It’s a true concept album, an anthem for the ages ever to be admired for its versatility, not only appealing to the hippy within but challenging the listener to ask serious questions about the current political climate whilst simultaneously allowing for a blissfully soulful escape.