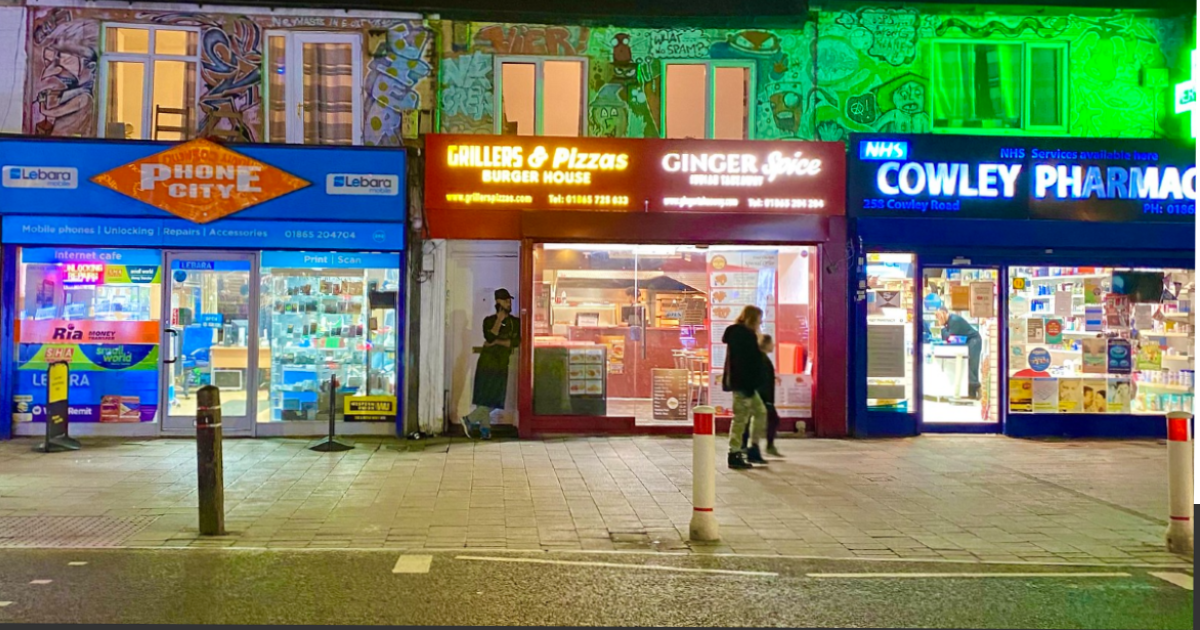 What do you mean “deep Cowley”? Where the **** is the Christian Life Center? This must be further than Brookes!

If you live East of Divinity Road, then you will have weathered these thinly veiled barbs from wide eyed ‘shallow Cowley’ dwellers. You will have endured the wrinkled lip of mocking incredulity as they complain about the (short) cycle it takes to get to your house. Why?

Because you have culture. Your riches outshine the coffers of St John’s and the big pharma-billions of the Sackler donations. Yours is chilled Bucky from the Dodgy Deli. Yours is kilogram tubs of hummus from Erdem Food Centre. Yours is complementary prawn crackers from Jin-Jin. They will never appreciate the gastronomic delights which deep Cowley alone can offer. Well, not until they have read this…

I am still unsure why ‘The Deli’ has gained such a cruel and undeserved moniker. Sure, its wide range of imported international lagers violates several UN trade embargoes, but what student doesn’t want criminally good value? It is the only place in Oxford which reliably stocks the ambrosian nectar aka Buckfast Tonic Wine. And if you ask nicely, you can ask for a pre-chilled bottle. I am delighted to inform readers that they are currently pioneering a loyalty card system involving a free bottle of prosecco…the delights of the Deli are truly limitless.

Lowest price per gram of hummus in Oxford. One star food hygiene score (as of February 2021). You win some, you lose some.

Prices so low that it can’t be legal. On Tuesdays at 6.30pm, the Christian Life Center Car Wash is swarmed by hundreds of Deep Cowley Pilgrims. What could attract such impressive queues? Not spiritual nourishment but the far more corporeal sustenance provided by ‘‘The Fish Guy”. (Yes, his name choice is somewhat uninspired but he’s bought the web domain now so it’s probably too late). Dealing out the back of a large unmarked white van, on my first visit I expected ‘William’ the Glaswegian to offer me a knock-off Kalashnikov or at least a brick of Soviet cigs. Fortunately, I was instead greeted by a crawling, swimming mass of lobsters, salmon, mussels and every evolutionary step in between. I was convinced of the freshness of his wares after a particularly lively (aggressive) interaction with his lobsters. Queue 15 minutes early to avoid disappointment, they always sell out.

Combining an old fashioned English boozer with a Nepalese curry house shouldn’t work. The decors are too discordant. The flavours are  too divergent. The wines are too varied. And yet this most ambitious of Cowley crossovers is a surprising success. It boasts the cheapest pints outside of Spoons and serves delicious Chicken Kormas, prepared (almost suspiciously) rapidly. I have every confidence that within five years it will be transfigured into another soulless Oxford gastropub where a pint costs your right kidney and the naming rights of your first born…but for now, ‘The Donny’ is the best pub in Oxford.

So give deep Cowley a chance. Take the road less travelled (unless it’s through that scary graveyard opposite Co-Op). Dare to eat a peach (from the Al-Amin Foodstore).

A verse or two for your poetic pleasure:

If you can fill the unforgiving minute,

With sixty seconds’ worth of cycling up the Cowley road,

Yours is deep Cowley and everything that’s in it,

And—which is more—you’ll be at the Dodgy Deli, my son!