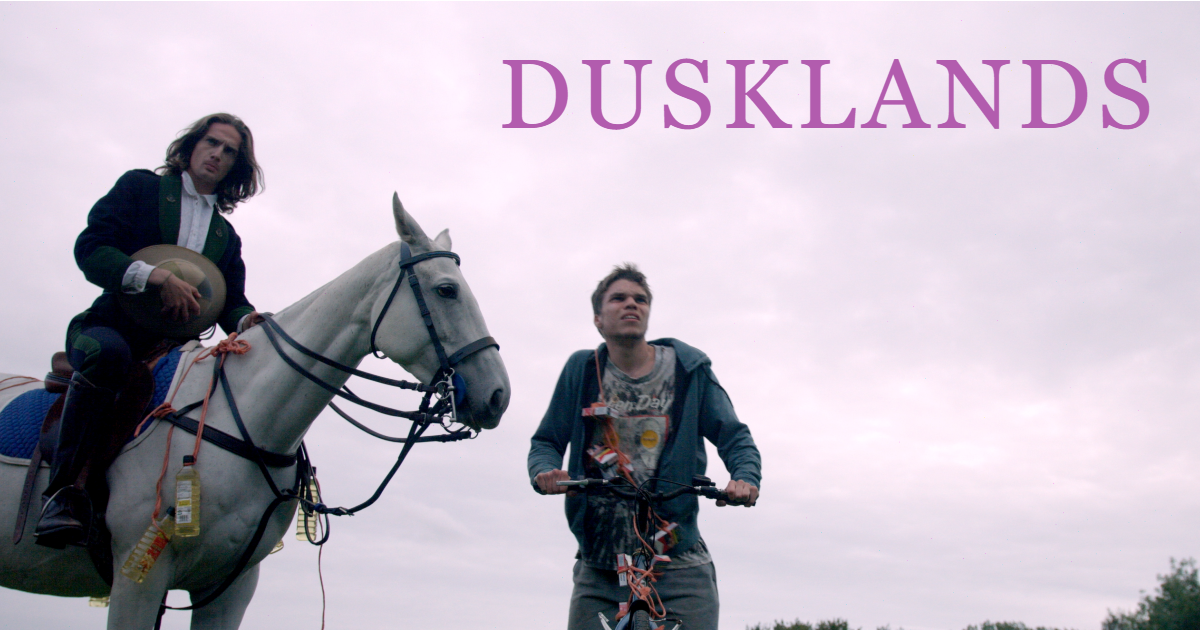 Image description: Man on horseback with man next to him on a bike in front of a pink sky with the title ‘Dusklands’ in pink font

Dusklands is difficult to describe. In the words of its director Bruno Atkinson it is a ‘post-colonial, post-virus Don Quixote, which just happened to be filmed.’ The short film has been adapted from an original short story by Toye Oladinni (‘In a Quiet Country House in Caterham’) and was written at the peak of the COVID pandemic. A strange, slyly humorous narrative with elements we can all relate to, Atkinson does an excellent job of transmitting Oladinni’s tale to the screen in this snippet of brilliance.

Indeed the craziness of the shooting according to its director (‘The shoot was so hectic, in fact, that I barely had time to direct – rather, my approach was to point a camera in the direction of a suited and mounted colonial officer and to shout at him to shout at others.’) is mirrored in the bizarre nature of the story. Robert Kipper (Kipling) over lockdown buries himself in 19th century British history and before he knows it becomes an embodiment of all those ‘great British heroes’ of yesteryear; Charles Gordon at Khartoum, Disraeli, Churchill. It is the story of a man playing out in full costume the last desperate attempt to grasp the remains of the British Empire and I am sure many viewers will be able to find parallels in people they know and have met at Oxford.

Dusklands brilliantly highlights the absurdity of the notion of British exceptionalism in a modern age and is perfect for a post-Brexit, neo-nationalism Britain. Only recently the Prime Minister gave the go-ahead for a national day of celebration in schools including cringe-worthy songs.

It took me a little while to absorb myself fully into the world of Kippers. Atkinson presents a jarring mixture of modern and historical, which, of course, is the point. But the History student in me cried out for consistency. However, I was brought round by the subtle comedy which underscored the entire film. Kippers’ inability to get his noble steed moving in the opening moments was a symptom of the absurdity of the whole tale.

Dusklands brilliantly highlights the absurdity of the notion of British exceptionalism in a modern age and is perfect for a post-Brexit, neo-nationalism Britain.

The interactions between Kippers and Gladwell (Rory D’Angelo) were strange and endearing. The shots of their first meeting were excellent; across the river, under the bridge and in front of a wall of graffiti they squabble over pay in shillings and pounds. I commend cameraman James Crick for his excellent work, he was able to highlight the unlikely yet charming pairing.

I particularly enjoyed ‘Meeting with a hostile native’ scene which had about it an air of ‘The Office’ with its quick cuts, side eyes and choppy camera work and which was the style for much of the short film.

The denial of Kippers as he faces the real world is both humorous and tragic and a representation of many Brits today, for some it might strike too close to home. As with all good comedy, there is a sadness to it. Overall I thoroughly enjoyed it. The direction was excellent and beautifully translated page to screen. I look forward to anything else produced by Atkinson as part of Oxford University Film Society.

You can find Dusklands here